A lot of developments in The Big Ten on Saturday.  The Big Ten is now a three team race, the Gophers aren't in last place, Michigan's defense scored a touchdown, and Wisconsin just scored again.

Every game had a 'Point And Laugh Hysterically' moment for me, so let's cut to the chase and get on with the mocking review. 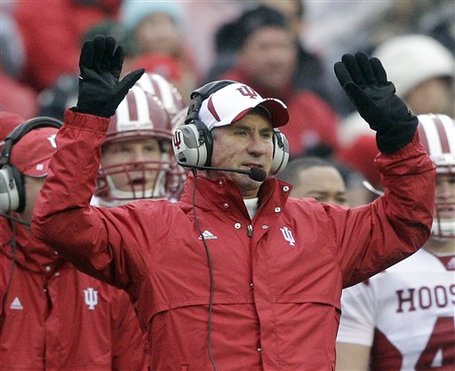 Brevit General George Armstrong Custer reacts when he surveys the ground at the Little Bighorn.

I didn't think Indiana had much of a chance at Camp Randall, but I didn't think they'd impersonate the 7th Cavalry in Montana, either.  This season has officially gone from borderline bowl team...to disappointing...to Jesus Christ, Minnesota is ahead of us in the Big Ten standings.  And for all of you whining about Bret Bielema being a 'poor sport' about running up the score, I say tough.  When you can't stop 4th stringers and walk-ons, you deserve to have 100 hung on you.  And you deserve to be last in the Big Ten. 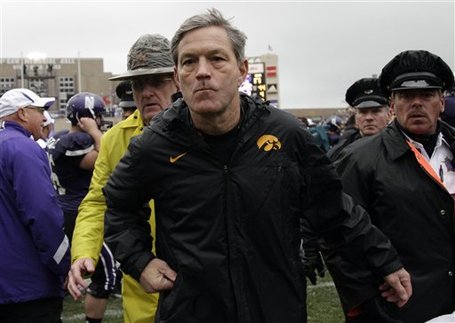 Kirk Ferentz rushes to the locker room to change his drawers, cuz he looks like he just shit hisself.

Ever since I started writing for OTE, I've tried to take a 'Big Ten First, Ohio State Second' approach to writing here.  But I have to get something off of my chest:  I can't stand the unfounded smugness of some Iowa fans.  Both of my brothers that follow football live in and are hence huge Iowa fans, and all of their friends are huge Iowa fans, and where they get their arrogance from baffles me.  At least I get mine honestly---OSU has a tradition of winning championships and NOT losing to teams they shouldn't to, on a regular basis, at least twice a year.  And to hear them bitch and piss and moan after the Hawkeyes lose to Northwestern...every goddamn year...is music to my pompous, arrogant, OSU fan's ears.  It's like listening to the Vagina Monologues meets the Farm Report.  As for Northwestern, it was a bittersweet win, as QB Dan Persa is lost for the year with a ruptured achilles tendon.  If it's any consolation for Northwestern fans, his last play of the year was the game winner to beat Iowa.  Again.  Now we get to see what freshman Evan Watkins can do.  If recent history is any indication, he'll beat Iowa three out of four.  Oh, and stop with the 'the better team lost' argument, Hawkeye fan.  When you drop 5 of 6, you are NOT the better team.  It's embarrassing for you and uncomfortable for me. 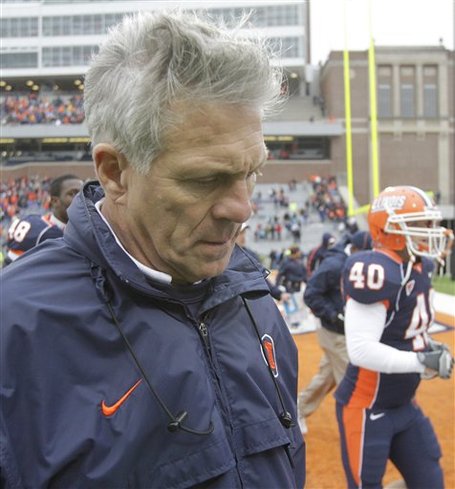 Minnesota's season was done about a month ago, and it could've been easy for them to roll over and go all Dallas Cowboys at Green Bay.  To their credit, and to interim head coach Jeff Horton's credit, they still show up to play every week.  DeLeon Eskridge had three TD's, including the game winner with just 16 seconds left, and that capped an 80 yard drive engineered by senior QB Adam Weber.  Look, this is still a bad team, and I'm not trying to look more into this than there is.  And all this was was a a bad team getting the better of a superior team on an 'Any Given Saturday'.  As for Illinois, I thought last week was a bit of an aberration, but after a second consecutive week of getting pushed around defensively, the Illini now have a problem.  Their defense has been exposed by a very good Michigan offense (somewhat understandable) and a mediocre Minnesota offense (not so understandable).  While a bowl seemed a lock two weeks ago, it's now a chore, as they face Northwestern next week at Wrigley Field, and then San Jose Fresno State to end their regular season. 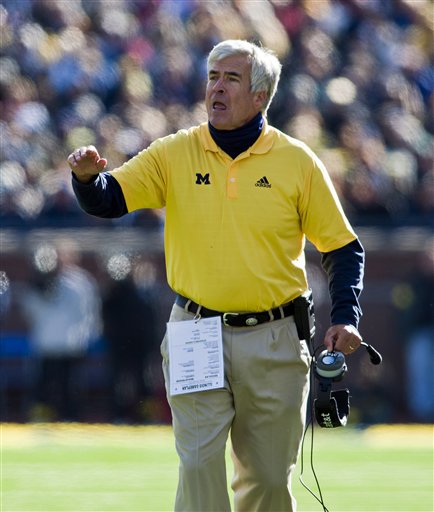 Purdue made this guy look like he knows what he is doing.

Okay, I know Purdue was tapped by The Football Gods to play the role of Job for the 2010 season, but me, my 80 year old dad, and nine other guys could light up Michigan for at least 28, minimum.  Give me a good kicker and it would be 34.  Not only did Purdue make Greg Robinson look like a defensive Vince Lombardi for a day, but the Michigan defense even scored a TD.  When you add to the fact that 6 of Purdue's points came off of a pick 6, Michigan's defense didn't give up a touchdown.  That's like making a porn movie without sex scenes--it just doesn't happen.  When you add that to the Gopher win, I'm starting to think that there might be something to this Mayan Apocalypse stuff. 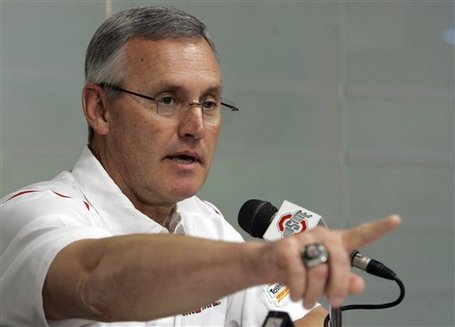 Still pissing excellence and pissing off the rest of the Big Ten because of it.

As the dust begins to settle, those of you who were dancing on Ohio State's grave up in Madison might be tending to some sprained ankles right now.  As usual, Ohio State rebounded and has taken care of business.  And while pretenders have come and gone, again, they are in position for at least a share of the Big Ten title.  Again.  And a BCS bowl.  Again.  As for Penn State, they played a good game, and I came away impressed with Matt McGloin.  What was a position of weakness (QB) will be a definite strength for the Nittany Lions next season, and they are set up well to make a serious run in 2011.

Well, it's now a three team race for two BCS bowl bids, and as the weather turns colder, the Big Ten race is heating up.  It's going to be a great finish, unless you're Iowa.