The No-Nonsense Guide to the Big Ten Race

Share All sharing options for: The No-Nonsense Guide to the Big Ten Race 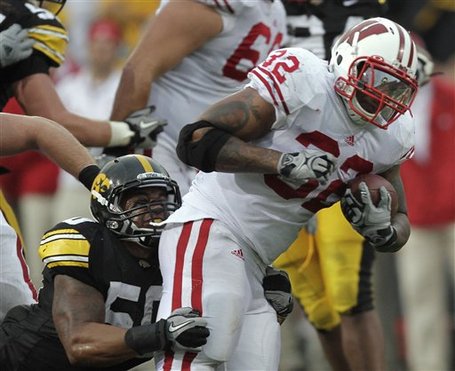 [Editor's Note: Every once in a while life gives us a good reminder that there are things more important than football.  That couldn't be any more clear over the last several weeks, as we've seen Rutger's defensive tackle Eric LeGrand paralyzed from the neck down, Notre Dame student Declan Sullivan killed in a horrible accident, and now, Mississippi State defensive end Nick Bell lose his battle with cancer.  A little over a month ago these were three healthy young men with their entire lives ahead of them.  Now, they're a solemn reminder to all of us not to take anything for granted.  I hope you'll join me in expressing your support for the people and institutions affected by these tragedies, and keep Eric and the Sullivan and Bell families in your thoughts and prayers...]

Don't let the morning frost fool you.  Things are heating up in the Midwest.  We're marching into the final month of the regular season embroiled in a four-way tie at the top of the Big Ten standings.  Michigan State, Wisconsin, Ohio State, and Iowa can claim at least a share of the title if they win out.  That's a bigger if for the Hawkeyes and Buckeyes -- who still have to play each other -- than the Spartans and Badgers, who have already navigated the hardest part of their schedules.  Still, just as there are few guarantees in life, conference football is flush with uncertainty.  To help you make the most of November, I've compiled a short guide to the conference race complete with the schedules -- subjectively ranked from most to least difficult -- and rooting scenarios to suit your various alligences.

About the only thing I can promise is we're in for a wild ride.  Let's start with the road each contender has to travel:

I assigned each team in the Big Ten a number of points based on my ballot for this week's Big Ten Power Poll.  I followed the descending scale used by the AP and Coaches Polls whereby first place is worth twelve points and last place is worth one point.  I then totaled the points for the teams on each championship contender's remaining schedule, and added two extra points for each away game.  Under this system the team with the highest number of points has the most difficult schedule.  The contender's schedules are ranked below in order from most to least difficult.

Don't get me wrong.  You can make a good argument that it's actually Ohio State that has the toughest road to travel.  Still, results are results, and I'm sticking with my formula and a team that will play 3 of its final 4 games on the road.  Iowa travels to Bloomington this week, and Evanston next week.  While the Hoosiers defense might not scare Ricky Stanzi, Northwestern's defensive line certainly will -- and don't forget that the Wildcats have had the Hawkeye's number as of late.  Last year Iowa was 9-0 and first in the BCS Computers when Pat Fitzgerald and Corey Wootton came to town -- leaving a trail of twisted ankles in their wake.  Iowa's reward for surviving the pink-o scare?  A visit from Ohio State.  The good news is the Hawks have home field advantage.  The bad news is that doesn't mean much to Jim Tressel who -- aside from a momentary lapse in 2004 -- has nothing but good memories in Iowa City.  Last, and well...least, Kirk Ferentz's squad will travel to Minneapolis to bully the embattled Minnesota Golden Gophers.

Path to Pasadena: Win out and root for Wisconsin to lose again.  If the Badgers fall in Ann Arbor or when Northwestern comes to town an Iowa victory over Ohio State will leave the Hawks tied with Michigan State atop the Big Ten standings.  Iowa owns the head-to-head victory over the Spartans, so they'll prevail in a two-way tiebreaker.

BCS at large hopes: If Iowa and Wisconsin win out, and Michigan State loses the Hawks will be an attractive pick for a BCS at large bid.

Projection that pisses me off: Iowa goes 4-0 down the stretch, defeating Ohio State at home.  They finish in a two-way tie at the top of the conference standings with Wisconsin, but don't go to the Rose Bowl because they lost the head-to-head matchup.  A 10-2 final record is enough to land the Hawks a BCS at large bid -- probably to face the SEC runner up in the Sugar Bowl. 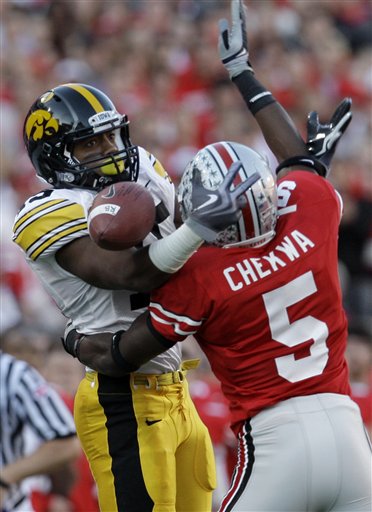 If it comes down to these two it's going to be a long night for the Buckeyes.

The Buckeyes are off this week, and the bye should help mend a mangled defense before the scarlet heads into the meat of their conference schedule.  A visit from a Penn State team that was born again against Michigan will be followed by the aforementioned clash at Kinnick with the Hawkeyes.  Finally, there's the obligatory visit from the Wolverines in the 107th edition of The Greatest Rivalry in All of Sports A Great Rivalry on Life Support.

Path to Pasadena: Same as Iowa: Win out and root for Wisconsin to lose again.  Weird, huh?  If Bucky plays sucky at Michigan or against Northwestern, Ohio State will be tied atop the Big Ten standings with Michigan State.  Because the Buckeyes and the Spartans don't play, the team with the highest BCS ranking will go to Pasadena.  That fact that Ohio State is already three spots ahead of Michigan State in the BCS standings with the toughest part of their schedule still in front of them all but ensures the scarlet will win this metric.

Alternatively, Ohio State can win out and end up in a three-way tie with Wisconsin and Michigan State.  Again, Pasadena will belong to the team with the highest BCS ranking.  Last week, it seemed possible for the Buckeyes to jump the Badgers on the strength of an out of conference win over a ranked Miami team.  After the Hurricanes' loss to Virginia -- admittedly sans Jacory Harris -- I think it's unlikely that the Bucks will muster the votes to jump the Badgers.  Still, if Wisconsin turns in lousy showings at Michigan and against Northwestern, and Ohio State dominates against Penn State, at Iowa, and versus Michigan, stranger things have happened.

BCS at large hopes: It says here that if Ohio State wins out they have an excellent chance of cherry picking an at large bid to a BCS game.  They don't call it "Buckeye Championship Series" for nothing.  No team in the country has played in as many BCS bowls as the Buckeyes, and you better believe that if a bowl committee has to choose between an 11-1 Ohio State team and an 11-1 Michigan State team Brutus is a shoe-in.  Sorry Spartans, Ohio State's national alumni base, notorious traveling reputation, and television staying power (the Buckeyes have played in one of the two highest rated bowl games for four consecutive seasons) positively eclipses your good will.

Projection that pisses me off: Ohio State goes 2-1 down the stretch, losing to Iowa on the road.  A 10-2 final record sends the scarlet to Orlando for the Capital One Bowl. 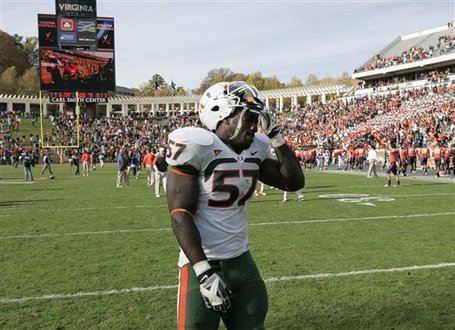 Is that a Wisconsin fan I see celebrating?

Although there's no question that the Badgers have survived the scariest part of their schedule, their final points total shows they're not out of the woods just yet.  A trip to Purdue this week and housecall from Indiana the next is followed by games at Michigan and against Northwestern.  Although Michigan's defense currently resembles the French unit that "disintegrated into a wave of refugees" in the face of the German Wehrmacht in World War II, Bret Bielema's struggles in Ann Arbor are well documented.  Meanwhile, we're still waiting on Northwestern to pull its patented conference upset out of its ass.  Long story short?  It's still a bit early to throw the confetti in the air.

Path to Pasadena: Win out and pull for Michigan State to lose.  If this goes down, the Badgers will finish no worse than tied with Ohio State or Iowa at the top of the Big Ten standings.  They own the head-to-head win over both.

Alternatively, if Ohio State beats Iowa, Wisconsin will find itself in a three-way tie with the Buckeyes and the Spartans.  Since the later two teams don't play one another, the team ranked highest in the BCS standings goes to California.  See above for why there's a good chance that's Wisconsin.

BCS at large hopes: If Wisconsin wins out but somehow gets jumped by Ohio State in a nightmare three-way tie scenario, there's a great chance the Badgers will earn a BCS at large bid.

Projection that pisses me off: Wisconsin goes 4-0 down the stretch, splitting the conference championship with Iowa.  The Badgers go to the Rose Bowl for the first time since 1999 on the strength of their head-to-head win. 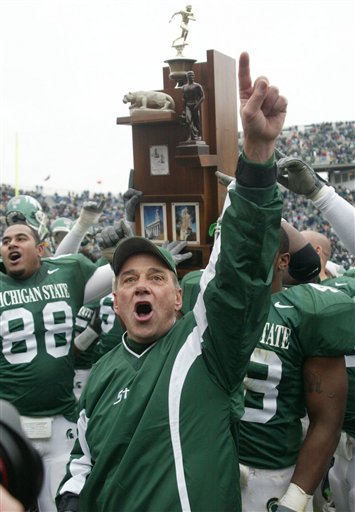 Win it and hope.

On paper, there's no question that Sparty has the most favorable schedule down the stretch.  Still, any Michigan State fan will tell you there's no counting chickens before they hatch in East Lansing -- especially after last week's sobering beat down in Iowa City.  The Spartans play Minnesota at home before resting up during a bye week.  They'll then get Purdue at home before they make a encore appearance in Happy Valley.

Path to Pasadena: Win out and pray the Buckeyes lose to Iowa.  That all but ensures a three-way tie with Wisconsin and Iowa for the tournament of Roses.  Iowa drops out because its out of conference loss at Arizona gives it a worse record than the other two contenders.  Sparty's head to head victory over Wisconsin then sends it to Pasadena.

BCS at large hopes: Win out, finish in a three-way tie at the top of the conference with Ohio State and Wisconsin (in which Bucky goes to the Rose Bowl), and pray.  Seriously.  That's it.  If Ohio State loses to Iowa the Spartans are back in a three way tie with the Hawks and the Badgers, and -- as explained above -- they go to the Rose Bowl on the strength of their head-to-head win over Wisconsin.  In other words, it's Pasadena or bust for Mark Dantonio.

Projection that pisses me off: Michigan State loses in its regular season finale at Penn State, giving it a 2-1 record down the stretch.  The 10-2 Spartans special season is soured by a sloppy-seconds bid to the Outback Bowl.