Despite Northwestern Loss, a Classic and Memorable Wrigleyville Experience

Share All sharing options for: Despite Northwestern Loss, a Classic and Memorable Wrigleyville Experience

Sandwiched in there was a football game that caused me to both cringe and utter the phrase, "For the first time in my life I feel like a Michigan fan..." We'll talk about that more a bit later, much as I wish I didn't have to.

But let's back up to the fun stuff. I got up early in the morning with the mission that I was going to go down to Wrigley and see parts of ESPN Gameday before I started my tailgating in earnest. I had considered going at o'dark hundred to actually get myself into the pit in front of the Gameday set (hoping that my use of a Wildcard and Northwestern t-shirt would mask the fact that I was a graduate student), but ultimately my desire for sleep won out. So after the sun had come up I made my way, coffee and scone in hand, to Wrigley... 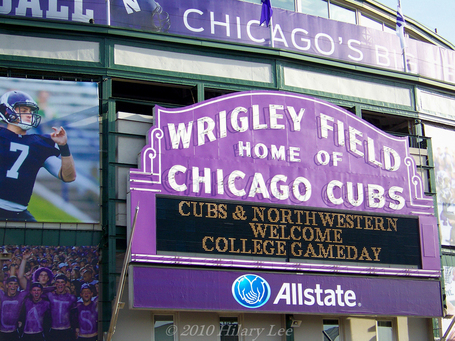 The neighborhood around Wrigley was mostly quiet until I got to the area of about Sheffield & Grace. I think the pushed back start time of the game had something to do with this... only the really diehard fans and curious ESPN watchers decided to start their days down at Wrigley, rather in their own tailgate parties elsewhere.

Still, many of the apartment buildings and houses in the area were decked out with purple or orange and blue, and as I got closer to the crowds gathering outside of Wrigley I began to hear sporadic "Go U! NU!" and "ILL ... INI!" chants. As confusing as this was to my mostly un-caffeinated brain at first, it was cool to be hearing this outside of the place that I normally associate with summer and baseball and hot dogs. 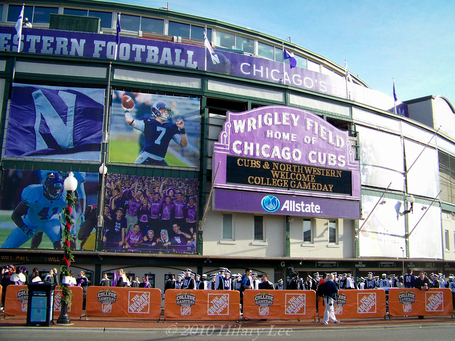 This is a portion of the over-flow section of the Gameday crowd. The real craziness was behind me.

Eventually I got myself to the area of Gameday. My view of the set was a bit obstructed by the crowds who had already showed up, but I got to see quite a bit of it anyway. I was also treated to a few performances by the Northwestern marching band outside of the field, which I thought was really nifty. I've seen them many times before, of course, but I hadn't actually ever been that close. It reminded me quite a bit of trips up to Camp Randall when I was younger, where the Wisconsin marching band would play and walk towards the stadium through the crowd before the game. 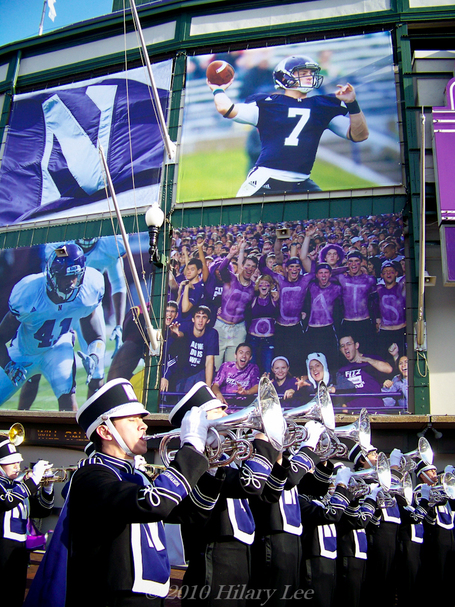 Click to watch a short video of the band playing

Watching Gameday amidst a group of Cats and Illini fans was a ton of fun - everyone was totally into it and the Gameday crew and hosts were very nice to the crowd. It might seem silly that I was so excited about it, but I had never seen Gameday in person before, and I watch it pretty much every Saturday morning during the season. 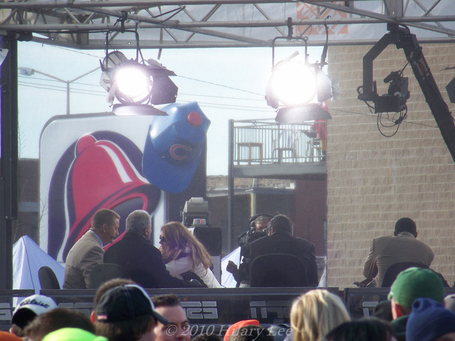 After the Gameday broadcast had concluded it was time to tailgate in earnest. I made my way over to "Wildcat Way" - a section of tent and closed off street along the east side of Wrigley that Northwestern had set up to house fans prior to the game. I just have to say: a covered tent with space heaters, flat screens showing all of the 11:00 games, and beer was genius. If Northwestern can find some way to make the pre-game environment at Ryan Field half as exciting as it was at Wrigley next year, I'll be a very happy camper.

I spent the next several hours hanging out with people, drinking, and watching my Wisconsin Badgers curbstomp Michigan, which is always a good time. One of the more interesting aspects of this period was the number of people who were fans of both NU/Illinois and another completely different Big Ten team. I think much of this can be attributed to the fact that going to this game cost a decent amount of money, which drew more older alumni, some of whom definitely had attended more than one Big Ten school. Though this was a bit unexpected, it did make this section of my morning that much more enjoyable. Which, considering what I was about to endure, was a very good thing. 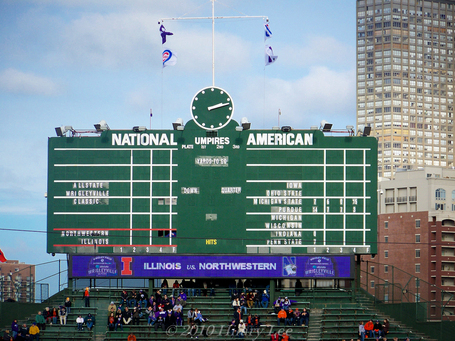 Eventually, it was time to head into Wrigley for the game. The field was absolutely packed by kickoff time. I haven't seen it that full in quite some time - even the standing room only areas were occupied. The atmosphere was pretty awesome, though it was definitely much more like the games I've gone to at schools with a ton of tailgating ahead of time, rather than those I've attended at Ryan Field. I was impressed with the amount of purple in the stands, and happy to see that Northwestern fans did turn out. My own seats were in the corner of the west end zone, about 30 rows up, which, with the rule change to use only one end zone, ended up actually being nice. Unfortunately I was also right in the teeth of the cross wind that blew in from left field... I lost feeling in most of my body by about a quarter and a half in. 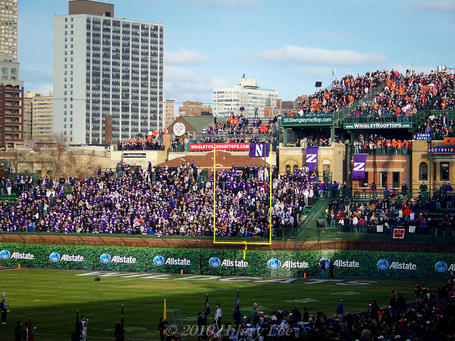 The game itself... well... I don't even really know what to say. I was nervous going in, but ironically it had been because of the loss of Dan Persa. I never considered that I would be treated to the absolute shit storm of a defensive performance that I was. I mean, don't get me wrong, it's not like I had thought the Wildcat defense was good... we hadn't held an opponent other than Illinois State to less than double digits all year, but I just sort of expected that we would allow somewhere in the neighborhood of 14-25, and find a way, without Persa, to outscore them.

Indeed, I don't think, given Northwestern's previous performances this season, that those expectations were unrealistic. Even against teams with decent rushing attacks, and the gashing by Michigan State in the 4th quarter of that game, and by Adam Robinson for good chunks of the Iowa game come to mind, the ‘Cats had largely been able to hold their own. I mean, 500+ yards allowed on the ground? You have got to be kidding me. If anyone, Illini fan or otherwise, tells you they saw this coming then they are lying. Seriously. 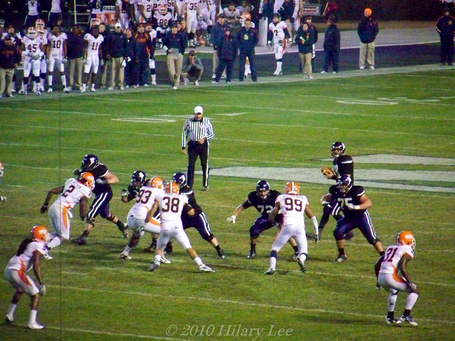 Much as I would like to be able to explain how this happened, I really can't. From the opening snap Northwestern looked completely flat. Much of the scoring in the first quarter seemed to be due to the defense not wanting to stack the box, even though that meant that Mikel Leshoure was free to rip off runs of ten, twenty, or thirty yards at a stretch. But even after the defense seemed to get over their aversion to planning for the run, they still couldn't stop the Illini with any consistency. A lot of that had to do with the tackling.

Oh my god. The tackling.

It was so terrible. So many arm tackles. All too often, Leshoure (or even occasionally Scheelhaase) would slip right through the hands of their first and second defenders before getting run down from behind. Embarrassing is really too kind of a word for it. Yes, I know Leshoure is an NFL caliber RB, but, still. The only bright spot on the defense was the play of Brian Peters, who intercepted two passes, including one returned for a touchdown right into the welcoming cheers of the students in the east end zone. 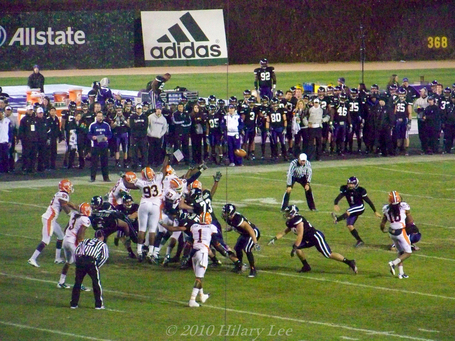 Things weren't much better on the offensive side of the ball. This was mostly to be expected, though. Mike Trumpy's 80 yard run was a bright spot, but the ‘Cats offense had trouble getting going all day. A lot of this was due to Evan Watkins, to be sure, but you have to go easy on the kid. It was his first real start, and it's got to be intimidating having your first start in an atmosphere like that. More blame, I think, can be placed on the shoulders of the o-line.

The truth is, they haven't been playing well all year, but the fact that Dan Persa was so good at slipping out of on-coming defender's grasps masked it for much of this time. Watkins is not nearly as mobile as Persa was, and with the pocket collapsing around him so regularly, it shouldn't really surprise anyone that he wasn't able to connect on most of his throws. He does have quite the arm, though. I think if the ‘Cats can find a way to improve their o-line between now and the time when he might become our primary starter (2012-ish, unless Kain Colter or Trevor Siemian grabs the job first) then he could be very dangerous. Whether this improvement has to come from recruiting better talent or a change in assistant coaching staff, I don't know. But, without such improvement, you better believe we'll be witnessing more games like this two seasons down the road.

But you know what? Even despite all that, this game was a lot of fun to be at. I was down in the concourse when the Wildcats scored late in the second quarter to tie the game, and the reaction of the fans was just so awesome. Post-game, Wrigleyville was great too. I wandered with a friend down a mostly closed off Clark street, and after about 35 tries, we finally found a bar with a place to sit and continue the evening. Though I know many members of the media made quite the stink about the rule change and the field dimensions, I sincerely hope that the conference finds a way to have a game at Wrigley again in the future. If not next year, then maybe a few years down the road. This was a day that I will never forget, and I hope that more fans will be able to have the opportunity that I had.

Before I close this off, I do have to issue congratulations to Mikel Leshoure. He really came to play yesterday, and though his record breaking performance came at the expense of my team, it was at least nice to see it happen to a decent guy like him. I wish him luck and hope that he stays healthy and goes on to have a great pro career.

So... on to the most difficult game of the season (as a fan) for me. Given the way the ‘Cats played today, the purple half of me is not optimistic about this coming Saturday (of course, that makes the Badger half of me very happy, but let's not go there). I think, realistically, Northwestern will finish with seven wins and be looking at a trip to Dallas this year (hey, at least it's not Detroit, right?). I guess that could be considered a let-down from last year, but if our "rebuilding" years are going to look like six-to-seven wins and a bowl trip, then I'm a happy Wildcat. Much better than the rebuilding years of our in-state friends down south, anyway.