In Heaven, There Is No Beer*

Share All sharing options for: In Heaven, There Is No Beer* 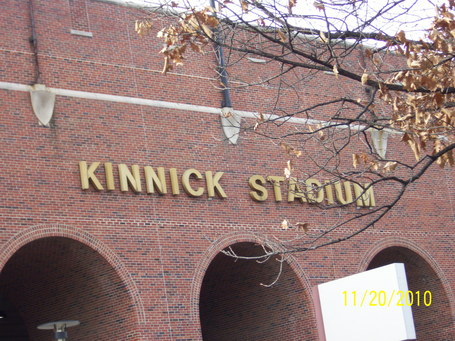 *That's why we drank it here

There are few things that are more American than tailgating at a college football game, and nothing compares to tailgating in the Big Ten.  I've been fortunate enough to go to three Big Ten venues to tailgate this season, and this past Saturday, I saved the best for last--Kinnick Stadium, home of the Iowa Hawkeyes.  The fact that there was a great game after the tailgating was a bonus.

The Iowa tailgate experience, after the jump.

Saturday broke clear and cold--football weather in the midwest.  Perfect..  My brother Brad and his wife Susan have had season tickets for the Hawkeyes for almost 20 years, and were gracious enough to invite me to the OSU-Iowa game.  We got to the tailgate site about 7'ish, and I was met by a horde of Hawkeye fans, good friends of my brother, and they've all tailgated together for years.  They even let me take a picture with them and they didn't throw beer on me!!  Of course, as I was informed after the picture, it would've been a damn fine waste of beer to do that.  In Iowa, they don't do stupid shit like that, or set cars on fire in post game celebrations. 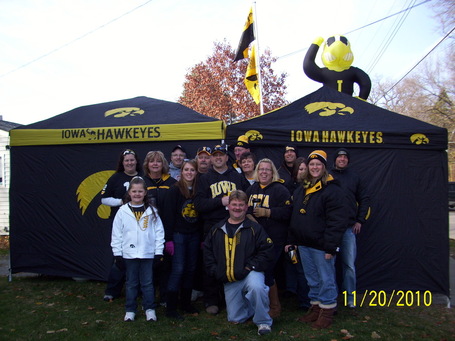 Black and Gold is all the rage in Iowa City

The food was very much like a Lutheran Pot Luck:  Everybody brought their best dish, none of it was bad, and there was enough to feed an army.  And that was just breakfast.  You see, this was a 2:30 kickoff, which means that you had better plan accordingly when it comes to beer consumption (I did, thanks for asking).  You had also better plan accordingly for food (again, we did, thanks for asking--seriously, does it look like I've missed a meal in about five years?).  After breakfast, my other brother Travis showed up, and we wondered aloud how a team as talented as Iowa's had three losses on the season, and from their perspective, how the hell a guy that wears a sweatervest can have success at the Big Ten level.  It really didn't matter, because we were tailgating, in America's heartland, less than a mile from America's quarterback.  It was all good. 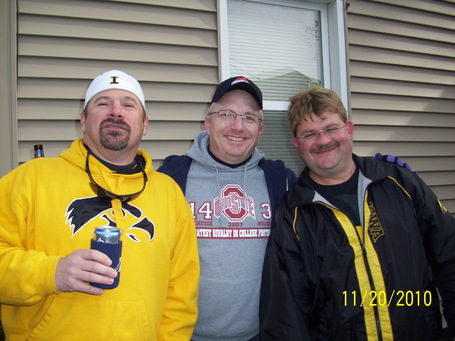 One of these things is not like the other...

About the time I was starting to feel outnumbered, Jonathan called.  [Editor's Note: Our other resident Buckeye adds his take of the Iowa City experience below in the epilogue.]  Coincidentally...or maybe not...it was just in time for lunch, but he had Ohio State reinforcements, and even though they had enemy colors, they were welcomed with open arms and a grilled pork fillet sandwich. 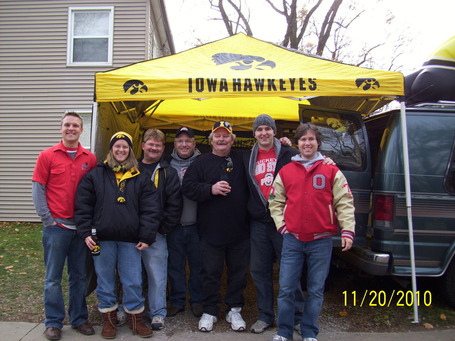 I gotta say, there was a lot of good natured banter that went back and forth, but Iowa fans are the class of the Big Ten.  Folks that barely knew me and my OTE friends welcomed us with open arms, fed us, and gave some visiting OSU fans good info on where the best seats were when going in search of tickets.

Once inside the stadium, I was a lone Buckeye as far as the eye could see in a sea of Black and Gold, and I have to say, Iowa fans were the most good natured fans in the stadium as well as outside.  It was a tough loss for Iowa, and I kind of expected some comments hurled my way just out of frustration, but there were handshakes, congratulations, and well wishes for the Michigan game.  Iowa fans don't like Ohio State, but they hate Michigan almost as much as OSU fans do.  At least that's what they told me to my face.

Anyway, I just want to say thanks to my big brother Brad and the good people of Myrtle Ave in Iowa City for letting an OSU fan crash their Iowa tailgating party.

Thank you for a fantastic time, and I hope to make it up there for a game next year. 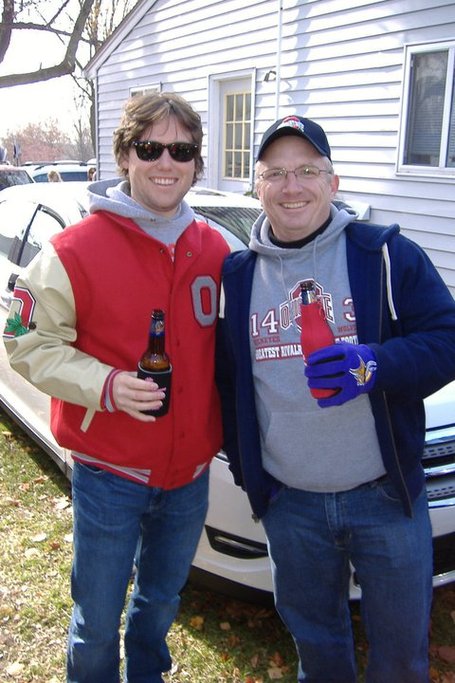 We left Columbus bright and early Friday with a full tank of gas, a Naked smoothie, and two tall Styrofoam cups filled with black coffee for the 632 mile trip to Marshalltown, Iowa.  I was anxious, but for once it wasn't the game I was nervous about.  It was my results on the California Bar Exam which were scheduled to be released at 8:00 p.m.  After three relentless years of law school, a summer sequestered in Santa Monica studying 12 hours a day seven days a week, a three day exam, and four months of waiting, just twelve hours stood between me and my future as a lawyer.

Luckily, Brad -- a law school colleague -- was great company, and we eased into a ten hour conversation on college football, politics, situational comedies, and architecture (a personal favorite).  We stopped for lunch in Champaign, Illinois, and took a short tour of campus -- culminating in a drive by Memorial Stadium.  I was impressed by its handsome Neoclassical exterior, though we both agreed that the new renovations made the facade look a little busy.  We burned through another tank and a half of gas, and reveled at the flat expanses of the plains.  "They're like oceans," said Brad.

It was dark by the time we pulled into our friend's driveway in Marshalltown.  We sat on the couch drinking Fat Tires and discussing Executive Powers while I waited for the bar results.  At 8:00 p.m. I opened my laptop and everybody left the room.  I pulled up the State Bar website, and entered my ID.  A pause, then:

The name above appears on the pass list for the July 2010 California Bar Examination.

I thanked God, then walked out into the kitchen where Robbie opened a bottle of champagne.  The weekend was on.  We drove over to Rube's Steakhouse, a quintessentially Iowa establishment where you grill your own steak, texas toast, and vegetables.  I selected a thick New York Strip, and doused it with clarified butter and garlic powder before throwing it on the coals. 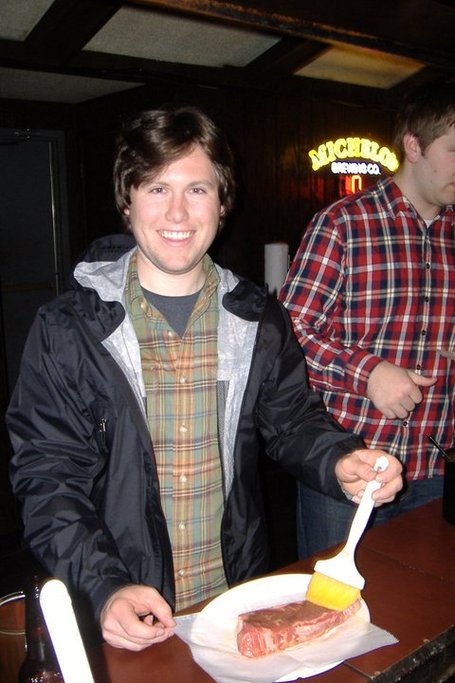 We left early for the two hour drive to Iowa City the next morning.  On the freeway Iowa fans leaned out of their cars to taunt us.  We reached campus around 10:00 a.m., and drove around with the windows down and The Buckeye Battle Cry blaring on the stereo to get our bearings.  Then we turned the Garmin to Kinnick Stadium.
I've seen Kinnick a hundred times on TV and I have to say aerial shots don't do it justice.  The stadium sits on the edge of town, like a frontier fort -- with beautiful open arcades, brick arches, and iron gates.  The grounds around the stadium are well planned, and tailgating lots spread out in all directions like seventeenth-century colonial settlements.

Ted was kind enough to invite us to his family tailgate and we were welcomed with open arms by the locals.  We lit a few thick cigars and got down to business talking about the matchups that would make or break the game.  We didn't know how fortunate we were when Ted's brother-in-law fired up the grill.  His pork sandwiches were absolutely to die for. 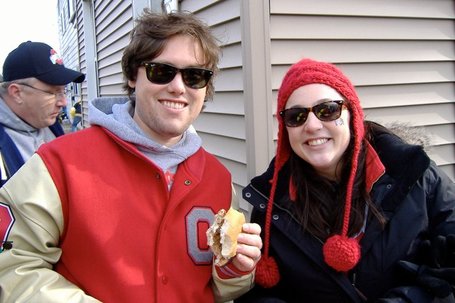 We scalped tickets on the way to the game ($146 and a cigar for a pair) and got to our seats early.  The Iowa fans around us were thoughtful and welcoming.  The point of this post isn't to recap the game itself, but I will say if you had told me last week that Ohio State would go on the road against a ranked opponent, commit twice the number of penalties, be minus two in turnovers, and come out with the win I would have said you were crazy.

Fortunately stranger things have happened.  The escape was the perfect ending to an amazing Big Ten weekend, although I will admit that after passing the bar I felt like I was playing with house money.  After the scarlet ran out the clock, Brad and I jumped down onto the field and raced around the north endzone to sing Carmen Ohio with the team. 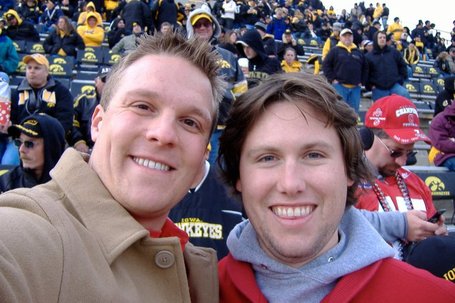 We walked downtown along the river, our fingers numb and hearts warm.  After popping in and out of a number of places, we settled on a cozy Indian restaurant off the beaten path.  Although I don't usually associate Indian cuisine with football, the coconut curried vegetables, soft nan, and rice pudding were pure comfort.  We stayed in town for the end of the Nebraska game, then drove to Davenport to get a head start on the drive back.

Thanks to Brad, Robbie, Andrea, Ted, and the whole gang for making this weekend one I'll never forget.