Rece Davis and the Capital One Cup

I sat down with Coach Rich Rodriguez back in August to talk x's and o's and his thoughts on Michigan football. You can see the interview here. Since then, I've been lucky enough to talk to Desmond Howard (promoting his ESPN Mayhem Competition) and Jon Runyan (getting some national exposure during his run for Congress, which he won). Well last week, I talked to Rece Davis, the ESPN College Football Analyst and Announcer, a Mr. Do-Everything who is promoting the Capital One Cup. If you haven't heard or seen, the Capital One Cup is a competition that rewards the winning school with $200,000 of scholarship money. All your school has to do is a win a bunch of national titles (both small and major sports) and you've got bragging rights, not to mention $200,000 for grad-level scholarships. All the information for the Cup is below, you can follow it on Twitter and Facebook too.

What I really want to say about that whole interaction is wow, Rece Davis might be the coolest human being on the planet. He obviously loves college football and is remarkably easy-going and relaxed. Biggest story of the year to Rece? The Cam Newton investigation, because he believes Newton is like a larger, more talented Mike Vick and the investigation is playing out during Newton's Heisman run. Why has the national media paid little attention to a one-loss MSU team? Rece says it's because of the way the Spartans fell apart on national TV in Iowa. I'm very thankful for the chance to talk to Rece Davis and to know that some of these national media figures are down to earth people. 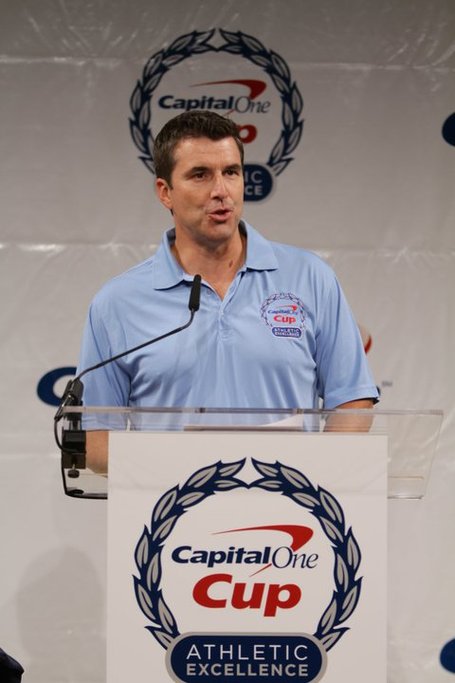 It seemed like just another crisp Midwest Saturday. But I am going to guess (just guessing) that there have never been more points scored and yards given up during a slate of in-conference Big Ten games. Defensive coordinators will shudder years from now, remembering how the injured and overwhelmed defenses were slaughtered. Stadium managers will remember replacing all the blown out light bulbs on the scoreboards. Really, I remember a time when touchdowns were at a bit of a premium in Big Ten football and we'd mock the Big 12 for their Playstation numbers. I also remember 2009, where the Big Ten boasted four of the nation's best defenses. How things have changed.

The carnage got off to a non-descript start when Wisconsin scored 24 (should have been more) first half points on the Wolverines. Saw it coming, no big deal. When the Wolverines scored three touchdowns in the third quarter though, running up and down the field with no discernable defense covering them, my mind flashed back to the 2nd quarter against Illinois, when both teams combined for 49 points. A 48-28 shellacking was the result and I doubt Wisconsin has ever scored that many points on Michigan - Stat Boy? Stat Boy says that yes, Wisconsin's 48 points were the most that the Badgers have ever scored on Michigan.

Michigan State avoided the biggest upset of the Big Ten year with a tremendous comeback, aided by Lady Luck and other factors. 21 points in less than ten fourth quarter minutes? Done. But the biggest surprise was Rob Henry's success passing with a lacerated hand. Big Ten football, where injuries miraculously heal to allow for increased passing yards. Maybe Touchdown Jesus was being warm to His in-state rival? Whichever divinity helped Henry out couldn't possibly have believed that the injury-plagued Boilermakers would score 31 points. That's their largest output during conference play. Again. Ridiculous. 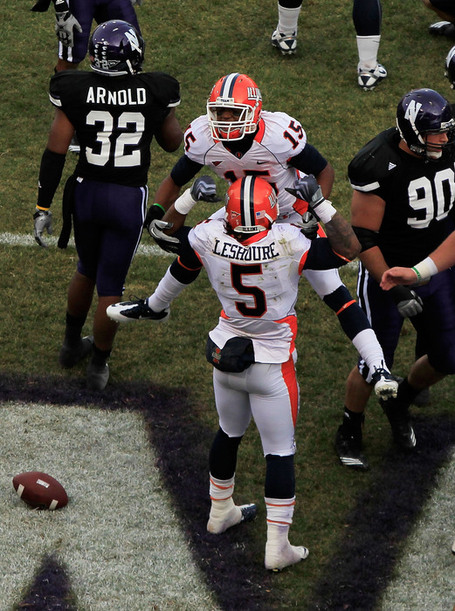 The Nittany Lions refused to buck this wonderful trend, rolling over Indiana for with almost 500 yards and 41 points, which is tied for most points PSU has scored in Big Ten competition during 2010. Indiana refused to follow up their wonderful defensive performance versus Iowa, allowing 496 total yards to Penn State.

And finally, ladies and gentlemen, Mikel LeShoure. This NFL-bound running back found the running lanes to be open on the hallowed soil of Wrigley Field, piling up 330 yards rushing on 33 carries. That's to say nothing of the 519 yards rushing given up by the Northwestern defense. What in the hell? NW was being applauded for their toughness shown against Iowa, only to fall flat in the Windy City.

There's an iconic 1960's song that says "Where have all the flowers gone, long time passing." Well where have all the defenses gone? We're going to be talking about Defenseless Saturday for awhile. How in fact did this carnage happen? Are we turning into the Big 12?

Frankly, I can't remember so many good Big Ten Quarterbacks...and so many bad Big Ten defenses. The lowest level defenses (Michigan, Indiana, Minnesota) are record-breaking bad, while the number of quarterbacks with 150+ ratings has never been higher in Big Ten history. Throw in some excellent run systems and voila, points and more points. Here are the statistical odds and ends from a ridiculous day:

Teams With Over 300 Yards Total Offense: Everyone except Iowa (276)

Passes Attempted by Wisconsin in the 2nd Half after they realized they could run up and down the field: 1