Share All sharing options for: Why Ohio State/Michigan Still Matters 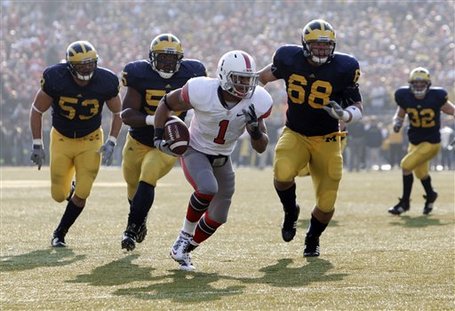 I have to admit that I'm struggling a bit to juggle the conflicting emotions of Rivalry Week and Thanksgiving.  This, of course, is the first year I can remember that the Big Ten didn't finish its regular season before turkey day, and as such I'm cycling back and forth between thankfulness and vitriol.

Even worse is this feeling I get that people are slightly complacent about The Game this year.  Don't get me wrong, it's still a hot ticket in Columbus, it's just that people seem a bit overconfident.  Yesterday I overheard someone in the locker room at my gym tell his buddy that "The Game just doesn't mean what it used to."

Although I disagree, I understand why the casual fan might feel that way.  After all, the good guys have won six times in a row, and eight of the last nine.  The last time Michigan beat Ohio State in football I was a sophomore in college -- scrawny, single, and underage.  Now, I'm married.  And I'm a lawyer.  Northwestern, Purdue, and Illinois -- perennial conference bottom feeders -- have beaten the Buckeyes more recently than the Wolverines.  In fact, I'd bet that if you asked young Buckeye fans to make a list of their most hated Big Ten teams they'd put Wisconsin and Penn State at the top.

That would be a huge mistake.  It's a sentiment that's spread throughout the fanbase like a sickness.  Six years of feast, and we've forgotten what it's like to be famished.  Let me remind you. 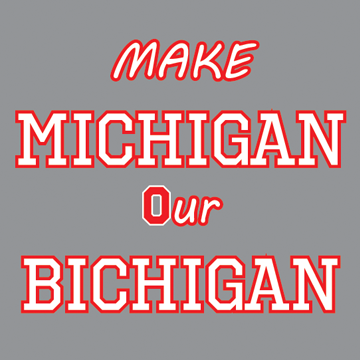 If you go to the game on Saturday, heck if you just walk around Columbus on any given weekday, you'll see T-Shirts that say "Make Michigan Our Bitchigan."  These shirts are idiotic.  Michigan is not our bitch.  Michigan has never been our bitch.

The Wolverines currently own a 57-43-6 record over the Buckeyes.  But wait, the homer protests -- 13 of those wins were accumulated from 1897 to 1918 when the Ohio State program was in its infancy.  Fine, take them away, Michigan still owns a 44-43-6 advantage over Ohio State.

What about the so-called modern era?  It's true that since 1950 Ohio State owns a 31-28 edge over That State Up North.  But a three game difference over six decades only goes to show how evenly matched the two programs are.  In fact, Ohio State trailed 25-28 in the modern era before we rattled off six victories in a row.

So the current winning streak should more accurately be cast as a Buckeye come back than a Buckeye beat down.  Sure, we've won eight of the last nine.  Michigan only lost once in nine games from 1985 to 1993.

In other words, it's been done and The Greatest Rivalry in All of Sports is that way because it's hotly contested.  Not because anyone is anyone else's "bitch." 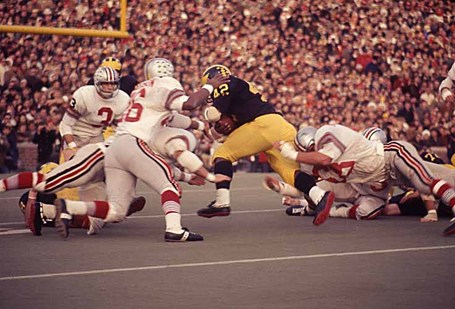 It's not just parity that makes The Rivalry sine qua non.  It's the spoiler factor.  Since 1950 the lower ranked or unranked team has won 23 times, or 39 percent of the time.  No other rivalry can match that degree of heartache.  And if history is any indication, unranked Michigan has close to a 40 percent chance of upsetting No. 8 Ohio State this Saturday.

A closely related misconception is that The Game has lost its luster because of Michigan's current slump.  People who make this claim usually support it as follows:

1. Because Michigan has underachieved The Game has been less competitive, and

2. Because the Game has been less competitive it now matters less than it did in the glory days of the Ten Year War. 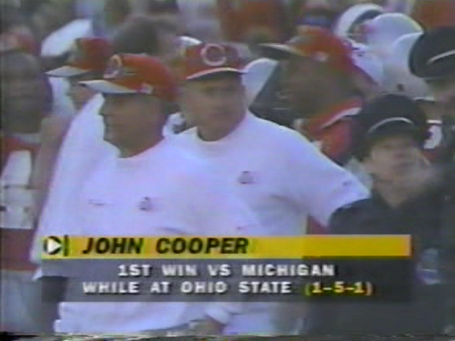 How soon we forget.

The Rivalry has gone through a period of apparent "uncompetitiveness" every 17.5 years on average.  In other words there's nothing abnormal about Ohio State's current 6 game run.

So although the intensity and stakes aren't the same, the results aren't that different.

Don't get me wrong, there's no denying that this isn't The Rivalry's finest hour.  But to suggest that it's in a persistent vegetative state, or "doesn't mean what it used to" is silly.  The Game remains one of the most celebrated and contested rivalries in all of sports, and six seasons can't change that.

Michigan fans feeling disenchanted should remember that the unranked team wins 39 percent of the time.  And, of course, that nothing lasts forever...