Hey, the DKR is back, like a long lost high school classmate that you didn't really like, but he found you on Facebook, and for whatever reason you friended him.  The last regular season without divisions and a conference championship game turned out to be one of the most exciting in years for the Empire.  Two teams we thought would be there at the end were, Wisconsin and Ohio State.  One team, Michigan State, who always has one or two (or four) 'DOH!' moments to take themsselves out of contention, didn't and wound up with a share of the conference championship.  One traditional power had an up and down season (Michigan), one contender turned out to be a pretender (Iowa), and most everybody else were, in the (in)famous words of former Northwestern coach Denny Green, who we thought they were.  Let's look at the last weekend and discuss what happened and where these programs go from here. 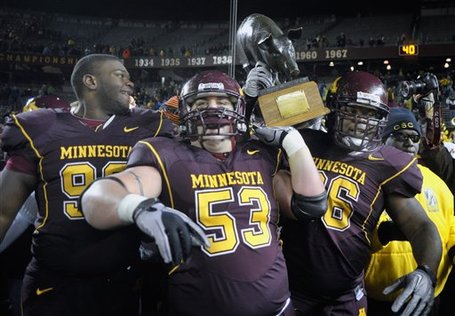 A nice way for the Gopher seniors to go out.

Iowa 24, Minnesota 27.  It is games like this that make me LOVE college football.  They say nice guys finish last, but I'd like to think that doesn't apply to Gophers interim coach Jeff Horton.  Horton just told the Gophers to remember why they play football, and they play football to have fun.  They had a ton of fun Saturday, re-capturing the Floyd of Rosedale from the Hawkeyes, and giving what is arguably the most maligned senior class in Gopher history a well deserved sendoff.  Horton won't be back next season, but I hope somebody, somewhere notices the job he did with this moribund program and gives him a job--he deserves it.  It was an inspired effort for 60 minutes, and the result was a well deserved victory.  For Iowa, wow.  They had the most talented and largest (I think) senior class in the Big Ten returning for 2010, and I thought they were a legitimate title contender.  If the reaction at Black Heart Gold Pants is an indication, some Iowa fans want to go in a new direction and let Kirk Ferentz go, and I think that's a big mistake.  There is no denying that this season was terribly disappointing, but to fire Ferentz would be akin to throwing the baby out with the bathwater.  Ferentz has done a remarkable job with Iowa, and is only one season removed from the program's first ever BCS bowl win.  Things went off the tracks this season, but firing Ferentz would be the wrong move.  They're still going to a bowl game, and will have an opportunity to use that as a springboard for 2011. 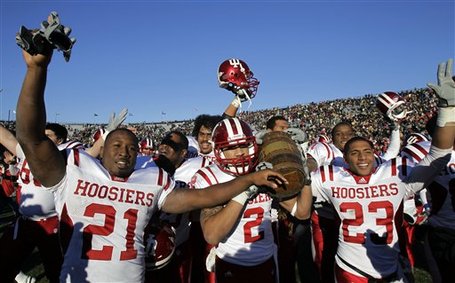 A great win by Indiana looks like it wasn't enough to save the coach's job.

Indiana 34, Purdue 31.  If Adam Rittenberg is right, bringing home the Old Oaken Bucket won't be enough to save Bill Lynch's job.  After following Terry Hoeppner, Bill Lynch was in a tough spot, but he did an admirable job and got Indiana to a bowl.  Ironically, that early success might have been his undoing, if Rittenberg's report turns out to be accurate.  The Hoosiers were a borderline bowl team entering 2010, and had not Damarlo Belcher dropped a sure touchdown in the endzone against Iowa, the Hoosiers are bowling.  Or if they had held Michigan, just once.  Or had been more consistent against Northwestern.  5-7 isn't where Indiana thought they would be, but they're not too far from where they should be, either.  I don't think it's enough to fire Lynch, but apparently that's not what the smart folks in Bloomington think.  It will be interesting to see where this ends up.  For Purdue, can we just go purge this season and forget it ever existed?  When I was a kid and I was going through a rough time, my dad would tell me what I was going through was a 'character builder', and I'd like to think that 2010 was that for Purdue.  They only won four games, but Danny Hope had them ready and competitive in just about every game, and but for a bad pick in OT on Saturday, they could've won the Old Oaken Bucket.  I think Purdue will be back and ready for 2011, as long as someone remembers to pack a bunch of spare ACL's for the team trainer. 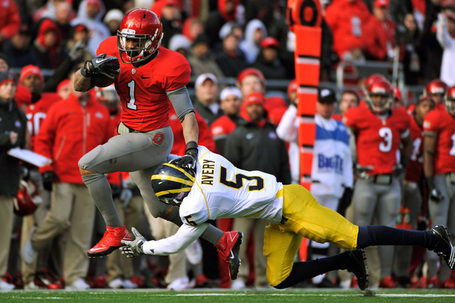 Michigan 7, Ohio State 37.  Rich Rodriguez is 0-3 against OSU, and two of those losses have been in embarrassing fashion, once again raising questions about his job security (I heard Indiana is looking.  I kid, I kid).  On one hand, you can argue that UM has improved in every season that Rodriguez has been in Ann Arbor, and you'd be correct.  On the other hand, getting beat soundly by your two biggest rivals does nothing for your job security unless you're winning every other game.  That's the only reason John Cooper hung around Columbus as long as he did.  He might have lost to UM every...goddamn...year, but he won most of his other games, and managed to win a big bowl game every now and then.  For UM, they're not even smelling a big bowl, but they are going bowling.  I will say if Rodriguez does stay (and that debate is for another post on another day), Greg Robinson almost has to see the metaphorical guillotine just to satiate the masses, doesn't he?  Ohio State has been the model of consistency since Jim Tressel came on board, and there isn't a program in the country that can match what Tressel has done in the last 10 years, at least in those terms.  Ohio State fans get too greedy, in my opinion, about demanding a National Championship every season, and need to step back and enjoy this golden era of Buckeye football.  It's become routine...routine!...for Ohio State to go to a BCS game, and they've won more of them than they've lost, including a national championship.  If Bama's projections are right, I think they'll be favored against Arkansas in the Sugar Bowl as well.  Enjoy this while it's still here to enjoy, because 25 years from now, our kids and grandkids will look back on this era much in the same way we look back on the Woody Hayes era. 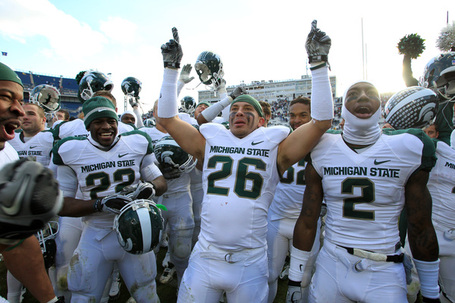 Michigan State 28, Penn State 22.  Come on, admit it--you thought MSU was going be be 'good ol' MSU' yesterday and come up short on the big stage.  This team has shut up a lot of doubters, beat Michigan handily, and won the Big Ten for the first time in 20 years.  Along the way, they've used two fake FG's to win games, weathered a heart attack suffered by the head coach, and overcame years of coming up short and stubbing their toe by beating everybody except a fired up Iowa team on the road.  It's been a program changing season for the Spartans, and even though they might come up short when the BCS straws are drawn, they're still going to get a good opponent to put an exclamation point on what has been a fantastic season.  For Penn State, is this season a disappointment or a success?  Yes, and yes.  They had a tough schedule, and struggled offensively early in the season, but along the way they found two good quarterbacks in Rob Bolden and Matt McGloin.  They'll have to replace Evan Royster, who they rode earlier in the season, but Penn State will be better next season with a more experienced quarterback situation. 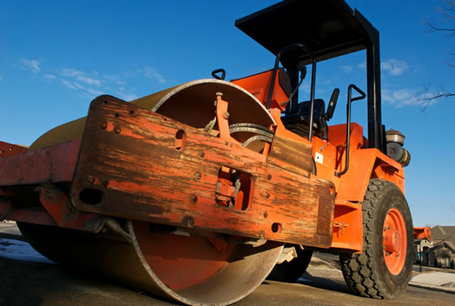 Northwestern 23, Wisconsin 70.  Northwestern's defense has survived because Northwestern's offense, lead by Dan Persa, has been able to keep up with most teams.  With Persa out, Northwestern can't stay on the field long enough to give their overmatched defense a break, and what you saw Saturday and last week at Wrigley Field is the result.   Northwestern with Persa had a vibe of 'scrappy underdog' that could play four quarters with just about everybody, and win more often than not.  Northwestern without Persa has a vibe of 'mediocre to kinda bad' football team, and I think that they're going to struggle in their bowl game.  But never forget that Pat Fitzgerald is a wizard, and wizards can pull rabbits out of hats.  Or bowl wins out of their ass.  I think you can make an outside argument that Wisconsin is the best team in the country right now.  Their running game is terrifying, Scott Tolzien is a seasoned leader and better than advertised passer, and their defense can be suffocating, if inconsistent.  But when the offense is hanging 70 or 80 a week on everyone, they can live with good but inconsistent.  There's been talk that OSU might leap Wisconsin in the final BCS standings, and I hope that doesn't happen.  Wisconsin has earned the right to go to the Rose Bowl over OSU, and I would like to see them get the opportunity.

And with that, one of the most exciting Big Ten regular seasons in recent memory has come to a close.  It was a fun year, and there were a lot of surprises.  Conventional wisdom has Wisconsin and OSU going to the BCS, but with the way this season has unfolded, it wouldn't surprise me to see MSU slip in there somewhere and dislodge the Bucks or the Badgers.  I thought it was fitting that in the last year before expansion, we had three co-champions, because we'll never see it again.  And that's sad, in some ways, as it marks the end of a remarkable era of Big Ten football.

But as one door closes, another opens, as Nebraska and a Big Ten championship game await us in Indianapolis next year at this time, plus one week.

And I can't wait.  But for now, onto the Bowls!