Michigan 67, Illinois 65: What We Learned About Michigan

Share All sharing options for: Michigan 67, Illinois 65: What We Learned About Michigan

The emotional well-being of myself and 111,000 other people was put in peril thanks to the twists and turns of Saturday's Wolverine victory. But there were some lessons learned here that will definitely impact the remaining Big Ten games...

Denard Robinson, Gunner? When given the opportunity to run or throw, Denard Robinson chose to throw more than not. That's the first time we've seen this happen in 2010. This led to less shots to his body and less awkward leaps out of bounds. Of course he got smashed in the head and left the game anyways, but not before going 10-20 for 300+ yards.

Tate Forcier, Gunner. I went to a Michigan practice 1 week before the UConn game and asked a coach what the biggest difference between Michigan 2009 and Michigan 2010 was. "Depth at important positions," was the response. Some truth to this statement was shown Saturday after Forcier came in to save the day with a bunch of pinpoint throws and good scrambling. 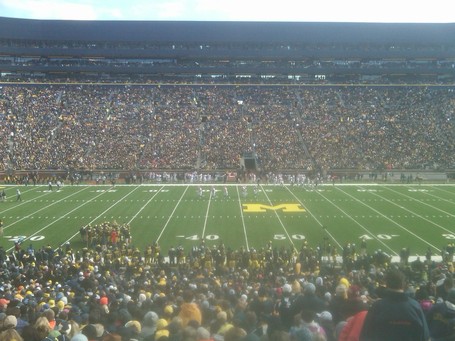 My view before the defenses were mercilessly annihilated.

Not Bubblelicious. Apparently Michigan has stopped bubble screening like a typical Rich Rodriguez team, relying on deeper vertical and sitdown routes. Denard and Tate were also rolled out constantly, which I support. Recently, Denard was getting in trouble just sitting back in the pocket and winging the ball intro traffic.

O god, the defense. A thought occurred to me when I was watching Illinois run for 400 yards: The defenders on the field aren't very good athletes. They don't run very fast or hit hard. No one is ever in position to intercept a pass (zero in the last four games).They just try to survive possessions.

Wheelroutes, Heyo! I'm admittedly embarrassed by Illinois scoring on the same play twice, the always difficult to guard "roll right, throw back to the RB on a wheelroute" play. Each time, the back was wide open by a good 20 yards. Misdirection is kryptonite to this Michigan defense. 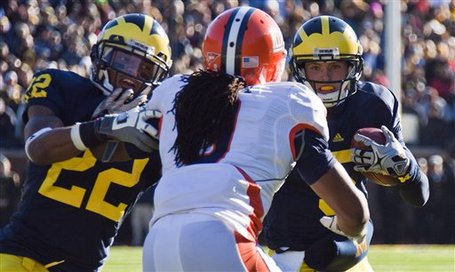 I'm a STAR! Until next week.

O God, The Offense! Toward the end of his tenure in Ann Arbor, some of the biggest complaints with Llloyd Carr's offense was that it was a) predictable and b) unable to adapt to defensive and/or situational changes. Coach Rodriguez won't be accused of that. Seeing the zone read middle dive stuffed early by Illinois' monster DT's, Rodriguez began running the zone read to the edges with much success. Much credit should also be given to the great offensive line, who kept Illini defenders out of the backfield all day.

Bowling. I assume this is now a 7 win Michigan team headed for the Insight.com Bowl unlesssssss Denard can get healthy and lead an upset over Wisky or OSU. Could it happen? Yeah. But boy those chances are low with this FCS conference-level defense.