Share All sharing options for: The BCS - If You're Not Outraged, You're Not Paying Attention 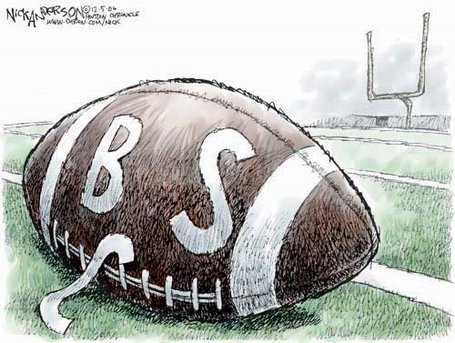 It's no secret that I'm about as fond of the BCS as I am lite beers, flavored cigars, and automatic transmissions.  Still, I've got to hand it to the system for finding a new way to frustrate me on a semi-annual basis.  This time around, it's the computers -- and their invidious Big Ten bias -- that have me perplexed.

It started a few weeks ago, when U.C. Irvine professor Hal S. Stern, an analytical mathematician, called for the statistical community to boycott the B.C.S. standings on the grounds that they're "nonsense math."  In its Keeping Score column the New York Times quoted Richard Billingsley -- whose rankings make up 1/6th of the BCS computer forumla -- as saying "I'm not a mathematician."  Two other analysts, Jeff Sagarin and Kenneth Massey, acknowledged that their rankings for the B.C.S. could be more accurate if they were allowed to take margin of victory into account.  (The BCS administration banned that measure several years ago fearing teams would try to run up the score, meaning as far as the computers are concerned Iowa's 18-13 victory over Indiana is just as good as Ohio State's 38-10 rout of the Hoosiers).

The formulas are kept secret, so there's no peer review.  Bill James, the godfather of modern sports statistics says it best: "This isn’t a sincere effort to use math to find the answer at all. It’s clearly an effort to use math as a cover for whatever you want to do..."

What exactly are the analysts trying to do?  I'll leave that article to someone else since I'm not a big fan of conspiracy theories.  My beef is with the fact that the Big Ten has little to no chance of putting one of its three one-loss teams into the title game, while the SEC, Big 12, and Pac 10 do.  Want to see how bad it really is?  Take a look at this projection of the final BCS championship pecking order by our in house rankings experts at BCS Evolution.

Read it again.  Notice anyone missing?  Here's a hint: Hilary Lee does.  That's right.  According to BCS Evolution if Wisconsin beats Indiana and Northwestern to finish 11-1 on the season and gain at least a share of the Big Ten Championship, they'll be behind no less than seven other teams with identical records.  One of the seven teams projected to jump Wisconsin is Ohio State, a team the Badgers beat by double-digits.

But even lofty Ohio State will need more than a miracle to get to Glendale.  According to this model that would include Auburn and Oregon each losing twice, TCU and Boise State losing once, and LSU, Nebraska, and Stanford each losing a second time. 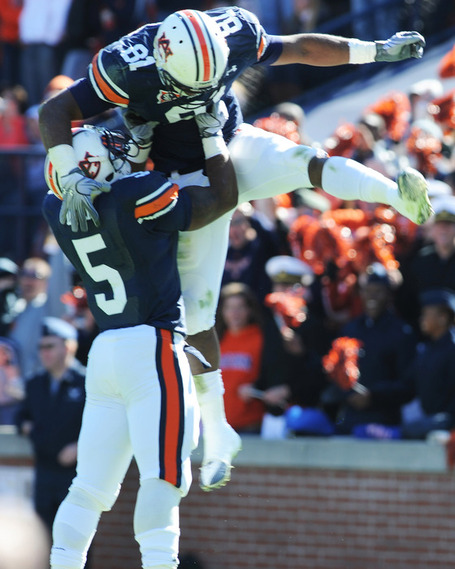 Auburn and Oregon have to lose twice before a Big Ten team can get to Glendale.  Bullshit.

What ever happened to the age old maxim that if you're going to lose, lose early?  Apparently the laws of nature don't apply to Auburn and Oregon who could each lose once in November and still end up ahead of three Big Ten teams that lost in October.

And as much as I hate to rag on one of our soon to be own, what's up with ranking a one-loss Nebraska ahead of a one-loss Ohio State, Wisconsin, and Michigan State?  Last I checked, the three current Big Ten schools all lost to Top 15 competition while Nebraska was embarrassed by a Longhorn team that will be lucky to get 6 wins.

Now, now.  I know what you're thinking.  This is why a conference championship game is so important.  As Doug Lesmerises explains, "For teams that lost and that are trying to differentiate themselves, conference title games are a chance at redemption, or, at the very least, one more chance to show off. This season, with three Big Ten one-loss teams in various levels of the national title discussion, the conference could really use one more chance to get a member a big win. No Big Ten title game until 2011? Not so good for Wisconsin, Ohio State and Michigan State this year. Because right now, Wisconsin and Ohio State are on the outside looking in."

I agree that beating a ranked team in an NFL stadium the day before Selection Sunday with it all on the line is a huge boon for conference champions.  But let me ask you this.  If Auburn loses to Alabama in the Iron Bowl, but gets to Atlanta on the strength of its head-to-head win over LSU, are you really that impressed when they beat a three loss South Carolina team a second time?  How about a three-loss Florida squad that needed overtime to beat Georgia?  Are either of those victories really any better than beating Michigan, Northwestern, or Penn State on the final week of the season like Ohio State, Wisconsin, and Michigan State will? 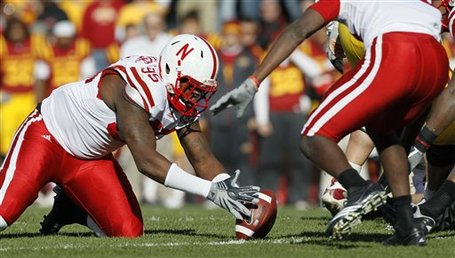 Nebraska will stay ranked ahead of three Big Ten teams that lost to Top 15 opponents even though it lost to an unranked team and plays in a less competitive conference.  Bullshit.

Same goes for Nebraska when they beat a two-loss Oklahoma team in Cowboy Stadium, or smash Oklahoma State a second time.

And Oregon...wait, that's right.  The Pac 10 doesn't even have a conference championship game.  So it's a mystery why a Ducks loss to unranked Cal, No. 18 Arizona, or unranked Oregon State in November or December still won't drop them behind three one-loss Big Ten teams that lost to Top 15 clubs in October.

I know.  It's about the overall strength of schedule.  The quality of opponents a team faces week-in and week-out.

You want quality?  How about playing in the second-best conference in the country?  That's where ESPN just ranked the Big Ten in the BCS hierarchy.

Want to see all these one loss teams duke it out on the field?  Me too.