Okay, it's kind of a lull between the end of the regular season and the beginning of the bowl season, so I thought it might be nice to muse about the head coaching situations in the Empire.  Of course, this time next year, I won't care if 9 of the 11 programs are leaderless because I will be preparing for the inaugural Big Ten conference championship game, but I digress.  Let's look at the two openings, and then discuss who might be headed for the unemployment line.

Minnesota:  Personally, I have no faith that Gophers athletic director Joel Maturi could hire a good coach, even if the Lord sent down the Good Coach Angel to pick it for him, but he did hire Tubby Smith, so there is a slim chance that he won't screw this up.  You can't swing a dead cat without hitting a guy named as a possible successor to Tim Brewster, from SEC retread Phil Fulmer, to Northern Illinois' Jerry Kill, Temple's Al Golden, Larry Fedora of Southern Miss., San Diego State's Brady Hoke, Wisconsin Offensive Coordinator Paul Chryst, UConn's Randy Edsall, Mississippi State's Dan Mullen, and Air Force's Troy Calhoun.  According to other reports, Golden, Calhoun, Hoke, Edsall, and Mullen have all turned down Maturi, and Minnesota is about ready to panic.  Yawn.  Just like Jon Gruden said he wasn't going to be the Miami coach, right before he gets hired, and just like Nick Saban wasn't going to be the Alabama coach...until he was.  I'm sure there is a lot of plausible deniability going on at the U of M right now.  Obviously, there's a lot of smoke and chatter about who is going to be the next Gophers coach.  Although I really, really wanted Mike Leach to be hired right after the Gophers lost to Iowa State...Iowa State!!... in their meaningless, non-descript the Insight Bowl last season, it looks like the Pirate is shilling for the Miami gig.  Now could the next Gophers coach be one of these 50 guys listed?  Sure.  Could it be someone from left field that no one has mentioned yet?  Of course it could be, we're talking Joel Maturi and Minnesota here.  So if you look at all these guys, the ones, to me, that would be the most intriguing, are as follows: 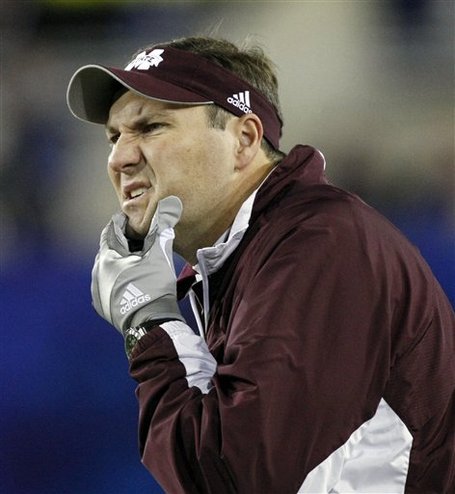 Minnesota?  No, no I don't think I could point it out on a map.

Dan Mullen-The guy that was Urban Meyer's QB coach and offensive coordinator at Utah and Florida has taken a moribund Mississippi State team and made them competitive in the SEC West in two years.  Paul Finebaum, the Alabama version of respected columnist and scribe, calls Mullen ‘the future of college football'.  If you know anything about Finebaum, he's 90% cynical and pessimistic on every subject, ever (how he became a respected writer is beyone me).  So when he writes something that glowing and positive about anyone or anything, he's either genuinely impressed, or he's been paid off.  I mean, it IS SEC country, after all.  This would actually be beyond home run for the Gophers, in my opinion.  It would be the equivalent of Artie from Glee hooking up with Gwyneth Paltrow, the hot substitute from a few episodes back. 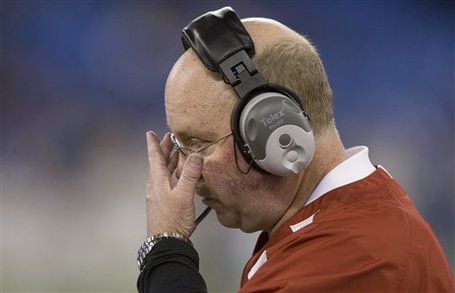 I lost a game to Tim Brewster?  Oy.

Jerry Kill--  Kill would be another great fit for the Gophers, in my opinion.  (From what little I've seen on the Indiana coaching search, I've seen his name pop up there as well depending on the unreliable source of the moment you're reading, so let's consider this a summary for both teams).  Kill's record at turning around terrible programs is pretty damn impressive.  His first year at either an FCS or FBS school was Southern Illinois in 2001, where he started out 1-10.  The second season he was 4-8, and then either won or tied for first in the Gateway Football conference three straight years, going 10-2, 10-2, and 9-4.  He also took the Salukis to the FCS playoffs  from 2003-2007.  From Southern Illinois, he went up the road to Northern Illinois, who went 2-10 in 2007.  In Kill's first season of 2008, he went 6-7 and got Northern Illinois to the first of two consecutive bowls.  This season Kill has guided UNI to a 10-2 record and a berth in the MAC Championship game. 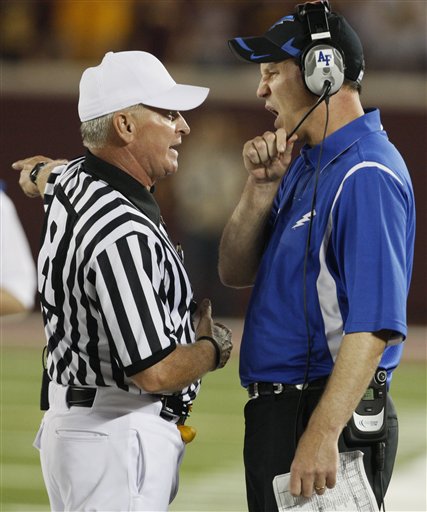 Coach, you lost to Tim Brewster.  BULLSHIT IF I DID!

Troy Calhoun-Being a military vet, and a retired Air Force guy in particular (who also did 10 years in the Army), I really admire the quality of football produced by the service academies year in and year out.  They take great young men, teach them how to play solid, fundamental football, and the results are usually pretty impressive.  Former Navy coach Paul Johnson took Georgia Tech to a BCS bowl in his second season there after a very successful run at Annapolis, and I would love to see what Troy Calhoun's triple option offense would do in the Big Ten.  The option, when it is run well, is a great equalizer much in the same way the Spread Option is, and I think it could find success at the Big Ten level.

Indiana:  I can understand the Tim Brewster firing, but I'm not sure I understand the Bill Lynch firing.  Brewster was...Brewster, and his underwhelming record, along with an inability to beat a quality opponent or win a rivalry game is well documented.  But Lynch?  On one hand, the outsider to Indiana football would say in a typical kneejerk reaction style:  "hey, you guys went 5-7, beat Purdue, and were in a bowl just a couple of seasons ago.  One play or bounce, or catch, and you're in a bowl this season (thanks Damarlo!).  But Indiana is sick and tired of being a doormat, and backers of the program feel that this team was too talented to not go to a bowl, and to only go 6-26 in the Big Ten over his tenure.  Indiana feels that they should be able to be more competitive in the Big Ten, and they have a point.  You could make the argument that with the talent they had on offense (Ben Chappell, Damarlo Belcher, Tandon Doss) they should have at least gotten to 7 wins.  So, who are their candidates?  According to Adam Rittenberg over at the ESPN Big Ten blog, Indiana has a preliminary list of Glen Mason (seriously?), Hoke, University of Houston coach Kevin Sumlin, MSU OC Don Tredwell, and Chryst.  And I have to be honest,  I'm sure that Rittenberg is just throwing names on the wall to get the conversation going, but he's the only one.  I haven't really seen a no- kidding list of guys on IU's short list.  In some ways, that's probably better than the Kabuki Theater we see going on in Minneapolis right now. 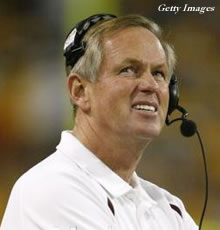 I was replaced by Tim Brewster?

Glen Mason-Mase, really?  Here's my thing with Mason.  He's excellent at taking bad programs and bringing them to a level of success they hadn't had before.  But he has a ceiling, because Mase thinks that unless he's at OSU or Michigan, he can't get top recruits, and that fans of that program should be happy with 7 wins and a mid-tier bowl.  Hey, it's cool the first couple of years, but it's natural to want to take the program to the next level.  Or at least try.  I think Mason would get Indiana to some mid-level bowls, which granted, they aren't even doing that consistently, but if Indiana wants to go farther than that, Mason isn't the guy. 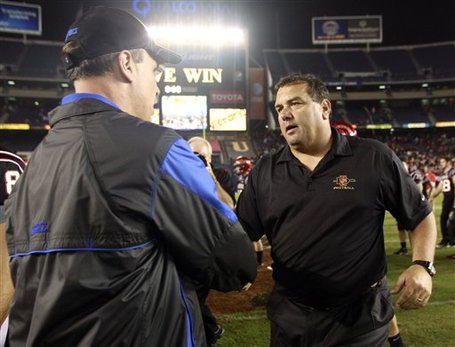 Brady Hoke-Hoke is a name that is a ‘hot name', but frankly, I'm not sure why.  He had some success at Ball State, going 12-1 in 2008, but his overall record there was 34-38.  At San Diego State, he's gon3 4-8 in his first year, and 8-4 this season.  So he's still 4 games under .500.  I'm not saying Hoke is a bad coach, because at a Big Ten school he might have more resources, a better recruiting base, and a more attractive destination, but there's something that just doesn't fit with Hoke.  And this goes for this job or the Minnesota job, for which he has also been mentioned.

Paul Chryst-How can you not notice what Wisconsin has done on offense this year?  Would Chryst have that kind of success right off the bat?  Well, Indiana has talent on offense, and he has a reputation as an offensive guru.  He has no head coaching experience, and is a native of Madison and played at UW.  Chryst has said he's happy where he is, but would also like to be a head coach one day.  Would IU be enough of a draw to leave his hometown and a program really starting to hit its stride?

Rich Rodriguez-Well, we have to talk about it eventually, so why not start now?  There are two schools of thought on RRod right now, and if you're a UM fan, I'm not sure that any of them are good options.  The first one is that he deserves one more year because he has improved every year that he's been in Ann Arbor.  Yes, that's true, but if 7-5, with losses to MSU and OSU and the worst defense in program history is progress, then Michigan is officially a mid-level program.  I was willing to give UM the benefit of the doubt that they would return to prominence as a traditional power, but after this season I just can't.  Yes, Denard Robinson is a playmaker, and RRod's offense has been very successful, but it struggles against defenses that are just as fast and just as athletic, as his anemic 1-13 record against the top 5 teams in the Big Ten attests.  That's not Michigan, that's Indiana or Minnesota.  Rodriguez has had success wherever he's gone, and if he can get rid of defensive coordinator Greg Robinson and bring in someone who knows how to coach defense, it might all come together.  Buuuuuut...if it isn't pan out, now Michigan is one more year with small, fast guys that can't stay healthy, and a new coach has to come in with even less talent to compete in the Big Ten than Michigan has right now.

So, where does Minnesota go?  Indiana?

And what happens to Rich Rodriguez?