Leaders and Legends - The Big Ten Just Made a Big Mistake

Share All sharing options for: Leaders and Legends - The Big Ten Just Made a Big Mistake 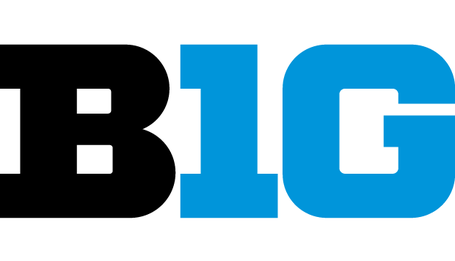 As one of my favorite law professors used to say: keep it simple stupid. Apparently the Big Ten missed the memo.

After overseeing a brilliant twelve month campaign that saw the Big Ten expand from eleven to twelve teams, divide into divisions, and schedule a much overdue championship game, Commissioner Jim Delaney ended his administrative onslaught with a thud.

At least that's how I view the league's new brand identity that was unveiled yesterday afternoon on the Big Ten Network.

My first look at the new logo was a low-resolution glance on a smartphone. Graham and I happened to be having lunch in Baltimore and we passed the phone back and forth exchanging bewildered looks. The thing that first struck me was the color change -- from royal to deep sky blue. As any reader of the site knows, I'm not a fan of inserting color for color's sake into a mark, and Pentagram Design's adaption felt a bit too whimsical for major college football's oldest brand.

Similarly, I had a hard time adjusting to the new logo's shape. The tiered, soft-rounded characters had an almost cartoonish quality. We just became Twitter, I thought to myself.

Still, I have to admit that after a few hours, the new logo is growing on me. I like the variations the conference unveiled -- particularly the B10 shorthand.

In the end I'll take the Big Ten's retro reimagination over the Pac-12's Voltron Shield, although I would have gone with a simple black and white design. Ultimately, I think Delaney is right that "marks grow and take on meaning, based on memories and emotions over time," so I'm willing to give the new logo a chance.

Not so much on division names. Legends and Leaders is bad. ACC Atlantic and Coastal bad. Actually, worse. Commentators have expressed a number of reasons the conference "overthought" its assignment. None are as damning as the fact that the new division names are indecipherable to the casual fan.

My Mom doesn't know the Big 12 Divisions from Adam, but if you ask her which one (North or South) Baylor is in, she'll guess correctly based on geographic intuition. Not only are Legends and Leaders abstract, they're phonically similar, making them impossible to untangle.

I can picture this statement being uttered at bars across the country next year: "Wait, are they in the Legends or Leaders division?"

It was a year of energizing administrative moments, but alas, the other shoe has dropped. Although the corpus of Big Ten expansion is still strong, its face is lame.