Share All sharing options for: Your Texas Bowl Primer

On December 29th, the one of the few bowls that doesn't play in Jerry's World pits the Fighting Zookers against the Baylor Bears in the Texas Bowl.  There's a lot of similarities to be found between the two teams.  Historically, Illinois has a better program, as Baylor has been synonomous for 'terrible' for the better part of my entire life, which spans more than 40 years of medicority...much like Baylor.  To be fair, Illinois has had their struggles, but went to the Rose Bowl in 2007, and has a modicum of success under Ron Zook.

No one really looked at Baylor and Illinois as bowl teams when the season began; Baylor continually struggles to get more than four wins, and last year for Illinois, the bottom fell out.  It was widely believed that if Zook didn't produce this season, he'd be fired, and Illinois was impressive early on.  For Baylor, they not only are going to a bowl, but they beat Texas, which happens about as often as a total solar eclipse.  The Bears have the best QB you've probably never heard of, so follow along after the jump to see how the Texas Bowl is going to go down. 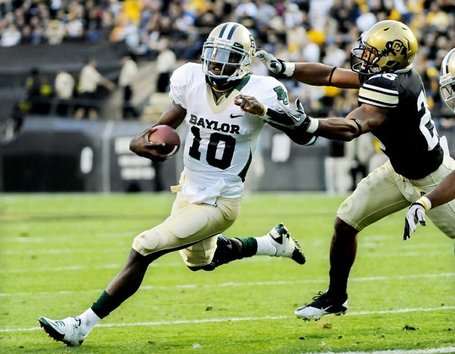 Robert Griffin III is the playmaker for the Baylor Bears

I'll be honest, I know as much about Baylor as I do about brain surgery, but the more I read about them, the one name that you can't get away from is quarterback Robert Griffin III.  Griffin has put up spectacular numbers, and bounced back from an early 2009 season ending knee injury (ACL tear) to lead the Bears to the post season for the first time since 1994.  Griffin is the catalyst for this offense, passing for over 3,000 yards and rushing for almost another 600.  Oh, and he's only a sophomore.

On October 30th, Baylor beat Texas for the first time since 1997 and were 7-2, with a #21 ranking in the polls.  However, Baylor's defense was shredded the last three games, and Baylor finished out at 7-5, getting blown out in all three games.

But Griffin isn't the only weapon on Baylor's offense.  They are a very balanced team, and are in the top 25 nationally in both rushing and passing the ball.  The main threat on the ground is senior Jay Finley, who ran for over 1,100 yards and a 6.3 YPC average.

But Baylor's defense hasn't held up to their end of the bargain.  They were good enough early, but absolutely collapsed at the end of the season, giving up 55, 42, and 53 points to close out the season.  In their other two losses, they gave up 45 points twice, to TCU and Texas Tech.  The defense never seemed to recover after the Texas Tech loss, though.  Although Baylor went on a three game winning streak to get to 7-2, their defense made the offense work, giving up 25 to Colorado, 42 to Kansas State, and 22 to the most anemic Texas offense in my life.

The end of season collapse that Baylor had is similar to the end of the Illini season.  They lost 3 of 4, and what we thought was a very good defense was exposed in a big way.  They gave up 67 in an epic triple overtime loss to Michigan, 38 to Minnesota, 27 in a win against a Dan Persa-less Northwestern offense, and 25 in a disappointing loss to Fresno State.  It was nothing like the defense that we saw largely hold good to high powered offenses like Missouri, Ohio State, Penn State and Indiana in check.

Still, they have a good offense, and a very promising quarterback in Nathan Scheelhaase.  RB Mikel Leshoure is a powerful runner (1,500 yards and a 6.0 YPC avg), and if he can get started early, Illinois should be able to control the clock and keep the explosive Baylor offense off the field.  I expect Illinois to try and grind it out on offense, pounding the ball against a Baylor defense they should be able to dominate.

Both quarterbacks are very good at the zone-read option, and if this game turns into a shoot out the edge here goes to Griffin of Baylor, and then the question will be can whether or not the Illini defense can stop him just enough to get Illinois the win.  I like the Illini defense better than the Baylor defense, but their end of the season mini-collapse worries me.  But then I look at the abject disaster Baylor's defense was at the end of the year, and I talk myself into Illinois.

Either way, I think this will be one of the more entertaining games of the bowl season, and could also be a national coming out party for both Griffin and Scheelhaase.