Share All sharing options for: Week 14 in the Non-Con: What I Want 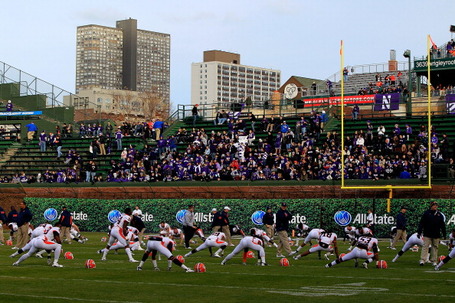 Wrigley Field...where the visiting team wins more often than not.

When last we saw the Illini, they were treating Northwestern the way that most visitors have treated the Wrigley Field home team throughout the years - with a thorough beating. When the Big Ten last saw Fresno State, it was upsetting Illinois with one of the most silly game-ending plays you'll ever watch.

This year, Illinois is off to bowl game, and their performance could send them as high as the Gator Bowl (for a matchup with the Zooker's former employer) or as low as the Ticket City Bowl (against the last selection from the Big Twelve). I want to see Illinois play with fire and passion. I want to see them overpower and outmatch a smaller, slower Bulldog squad. I want a win.

We've done better than we had the past couple of years. The Big Ten is 35-8 (.814) out of conference. The league has clinched a better non-conference record than it had last season. The league is 7-5 against BCS Conference teams (plus Notre Dame). It has secured a winning record against BCS opponents. The league has three losses (Northern Illinois, Toledo and South Dakota) to non-BCS teams, one more than last year.