2010: The Year of The Incredibly Effective Big Ten Quarterback

Share All sharing options for: 2010: The Year of The Incredibly Effective Big Ten Quarterback 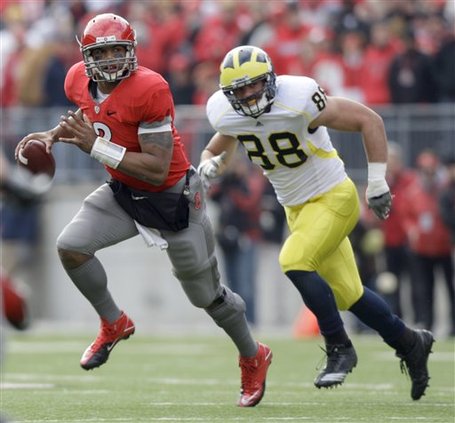 A couple stats below to chew on:

This was the most efficient group of Big Ten QB's ever

And lest you think it's all just gunslingers out there, the Big Ten featured five QB's that rushed for 500 yards or more. Their numbers are below: 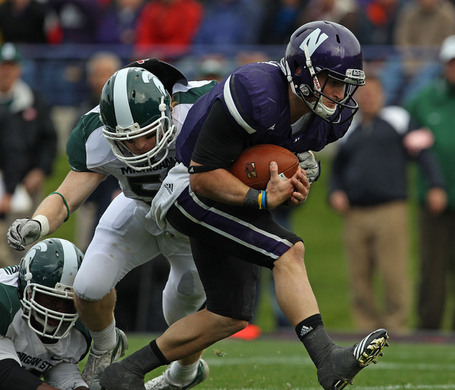 Tolzien, Pryor, Stanzi, Weber, Chappell, Cousins...Each had a good number of quality starts under his belt. Each had experience with their specific offensive system. At the beginning of the season, we expected each of these quarterbacks to solidify their team's leadership role and perform well statistically. Save for Weber's sideline antics, each lived up to expectations (...and Weber is a special case because his entire team spent the season flopping around lifelessly. It's a wonder he recorded decent statistics...)

I wrote about the unbelievable speed at the QB position back in October, And while it's true that the athleticism at the signalcaller position is off the charts, there's another reality here that a couple Big Ten coaching staffs did excellent things with their quarterbacks in 2010. Take Purdue for example. Done in by injuries at QB, Danny Hope switched to a Read Option with Rob Henry that helped defeat both Minnesota and NW. Ron Zook, seemingly tired of asking his athletic quarterbacks to throw difficult out-routes and slants, simplified his offense and asked Scheelhaase to a) make good zone-read decisions and b) complete simple crossing routes. Scheelhaase complied and the Illini are shockingly bowl eligible. The Penn State coaching staff did a similar thing with Matt McGloin, simplifying the offense and letting him get in a groove with short passes and rollouts that lessened his reads.

You may want to be a hater and point out that most of these quarterbacks won't play in the NFL. You're probably right; Stanzi and Cousins are probably the only QB's of the group with the size and talent to play quarterback at the next level. You might also rightfully point out that featuring athletic quarterbacks hasn't exactly helped on the injury front. Again, you would be right: Persa (done), Robinson (knocked out of four games), Henry (lacerated hand injury, missed two games).

But you'll also be forced to admit that 2010 was one great year for Big Ten offenses. And those offenses don't get rolling without effective quarterback play, which was available in spades.