Jon and I have been discussing the weak slate of bowl games in 2011. Really - Which games get you out of your seat and excited? Even some of the BCS games are snoozefests. So why should you be watching the Gator Bowl?

Reason number one is of course Denard Robinson. Remember the good ol' days of early 2010 when Denard used to shake and cut through everyone, all the while whipping 15 yard bullets to open WR's cutting through seams in the defense? Those days were somewhat wiped out by injuries and killer defenses toward the end of the season, but warm weather and a month off can be instant remedies (I hear he's as healthy as he was in September).

Back in 1990-something, there was a rapper from New York. You may call him BIG, Biggie Smalls, Notorious...I just call the him the best rapper ever. His anthem Juicy has recently been parodied by Dave from Maize and Brew, to discuss Jim Delaney's dominant personality. Here's my favorite line below and TELL ME THAT'S NOT GENIUS:

Stereotypes of division names misunderstood
And it's still all good 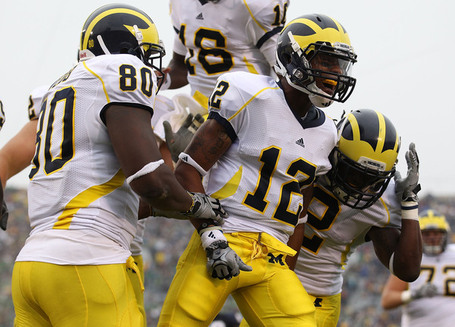 Reason number two has to do with the coaching subplots involved in this game.  Do you despise Coach Rodriguez and want to see him go down in flames at all costs? MSU probably has a good enough run game to accomplish that. Are you a Michigan homer who supports Coach Rodriguez and wants them to win so he will stick around...or a Buckeye home who likes beating Rich and wants him to stick around? ESPN will have a camera honed in on RichRod, you can believe that. Are you a Big Ten guy who would love to disprove all the SEC Team Speed Kills talk? Denard may help kill that notion with his legs and arm.

Reason number three has to do with the matchup itself. No one seems to have any idea how this game will turn out. Although MSU is favored, our OTE commentators and fans picked the game almost 50/50. We keep waiting, waiting to see this supposedly lightning in a bottle Michigan offense beat up a good defensive squad. It still hasn't happened, but God knows the potential is right there. Denard could blow up, Roy Roundtree could continue his big playmaking...or the Wolverine defense could continue in its attempt to be the worst D in Michigan history. The safety, walk-on Jordan Kovacs, led the Big Ten in tackles and it's not because he's an amazing safety. It's because the defensive scheme and front seven got beat so much that Kovacs had to make the play time after time.