Share All sharing options for: 2010 Sugar Bowl - Buckeyes Aim to Run, Run as Fast as They Can 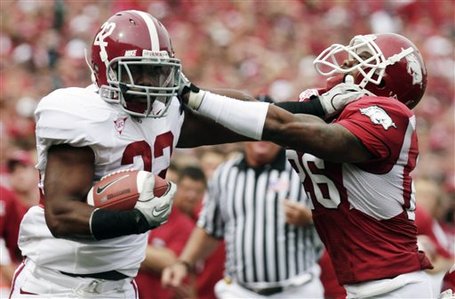 You've heard the meme.  The 2010 edition of the Sugar Bowl is all about strength versus strength.  Fire versus ice.  Just like this year's Rose Bowl -- and last year's Rose Bowl for that matter -- when Ohio State and Arkansas take the field on January 4th the nation will wait to see whether the Razorback's potent passing offense (3rd nationally) or Buckeyes' denaturing defense (2nd nationally) is the last man standing.

But what if the answer actually lies on the other side of the ball, where a laconic scarlet attack lines up against an overlooked Razorback defense?  Buckeye fans are bullish about the team's ability to run all over Willy Robinson's 68th ranked rushing defense -- which measures in the bottom half of rushing defenses the Bucks faced in the Big Ten.  Arkansas apologists are quick to counter that the Hogs faced a more demanding slate of rushing attacks in SEC play, hence they gave up more yards.

But that's not entirely true.

So, there's not a ton of evidence (on paper at least) that Arkansas' defense played tougher rushing offenses than Ohio State's opponents.  That means, with the exception of Marshall, it's fair to assume that Ohio State saw four defenses that were at least as good (and probably better) at stopping the run than Arkansas is.

In other words, there's nothing in the numbers that suggests Jim Tressel will deviate from his bread and butter offensive gameplan.  But what about the individual matchups themselves?

The games that standout when you look at Arkansas on film are their losses to Alabama and Auburn, where the Razorbacks allowed a whopping 278 yards on average on the ground.  Compare that to the 157 yards they average over the season and you see why Ohio State will likely try to follow the Crimson Tide/Tiger blueprint.

But can they execute like Alabama and Auburn?  Yes and no. 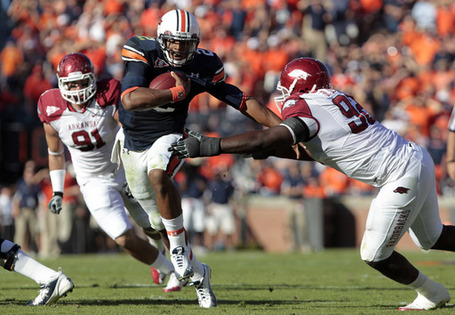 On one hand, no one will confuse Daniel "Boom" Herron and Brandon Saine with Mark Ingram and Trent Richardson.  Both Alabama backs are bigger (5' 10'' and 215 lbs, and 5' 11' and 220 lbs versus 5' 10'' and 202 lbs, and 6' 1'' and 219 lbs) and more physical than their Ohio State counterparts.  That being said, both Saine and Herron are dangerous on the edge, where Arkansas has struggled to clean up plays.

The same goes for Terrelle Pryor and Cam Newton, although here the comparison is slightly-more flattering for the Buckeyes.  On October 16th, Newton exploded on the ground against Arkansas, gaining 188 yards on 25 carries -- including a 40 yard long -- for three touchdowns.  The Razorbacks struggled to contain the 6' 6'' 250 pound monster.  At 6' 6'' and 233 pounds, Pryor is a similar athletic specimen, with a nose for the sidelines.

And that's not even the best news for Ohio State fans.  In their breakout game against Arkansas, Auburn didn't have to pass to set up the run.  17 of the Tiger's first 24 plays from scrimmage were on the ground.  In other words, the Tigers ran to run, and they had little trouble moving the chains even when Arkansas knew what was coming.  So if you expect the Buckeyes to come out slinging it like they did in last year's Rose Bowl Game versus Oregon, think again.

But don't throw the confetti in the air.  After all, we're just looking at one side of the Sugar Bowl matchup.  On the other, Arkansas' 3rd ranked passing attack threatens to expose a thin Ohio State secondary.  If Ryan Mallett and the Hogs jump out to an early lead, Ohio State's ground gameplan will go by the wayside.  After all, this isn't an offense built to come back.

More on the Sugar Bowl next week.