Things to do for a Michigan fan on January 1st:

At last. At long last. Salvation! I can still remember the message boards three years ago saying: "I just hope Rich Rodriguez can keep our unprecedented bowl streak alive." Well, we all know how that went. Now after a two year drought, Michigan fans everywhere now no longer take a New Years Day bowl game thrashing by USC for granted. I know I won't.

As the dust settles on this 2010 season, the fans are beginning to see what is taking shape at Michigan. At 7-5, Rich Rodriguez finished the season right where the majority of our staff at OTE predicted; not outstanding, but not terrible. When all is said and done, 3rd year head coach Rich Rodriguez started 9 freshmen on defense, put together an offense that finished 6th in the nation in total offense, and 3 of the 5 losses were to teams that finished in the top 10 nationally.

But as Denard Robinson is racking up award after award as only a sophomore--Big Ten offensive player of the year (by both the coaches and the media), breaking not one but two NCAA records, the Tribune’s Silver Football award as the Big Ten’s MVP (as voted on by the conference coaches), finished 6th in the Heisman voting, etc—the magnitude of what this football team accomplished offensively this season is becoming clear, and what this young team is capable of down the road is becoming very exciting. 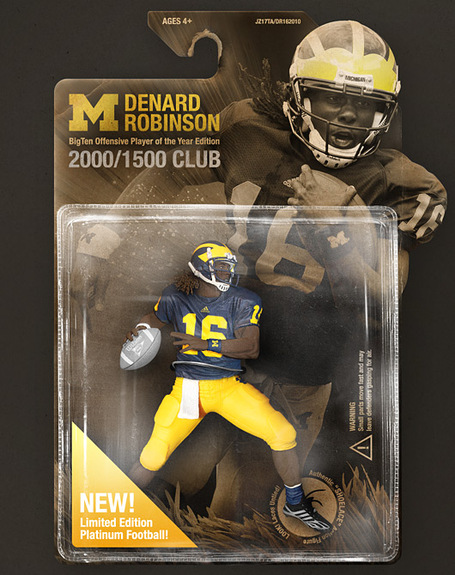 Available for a limited time only?

In addition to a prolific offense, this season produced another enormous milestone for this Michigan program under Rich Rodriguez: the Wolverines finally qualified for a bowl game. As only current seniors on this team have been to a bowl game prior (besting a Tebow-led Florida in the 2008 Citrus Bowl), this is a tremendous achievement for the players and the coaches.

However, the remarkable offensive achievement this season is marred by a staggering regression of both defense and special teams. In terms of creating a successful football TEAM over his three years at the helm, Rich Rod has only done 1/3 of the job.

It’s like dating a fabulous-looking girl with whom you have incredible sex, but she’s a raging alcoholic with borderline personality disorder. Law of averages? C’mon!

In a season marked by the extremes of success and failure, milestones and records (both for offensive achievement and defensive horrendousness), the question on everybody’s mind is: will Rich Rodriguez be retained?

Second year athletic director Dave Brandon, of Domino’s fame (now with more herbs and spices!), has continually stated that he will wait until after the conclusion of the season, including the Jan 1st Gator Bowl, to evaluate RR’s performance and future as head coach. Thus, the elation of the Wolverines’ first bowl qualifying season under Rich Rod is overshadowed (and, some may say, tainted) by the uncertainty surrounding the future of the program.

It does seem kind of odd, right?

If Brandon does end up retaining Rodriguez, his timeline presents several issues. For one, it makes recruiting rather difficult for Rodriguez: Rod not being able to state with absolute certainty that he will be the head coach next season isn’t exactly a vote of confidence to recruits with the Feb 2nd LOI date approaching only a month after the bowl game. Though Rod has managed to retain most of his committed prospects (including Rivals' #1 all purpose back Dee Hart), the reverberations are most strongly felt in uncommitted players considering Michigan. Furthermore, if Dave Brandon does wish to retain RR but replace the defensive staff, it’s not exactly the pick of the litter as the best defensive coordinators and defensive staff in the country are being snatched up before the bowl games.

However, by delaying his decision until after the Gator Bowl, Brandon is making it clear that the most important event for this Michigan program at this point in time is their bowl game, not who their head coach will be. The players have earned it, the coaches have earned it, and they have a right to enjoy the experience and prepare for it. This is the most fair thing Brandon could have done for the players and coaches, while still allowing him to do his job. 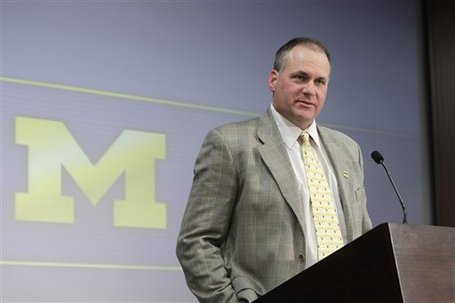 But the question still remains: doesn’t Dave Brandon already have enough criteria? Does the outcome of this bowl game really matter?

After all, a bowl game isn’t just another game; it's the big show. Up against a Mississippi State team that held Cam Newton to 17 points and finished 2nd in the SEC in rushing, Rich Rod has a chance to test his mettle against a stalwart team from the best conference in the country. Talk about an opportunity!

By no means is this a must-win for RR, but it will certainly do wonders enhance a resume that right now does not contain a single win against a conference team that finished with a winning record. And if the Wolverines win and win big, it will be pretty tough for Brandon to fire Rodriguez after the biggest win of Rod’s career.

So be not mistaken, OTE Nation, there is a lot at stake here for Rich Rodriguez’s Wolverines. Uncertainty or not, these Wolverines will come out firing on all cylinders, which should make for a very entertaining game.