2011 Ticket City Bowl - Where Have We Heard This Before?

Share All sharing options for: 2011 Ticket City Bowl - Where Have We Heard This Before? 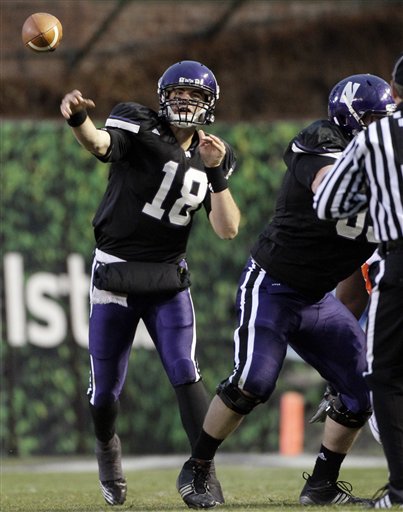 The Big Ten is no stranger to being an underdog in bowl games.  But Northwestern is setting a new record for lack of faith in the buildup to its January 1st date with Texas Tech in the TicketCity Bowl.  It's not that the Wildcats can't get respect, it's that they're playing without star quarterback Dan Persa.  How big of a difference does Persa make?  With him, Northwestern averages 410 yards a game on offense.  Without him, they've posted back to back season lows of 318 and 284 yards respectively.  That's a difference between 34th and 74th nationally.

Pat Fitzgerald's defense has similarly self-destructed.  The same unit that allowed an average of 380 yards in its first 10 games was exposed for 559 yards in each of its final two showings, leading to questions about cohesiveness.

The bottom line -- if you're keeping score at home -- is that Northwestern is headless on one side of the ball and heartless on the other.  It's no surprise that a team that stormed out to a 5-0 start went 2-5 down the stretch.

The opposite is true for Texas Tech, which lost 4 of its first 8 games and won 3 of its final 4, including a defeat of No. 14 Missouri.  The Red Raiders' offense is 18th nationally, averaging 452 yards per game.

With that kind of firepower, it's no surprise that Vegas made them 11.5 point favorites, and we tagged the bowl as the most unlikely for a Big Ten victory.

Is this starting to sound familiar?

We said the exact same thing last year about Michigan State's Alamo Bowl matchup with Texas Tech.  In the week's leading up to the game Mark Dantonio suspended eight players including receivers Mark Dell and B.J. Cunningham, and defensive back Chris L. Rucker.  No one was confident that a depleted offense and shaky defense could contain the Red Air-Raiders.

To be sure, they didn't.  But the Spartans played admirably -- taking a 28-27 lead into the fourth quarter.  Considering Northwestern's tendency to play up to the level of their competition in bowl games, I wouldn't count Pat Fitzgerald out of this one.

To compete Northwestern needs a season-best performance out of its defense, which ranks 85th nationally against the pass.  Texas Tech boasts the 8th best passing offense in the nation.  They'll also need to hope that backup quarterback Evan Watkins has made tremendous strides in bowl practices.

The deck is certainly stacked against the Wildcats, but that hasn't prevented them from delivering some of the most entertaining post-season performances in the last two seasons.  Will they finally finish the job this time around?