Share All sharing options for: 2011 TicketCity Bowl: Revenge Is a Dish Best Served Hot and Wet 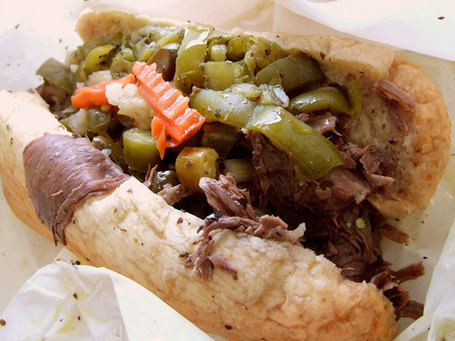 Hello OTE readers. It's finally that time of year. The time for revenge. The time when I set out to claim the food prize that I was so painfully denied after Northwestern shit the bed in the third overtime of last year's Outback Bowl.

As we wrap up another year on this site with our bowl festivities, it's time for another edition of my Northwestern bowl game wagering. Now, some of you, who've been around long enough to know this site when we existed under a different name might remember how this all works from last season. Those of you who are new to this site though, (welcome, but, seriously, think of all the awesome stuff you missed in the last year... why didn't you start reading sooner?) will need a bit of a primer.

As the site's masthead says, I'm currently a law student at Northwestern. I'm also originally from the city of Chicago. We Chicagoans love our food - just about as much as we love our sports. Our soon to be former Mayor, Richard Daley, has had a tradition for as long as I can remember of betting food on the performance of Chicago teams in the post-season for their various sports. Basically, he'll call up the mayor of whatever city Chicago happens to draw in the post-season and suggest a friendly wager: loser buys the winner food. Not just any food, but food that best represents your city or region. And piles of it. That way, you can savor your victory over a meal.

I've always enjoyed this tradition, and, loving food and sports myself, last year I decided to bring it to the blogging world. I managed to catch up with one of the bloggers over at the Auburn Tigers website, Track ‘Em Tigers, Jay Coulter. He and I made a wager last year over the outcome of the game between Northwestern and Auburn. I put up a package of hot dogs with all the fixins from Portillos, while he put Alabama style BBQ on the line. Unfortunately, the Wildcats let me down again last year after a thrilling three overtime game. I sent Jay those tasty hot dogs, but had no BBQ to enjoy...

So you might imagine, then, that I would be quite happy that Northwestern not only made it to a bowl game, but managed to draw a team from Texas as their opponent. Why? Well, it's a second crack at authentic BBQ for me... if I could find someone to take my bet, that is.

Fortunately the SB Nation blog for Texas Tech, Double T Nation, is run by people just as friendly as those folks over at Track ‘Em Tigers. I e-mailed Seth, one of their writers, out of the blue to see if he might be interested in making this little wager. I told him the terms of the bet were simple... my team wins, I eat delicious Texas food. His team wins, he gets his pick of one of several different types of food unique to Chicago.

What is it exactly, you may be wondering? It is, simply, pure deliciousness on a roll.

The ever informative Wikipedia describes the Italian beef sandwich as,

"A sandwich of thin slices of seasoned roast beef, dripping with meat juices, on a dense, long Italian style-roll, believed to have originated in Chicago, where its history dates back to at least the 1930s. They are difficult to find outside of the Chicago metropolitan area."

That, while true, is only part of the story. Yes, the Italian beef starts out with thinly sliced roast beef that has been marinated in garlic and spices... but it is so much more. The beef is topped with what they call "gravy" (though it really doesn't resemble actual gravy as much as it resembles au jus)... and often so is the bread. Though the sandwiches are available "dry" (with the gravy only on the meat) the more traditional way they are served is either "wet" or "dipped." In the "wet" style, the meat and part of the roll are slathered with the delicious, delicious gravy before the peppers - we'll get to those in a moment - are added. In the "dipped" style, the entire sandwich is dipped in the gravy. As you might imagine, it isn't exactly the uh, cleanest, meal you can find in this city. We've even developed a specialized posture unique to certain beef stands. Some of the stands offer counters without stools or chairs, intended for quick lunches. To ensure that you can best enjoy your beef without ruining your work clothes, you lean way forward over the counter and balance on your elbows as you chow down. Instant tastiness, with the mess relatively contained.

Back to that last ingredient I mentioned. The peppers. They generally come in two varieties - hot and sweet. The sweet peppers are essentially just sautéed Italian green peppers. They're okay, I guess, but what really makes an Italian beef the real deal is the use of hot peppers, also known as Chicago style giardiniera. Giardiniera is a wonderous relish like concoction of hot Serrano peppers, veggies, seasonings, garlic, and red pepper flakes marinated in olive oil. It is spicy and flavorful and will make just about anything you eat taste better. And on an Italian beef? Oh it's just about heaven.

Now, there are about as many well-known Italian beef chains in Chicago (Al's #1, Mr. Beef, Jimmy's, Portillo's to name just a few) as there are ways to order an Italian beef sandwich. Unfortunately, almost none of them deliver their wonderful product. Portillo's, the supplier of last year's hot dogs, is pretty much the only one. So, while I do love the Portillo's Italian beef, I am limited in my restaurant options. Should Texas Tech prevail in the TicketCity.com Bowl, Seth will be enjoying his very own Italian beef kit, complete with enough materials to make several of the sandwiches, in all of the permutations you could imagine.

So after reading that mouthwatering description above, you might be thinking I'm kind of crazy. I mean, after the loss of Dan Persa, Northwestern's chances in this bowl game are uhm... slim to none. And therefore, my chances of BBQ are slim to none. Only two people, out of 34, actually picked Northwestern to win this bowl game in the OTE bowl predictions competition. (I'm still wondering who the other crazy person out there is... ) But... if I only decided to do a food bet in the years that Northwestern had a good chance of winning their bowl game, I'd never be able to make the bet. It has been 61 years, after all.

I mean... I might want to believe I have a good chance of winning this year, but I'm a realist. I know that unless Pat Fitzgerald manages to whip Evan Watkins into a starting quarterback in a hurry, and somehow fix the epic problems in the O-Line (we currently average 3.3 sacks allowed per game... that is absurd), the Northwestern offense is pretty much going nowhere. On defense this year, until the Illinois and Wisconsin games, we had been doing decently well. But... if Evan Watkins and the offense can't stay on the field, there's no way our defense will be able to stop the quick passing game of Texas Tech and Taylor Potts  - he who threw for more than 350 yards last year against Michigan State.

I have... only one small glimmer of hope. Texas Tech, well, they basically don't have a defense. They've averaged 30+ points and 460+ yards allowed this season, good for 116th in the FBS. That is, uhm, to put it mildly, terrible. That's like Michigan bad (who is currently ranked 102nd in the FBS in points allowed). Of course, the question is, does Texas Tech only do this against teams with actual functioning offenses? Because really, I'm not sure that Northwestern has one right now. But maybe, just maybe, Texas Tech is enough of a moveable object that Northwestern can get something going and finally break our 61 year long drought. Even if we're without our starting quarterback and potentially our starting running back, Mike Trumpy.

So maybe, just maybe, I'll finally get to enjoy some BBQ.

To see where I'll be getting delicious eats from, as well as thoughts on this game from the other side, head on over to Seth's post on Double T Nation...