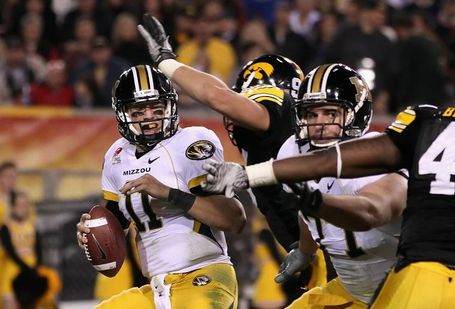 It was only one play, and yet it could be the defining emblem of the Big Ten's bowl season.  Down by four and with a rejuvenated Missouri offense storming down the sidelines with under 6 minutes to play, Blaine Gabbert rolled out to make a routine throw.  He didn't see that Iowa's Micah Hyde had stepped in front of his target receiver who was angling to block.  Hyde speed-skated across field, skirting defenders and letting blocks set.  The magical 72-yard return saved the day and the season for the embattled hawkeyes.

It was all too fitting that after five frustrating fourth-quarter collapses, a defense used to letting itself down stepped up.  The Pick 6 couldn't have come at a bigger time for the Hawkeyes, whose offense was hemorrhaging turnovers.

Iowa's gameplan surprised no one.  The Hawkeyes fearlessly put its offense in the hands of Offensive MVP Marcus Coker, who delivered a 219 yard performance barreling down the sidelines and spinning in the trenches like a seasoned veteran.  Who could imagine it was only Coker's eighth collegiate game?

Although Norm Parker's defense occasionally looked winded, it played the bend but don't break to perfection.  The ever present front four got pressure without a rush, and despite being limited by double-teams for most of the night, star Adrian Clayborn made his presence felt when it mattered the most.  The result was clear: Missouri went 8 for 15 on 3rd down, and Blaine Gabbert was frequently forced to unfasten his chinstrap and head to the sidelines.

A brave play-action call on 3rd and 3 was the icing on the cake.

So what are we to make of this?

I picked Iowa to pull the upset because I was convinced that they had the talent to overpower the Tigers.  In many ways I thought they looked similar to Nebraska up front on both sides of the ball.  What's most impressive about this win is that the Hawks overcame suspensions and locker room distractions to play the kind of 60 minutes of football we knew they were capable of all season.

It makes you kind of wonder what else this team could have accomplished.  Alas, there's no regrets tonight.  Iowa City and its faithful fans deserve a tremendous amount of credit.

The Big Ten has slayed another Top 15 post-season dragon and improves to 1-0 in the bowls.

Let's keep it up!