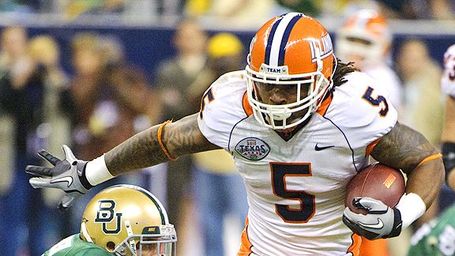 We call it Off Tackle Empire for a reason.  And for the second night in a row, the Big Ten has beaten its bowl competition the old fashioned way: by punching them in the mouth.  Last night, everyone in the state of Missouri learned the name Marcus Coker.  Tonight, America was formally introduced to Mikel Leshoure.

Leshoure's 184 yards and three touchdowns carried the Illini to their first bowl victory since 1999.  After jumping out to a 24-0 lead, Illinois withstood a 14-0 Baylor rally -- countering the comeback with a 7 play 66 yard drive that ended with a 5 yard Leshoure touchdown.

His performance earned him the Illinois single-season rushing record: 1,697 yards.

That's not to say the Illini were one-dimensional.  Nathan Scheelhaase completed all 13 of his passes in the first half -- finishing 18 of 23 for 242 yards.  He also ran 55 yards for a score on a naked bootleg to seal the Bear's fate.  Illinois would finish with 533 total yards of offense.

So, what are we to make of this rout and the Big Ten's surprising 2-0 start?

I think it's clear that Missouri and Baylor -- both from the pass-heavy Big Twelve -- weren't prepared to defend a power rushing attack.  Both teams knew it was coming and stacked the box, but neither could stop the bleeding.  At the same time, Big Ten defenses have done just enough to keep exotic offenses in check.  Last night, Iowa bent but didn't break when Missouri threw out of the shotgun.  Tonight, Illinois' defensive line took away Robert Griffin's ability to scramble.  Time and time again they made tackles behind the line of scrimmage, destroying Baylor's offensive rhythm.

It's a blueprint that Northwestern, Michigan, Michigan State, Penn State, Wisconsin, and Ohio State will hope to follow when they suit up to defend the conference's honor over the next week.

If what's to come looks anything like these first two outings, you've got to like the league's chances of delivering a second-consecutive winning bowl season.