That's my next door neighbor talking, nay, texting. It's how the kids are communicating these days. But let's be honest, he's onto something... 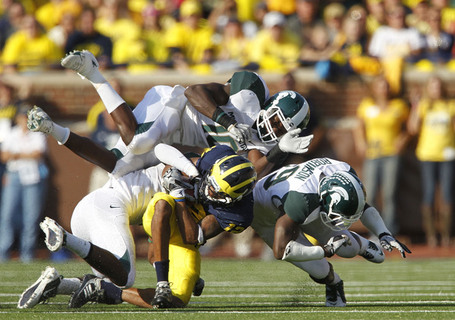 If you read ESPN or the Lansing State Journal or anything in between, you're going to be inundated with puff pieces about the following:

This is just window dressing though. Pundits, America, Vegas, Harry Potter if he existed, the fat kid from What's Happenin'...I guarantee they all don't truly believe that a solid Big Ten team like MSU can overcome the speed and talent of preseason #1 Alabama.

Why should you believe though? I'll tell ya.

MSU is not a one trick pony or a team that tripped and fell onto 11 wins. Their defensive anchors (Jones and the LB crew) are legit, not to mention extremely adept at stopping the run. 4-3 defenses are easy to find in the Big Ten, but not all of them stuff the run consistently with quick penetration and perfect tackling. The Spartan offensive anchors (Edwin Baker, Kirk Cousins) are legit. If Cousins struggles with interceptions or forcing the ball, MSU can dumb down the offense and run Baker behind the vastly improved O-Line. Baker is vastly improved himself, a 1000+ rusher whose future reads "NFL" because he can break tackles, but also take it to the house.

Michigan State is well coached, but I'm taking that statement in a different direction than one pointed at Dantonio. Last year, short 14 players and facing a talented Red Raider squad, the Spartans used their offseason in a tremendously positive manner...instead of folding or fighting. Led by OC Don Treadwell's imaginative playcalling and some excellent veteran leadership, the Spartans almost knocked off Texas Tech. When a team will work that hard in a no-name bowl and with little at stake, that says volumes about what MSU was building for 2010. 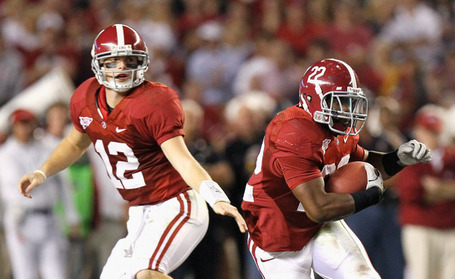 Alabama is big. and strong. and full of NFL talent. I absolutely will not fight that fact. But they haven't gelled to the point of all-out dominance in 2010. This was a sure bet BCS team that played itself out of the BCS with shoddy run blocking and defensive lapses in big games. This Crimson Tide team has a secondary that could give up some deep passes to Cousins. This isn't Alabama of 2009, the Nat'l Title team whose only weakness (consistent passing game) was overshadowed by the nations #1 defense and a Heisman Trophy winning RB.

Michigan State is full of veteran talent, some whom will be playing with Mark Ingram and Julio Jones at the next level. So before you crown the asses of Alabama, take a look at this matchup, take a look at the tremendous athletes on both sides, and savor the high possibility of a barn burner.