Per everyone...And this after Forcier's comments in this Freep interview the other day:

On academics: "I've never been the greatest student. My brothers were always the geniuses. I was always the kid who was street smart but not that smart classroom-wise. You really have to try to flunk out here. All you have to do is go to class, it's not that hard. I've always been an average student. I don't ever see myself being that smart of a student. I just feel like it's too much of a job being an athlete. It's too much of a job. You get some of these kids in engineering who are players on our team who have 4.0s, and I just look at them like, 'You must never sleep.' I feel like the work I have is a lot. I can only imagine what they have."

Michigan has needed Forcier in 2010. I know he's an odd kid who didn't work so hard this year and talks a bit too much. But when Denard got nicked up in, oh just about every game, Forcier would come in and do a more than serviceable job to run the Wolverine offense. I was at the Illinois game when Tate came in and fumbled the first snap...and then preceded to lead Michigan to victory with scrambling and pinpoint passing. Hell, he almost took the Wolverines back against Iowa, throwing for a ton of yards late. 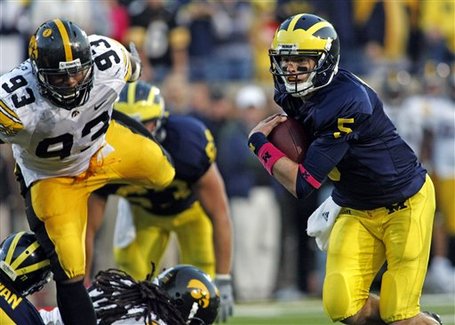 Denard will be healthy, hallelujah, but who's to say he won't get hit early? And what evidence do we have that he can make it the whole game against a staunch MSU defense? Will third stringer frosh Devin Gardner burn his redshirt and be available?

This bodes badly for Big Ten fans wanting an impressive Michigan performance against the SEC. This also is bad for Coach Rodriguez, who finally pushed UM into bowl season, only to watch an important piece of his gameplan be ruled ineligible.