Share All sharing options for: Ranking the Big Ten Bowls by Difficulty 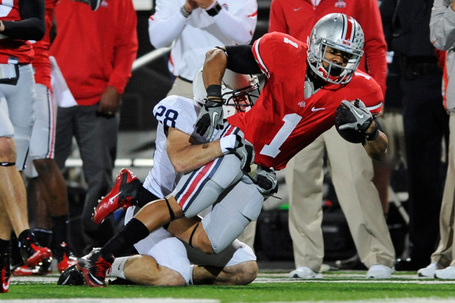 Last year, I started the tradition of kicking off bowl coverage on the site with a big picture article examining the most and least favorable bowl matchups for the conference.  In 2009 Big Ten teams competed in seven bowls, winning four of them -- including two of the three games I picked as most difficult.  This year, a record eight Big Ten teams received bowl bids.  Let's take a look at how all eight bowls stack up against each other in degree of difficulty (easiest to hardest), and the likelihood of a Big Ten win in each one.

But first, a quick note.  As of this morning the Big Ten is favored in only one of its bowls (Sugar).  This means that Vegas is skeptical of a repeat of last year when the conference upset four Top 15 teams.  Although I'm a lot more bullish than the guys at the MGM Grand, my win percentages do take the expert's odds into account.

There's no such thing as a slam dunk BCS bowl.  Just ask Oklahoma.  There's also no question that Arkansas boasts one of the best offenses in the country.  Or that Ohio State has struggled mightily in bowl games against the SEC (0-9).  So why am I calling this the most likely win for the conference?  Two reasons: First, it's the lesser of eight evils.  Out of all the Big Ten bowl matchups, I think Ohio State is most likely to get a win.  Second, Arkansas' run defense ranks tenth in the SEC.  That makes the Buckeyes a more complete team.

Don't get me wrong, Ryan Mallett may expose an Ohio State secondary that has the fewest number of playmakers it's had in half a decade.  But the last time Ohio State played a team with an explosive offense and a marginal defense in a bowl game (Oregon), things turned out all right. 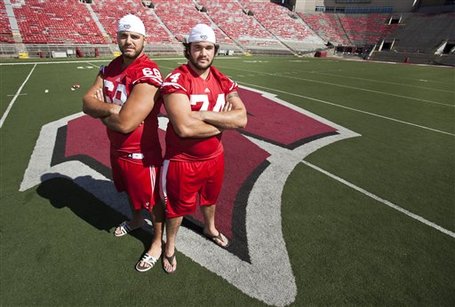 Gabe Carimi and John Moffitt: Making sure this year's Rose Bowl looks a lot like the last time Wisconsin was in Pasadena

Everyone seems to agree this game won't be close, it's just no one can agree on who's going to destroy who.  The matchup ESPN will beat to death is Wisconsin's triple-headed rushing monster versus TCU's rushing defense, which ranks third in the country.  What the talking heads will overlook is the fact that the Horned Frogs have only faced one other Top 15 rushing offense all season (Air Force).  Sure, they held the Falcons to just over half of their season-rushing yard average, but the vast majority of the teams they faced rank 90th or lower in rushing offense.

The bottom line is the Horned Frogs haven't seen anything like James White, Montee Ball, and John Clay, or Wisconsin's offensive line.  I don't want to be a mid-major hater, but I like the Badger's chances of grinding this one out on the ground.

Also, don't forget the fact that Pasadena wasn't TCU's first choice for a postseason destination, while Bret Bielema and the Badgers couldn't be happier to be playing in the Granddaddy of Em' All.

Who wants to be there more?  Wisconsin
Big Ten's Chances of a Win: 55%

Both of these teams ended the season on a sour note -- Baylor dropped its final three games after a 7-2 start while Illinois lost 3 of its final 4.  Adam Rittenberg hits this one on the head, it's a question of which Illini team shows up: "If it’s the one that pounded Penn State and Northwestern and beat a good Northern Illinois team, the Illini have a good shot to win. But if it’s the one we saw Friday night against Fresno State or Nov. 13 against Minnesota, it’ll be a long night."

Two units stand out to me: Illinois' pass defense and Baylor's run defense.  Whichever plays better on December 29th will likely earn the win.  I give a slight edge to the Illini.

Who wants to be there more?  Baylor
Big Ten's Chances of a Win: 51%

I don't believe in the transitive property in sports, but Penn State's 24-3 loss to Alabama looked at lot better after Florida drowned 31-6 in Tuscaloosa.  Penn State's offense is bad, but Florida's is terrible.  The good news for the Gators?  Their defense is still Top 10 on paper.  This game comes down to whether Penn State can move the football.  Although the 2005 Capital One Bowl is still fresh in my mind, I'm skeptical.

Who wants to be there more?  Penn State
Big Ten's Chances of a Win: 50% 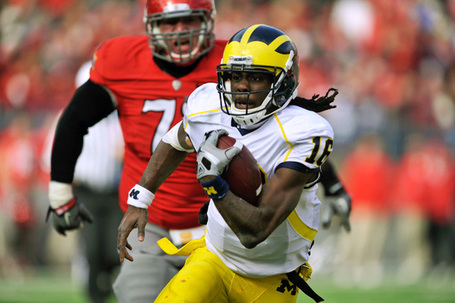 This Mississippi State team took two elite teams to the wire (Auburn, Arkansas).  Michigan got crushed by every good team it played -- unless you want to count Connecticut as a good team.  The Bulldogs are functional on both sides of the ball.  Their offense ranks 47th nationally and their defense ranks 53rd.  The Wolverines are an elite offense on paper (8th nationally), but their formula stalls against competent defenses.  Meanwhile their defense is an absolute abomination (108th nationally).

Really, the only thing Michigan has going for it is the Rich Rodriguez factor.  Players know that a loss in this one probably means the ax for their head coach.  I think they're going to give it their all.  Whether that's enough is another question.

Who wants to be there more?  Michigan
Big Ten's Chances of a Win: 48%

Talk about chameleons.  One week Iowa plays like a Top 10 program.  The next, they play like a cellar dweller.  About the only thing consistent about these Hawkeyes is their tendency to collapse in the fourth quarter.  That means if the game is anywhere within 7 points heading into the final 15 minutes, save yourself the trouble and turn it off.

The only other time Missouri faced a Top 15 defense (Nebraska) this season, they got shut down.  That's why I think Iowa has a chance in this one.  At the end of the day though, Missouri is a lot more consistent, hence their 10-2 record compared to Iowa's 7-5.  (Feel free to take this moment to laugh at the Big Twelve's bowl tie-ins).

Another factor to concern Iowans: off field trouble.  A number of sources have reported dissent among players in the locker room.  And just yesterday star wide receiver Derrell Johnson Koulianos was arrested on drug possession charges.  Iowa's lack of cohesion doesn't exactly inspire confidence.  Their win percentage reflects that.

Who wants to be there more?  Missouri
Big Ten's Chances of a Win: 45% 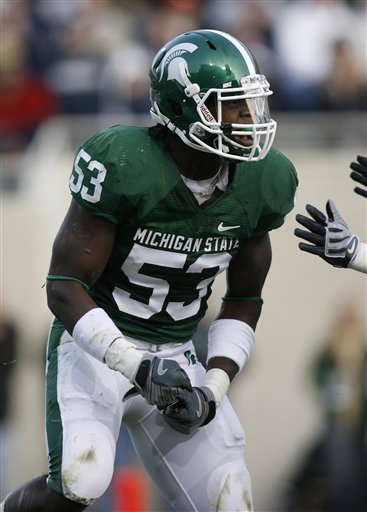 Still, the Spartan's run defense is solid (21st nationally), and Auburn gave them a rubric for silencing Mark Ingram.

The Spartans will need to be at their best to hang with Alabama.  Hopefully the disappointment from being snubbed by the BCS will give the players a chip on their shoulders rather than a lack of motivation.  The good news for Sparty is I don't think Alabama is exactly thrilled to be ringing in the New Year in Orlando either.

Who wants to be there more? Push
Big Ten's Chances of a Win: 43%

Northwestern ranked 74th in total offense in November, compared to 34th in October.  The difference, of course, is Dan Persa.  The Wildcats have struggled on both sides of the ball since his season-ending injury on November 13th.  Unless Evan Watkins makes tremendous strides over the next month, Texas Tech -- with veteran depth at the quarterback position -- and a "home field advantage" will continue to stand between the Wildcats and their first bowl victory since 1949.

Who wants to be there more? Push
Big Ten's Chances of a Win: 40%