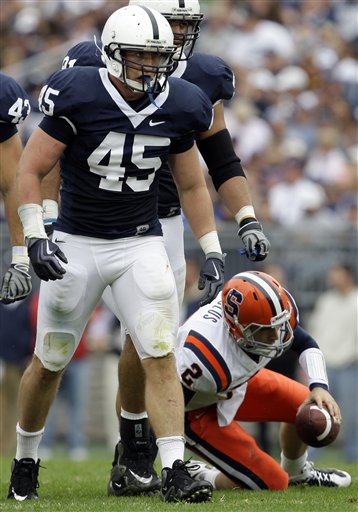 Discussion: Sean Lee was a three star linebacker in high school, a hard-working two sport athlete whose passion, talent, and intelligence were obvious to all. His star was brightened at Linebacker U as he earned a spot on some 2007 All-American teams. I picture Lee as that guy who was just always faster, always stronger, always more aware than everyone else in the gym or on the field. A former star basketball player, you can be sure his hips are fluid in pass coverage. All that aside, there is one major factor that has pushed him up draft boards: Sean Lee is one of the best tacklers of the last couple years. He delivers hits with confidence and anger.

And this is the part where we talk about injuries. An ACL injury in 2008 forced him to miss an entire season. A sprained knee and ankle issues plagued Lee in 2009. It's up to the scouts to decide whether he's injury prone or unlucky.

Scouts are scared of his injury issues and his age (24), plus he's maxed out the weight he can put on (Went from 215 to 235 at PSU). But the consensus is this - Sean Lee has "NFL starter" written all over him, preferably in the middle of a 3-4 scheme.

Mocking the Draft has him as the #3 MLB in the 2010 draft, ahead of Pat Angerer. CBS has him at #4 and getting picked in the 3rd round.