The big question here - If a coach proves over and over that he can't gameplan effectively, should the penalty be loss of job? 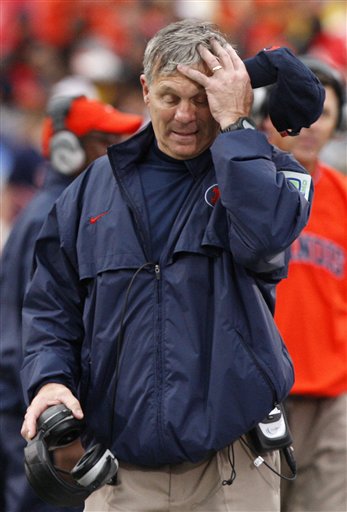 HEY Phil Steele told me this was a bounce back year!

Adaptability and Gameplanning: Hope added wrinkles to his squads offensive attack, making the RB in the backfield an added weapon and padding the pass protection. Added emphasis on the run game also showed early results - RB Ralph Bolden looked like the Big Ten's most dangerous runner early in the season before injuries slowed him.

The unbelievable amount of turnovers suffered early in the season sparked discussions about whether Hope was putting unready players in difficult situations...or whether the youth of his offensive players was simply showing through. Either way, the turnovers lessened as the year progressed, a nod towards the team's general improvement.

Discussion: Little was expected from Hope; our three TRE predictors picked an average record of 2-10 this year for the Boilers. This was a huge change from the perennially bowl bound Boilermakers of the early 2000's, but the loss of Tiller's ingenuity and the graduation of numerous playmakers dimmed the prospects of a winning season. Hope's team came out slowly, but avoided blowouts against a relatively challenging early season schedule. Late season wins over Ohio State, Michigan, Indiana, and Illinois gave Hope a .500 record in conference play and propelled 5-7 Purdue above our expectations.

What did we learn about Hope? He coaches with a lot of fire and his inexperienced troops should have beaten Oregon, Notre Dame, and Michigan State. It seems that Tiller knew what he was doing by handing the job to Hope; the first year coach didn't look overwhelmed or out of control.

Adaptability and Gameplanning: Criticizing Brewster's coaching methods and player development is so widespread it's cliche. His talented players seemingly regressed as the season wore on. There was little cohesiveness in the offensive system and barely a nod to developing Marquies Gray in a logical manner. A big O-Line was asked to pass block on 5-7 step drops far too much. If not for some brilliant individual defensive plays against South Dakota State and Syracuse, this would have been a four win team.

Discussion: The laughingstock of the blogosphere thanks to his Dorfman-like enthusiasm on Twitter and in real life, Brewsters has also violated some basic tenets of being a successful college coach. He's alienated media by battling with some members (the fat Pat tweets). His inability to keep a coaching staff together is obvious as Mini welcomes another new OC to campus in 2010. These departures tell me that his assistants don't believe in him enough to stick around and build something together.

Adaptability and Gameplanning: It's hard to blame Zook for all the injuries suffered on the defensive side of the ball. I assume all the other problems are fair game though. Me, you, Phil Steele, basically every sentient being...expected the Illini to at least be an 8 win team. But Zook's inability to make in-game changes to his offense and insistence on using Juice Williams as a dropback quarterback hamstrung this team badly. The QB carousel went around all year, highlighting this teams lack of continuity. The widely repeated meme (Zook can recruit, but can't actually coach) has never looked more real than in 2009.

Discussion: Apparently, because of a new Chancellor in Champaign-Urbana and the hunk of cash owed to Zook, it looks like the Illini will have Ronny coaching for at least one more year. It's not an ideal situation, but there's a reason Illinois is the Big Ten's most volatile program.