The Death of the Big 12 Conference

Share All sharing options for: The Death of the Big 12 Conference 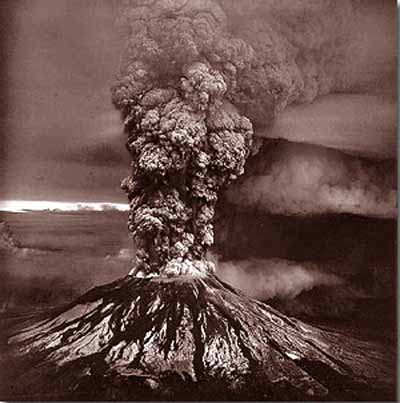 Let's get one thing straight. This piece is not designed to defame, belittle, or ceremoniously attack a league that I count among college football's finest. It's also not intended to cheer on the destruction of a modern gridiron giant. The simple fact is this: when the Big Ten announces plans to add to its collective roster in the next ten to sixteen months -- whether it expands to twelve teams or sixteen -- some other BCS conference is going to take a hit. It's Newton's third law. And although the Big East would seem like the likely loser, the more and more I think about how the dominoes will fall, the more I believe a far stronger conference is at risk. How so? One word: share. As in the percentage of television sets in use tuned to a particular program But we'll get to that.

When The Big Ten Calls, People Will Listen

First, I want to explain why the Big Ten is in a position to flex its muscle to the detriment of the rest of the college football landscape. The Big Ten is the oldest Division 1 college football conference in the United States. Its origins date back to to the late-nineteenth century when the presidents of seven distinguished Midwestern universities met in Chicago to mull over the future of regulation in intercollegiate athletics. By 1917, with the return of Michigan after a nine year absence, the conference adopted its present moniker. By comparison, the Southeastern Conference came into being in 1933, the Atlantic Coast Conference in 1953, the Pacific 10 in 1959, the Big East in 1979, and the Big Twelve in 1996. 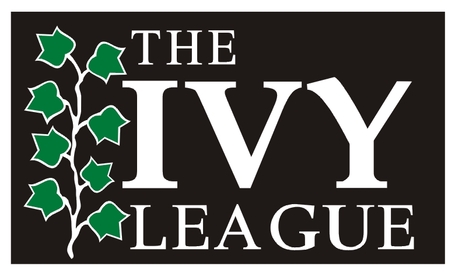 The reason this time line matters is because collegiate conferences are so much more than athletic alliances. They are horizontal academic cooperatives, sharing academic resources like research funding, and engaging in complimentary pedagogical pursuits. Most importantly, they're symbols in higher education. For a textbook example of this, see the "Ivy League" which turned a consortium of eight private colleges into the world's premiere intellectual arcade.

The importance of a cohesive brand in college sports cannot be understated, and the Big Ten is an NCAA elite. Its current revenues are somewhere in the $250 million range annually. The conference's majority ownership interest in its own television network is primed to eventually pay 2.8 billion to the league's member institutions. Combined with a billion dollar ESPN deal, Big Ten schools are earning more from television revenues than any other conference. It shouldn't be any surprise that the Big Ten is home to four of the six wealthiest athletic departments in the nation.

Big Ten academic programs are in the top tier in national rank, and the conference is home to some of the strongest public and private research institutions in the world. When the University of Texas was looking for a new home in 1994, then President Robert Berdahl compared Big Ten academics to the Southeastern Conference:

Having added Penn State in 1990, the Big Ten was now made of universities that, in the view of UT officials, matched UT's profile — large state schools with strong academic reputations. Berdahl liked the fact that [all eleven] conference members belonged to the American Association of Universities...But after adding Penn State in 1990, Big Ten officials had put a four-year moratorium on expansion. Although admitting interest, Big Ten bosses ultimately rejected UT's overtures.

That left the SEC as a possible relocation target for the Longhorns — until Berdahl let it be known that UT wasn't interested because of the league's undistinguished academic profile. Only two of 12 schools in the SEC were American Association of Universities members and UT officials saw admissions standards to SEC schools as too lenient. "We were quite interested in raising academic standards," Berdahl says. "And the Southeastern Conference had absolutely no interest in that."

Factor in that the Big Ten has been just as competitive on the field -- the conference is currently tied with the SEC for the most national championships of all time (27) -- and it's easy to see why if the if the Big Ten calls, people will listen.

Bad News for the Big Twelve 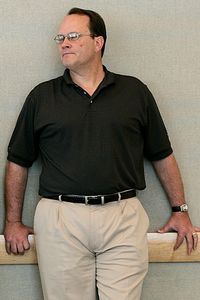 Commissioner Dan Beebe is between a rock and a hard place.

Texas, Missouri, and Nebraska -- three of the five most widely publicized expansion candidates -- are current members of the nouveau riche Big Twelve. Legislative and geographic hurdles might put Texas out of reach, but the other two are pretty safe bets. Nebraska, the former baron of the Big Eight, has watched the center of power in the Big 12 gravitate south. Frustrated by a weak north division, it probably wouldn't take much prodding to get them to walk. Missouri, on the other hand, is an even surer thing. Fed up with limited exposure in the Big 12, and marginal academics, Mizzou already practically has one foot out the door. Even the state governor is urging them to jump ship...

If the Big Ten poaches either Nebraska or Missouri, it might not seem like the end of the world for the Big XII -- after all the league will still have its two strongest powers (Texas and Oklahoma) in play, and wouldn't have any trouble courting current Mountain West giant and former Southwest Conference member TCU to pick up the slack. The problem is that Texas Christian can't make up for the dramatic depletion of an already anemic television base. No realistic candidate within the Big XII regional footbrint can.

Stuck in the Middle 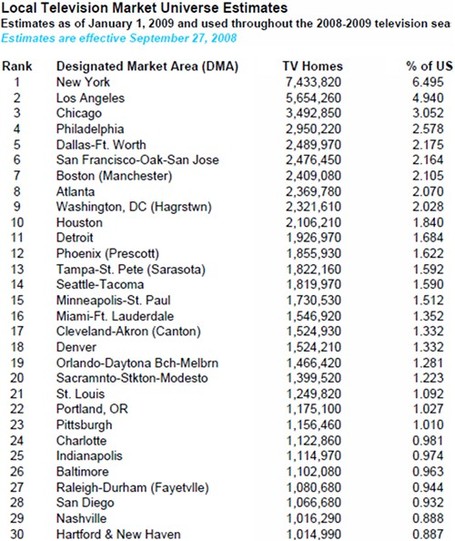 I've already mentioned that the Big Twelve is currently present in four of the top 25 television markets in the nation. They are No. 5 Dallas-Ft. Worth, No. 10 Houston, No. 18 Denver and No. 21 St. Louis.

What about overall population density? Only two states in the Big Twelve's idyllic, seven state footprint rank among the 20 largest states in the country. They are, No. 2 Texas, and No. 18 Missouri. The average Big XII member sovereign ranks 24th in the U.S. by population. By comparison, 6 states in the Big Ten's industrial, Midwestern territory rank in the top 20 -- and four of those (No. 5 Illinois, No. 6 Pennsylvania, No. 7 Ohio, and No. 8 Michigan) are in the top 10. The average state in Big Ten country ranks 14th in the U.S.

It doesn't matter how you look at it, the Big Twelve brings a dramatically smaller audience to the table, tying its hands in negotiations for premiere television contracts. The current Big XII television arrangement pays less than $7 million on average per member each year. By comparison, Big Ten member schools are earning $19.45 million, and SEC schools are earning $17.08 million. While Big Ten and SEC games are showing on national networks, Big Twelve competitors are relegated to pay-per-view.

And that's with its present membership.

When the Queen Strikes

If the Big Ten looks to a Big XII school when it expands in the next 10 to 16 months, the net loss will dramatically erode the conference's viewer base. It doesn't really matter who the Big Ten takes:

It's pretty well accepted that if the Big Ten wants Missouri to suit up, all it has to do is ask. The departure of Missouri would definitively take the St. Louis market off the table, limiting the Big 12 presence to just 3 of the Top 25 media centers in the U.S., and would take away the Big Twelve's second largest state. The fallout would also affect Kansas City -- currently the 31st largest television actor in the U.S.

If the Big Twelve replaced Missouri with TCU, they'd be effectively adding no new markets, diluting their overall share by a minimum of 17 percent. The Big Twelve could try to soften the blow by aggressively pursuing programs in large neighboring markets like Phoenix (Arizona State), Salt Lake City (Utah), or Tampa (South Florida). But it's unlikely the Big XII could convince the Sun Devils to leave the wealthy Pac 10 conference -- with its strong academic backbone. Further, it's not clear that the addition of the Utes or the Bulls would make the Big Twelve a more competitive entity from top to bottom. Competitiveness, of course, is probably second on a television network's wish list, behind viewership. After all, the SEC caters to just three top markets, but its national perception as the strongest conference in the country helped it ink a 3.5 billion dollar 15-year television deal with ESPN.

At first glance, this move seems almost preferable for the Big Twelve, because the 38th largest state in the country represents a comparably small television audience. The problem, of course, is Nebraska's status as an elite college football power -- which brings ratings, and a national following. If the Cornhuskers split, the power disparity between the Big Twelve North and South will be magnified by a factor of 10,000. The conference will scramble to plug in a fair geographic contender, and -- when it becomes obvious that no one fits the bill -- will ultimately be forced to realign divisions.

If the Big XII has trouble convincing networks now to shell out big dough, imagine where they'll be after losing the Big Red.

The first two scenarios are like Biblical plagues for the Big Twelve Conference. This one is pure Armageddon. If Texas leaves the Big XII, the conference will spontaneously collapse in its wake. Not only will the conference drop its trump ace, it will lose a terminal 62 percent of its present market share. The entire Big 12 landscape will be buried in a smoldering blanket of hot ash, molten lava, and toxic gas. After the dust settles, the remaining lame duck members will scramble to evacuate -- some, like Oklahoma, Colorado, and Kansas will find good homes. The resulting graveyard will be picked clean by non-BCS conferences, and the Big East.

What if the Pac 10 sets its sights on Colorado for expansion? What if the Big Ten takes more than one Big Twelve team? Could two conferences merge to form a strategic television alliance? As speculation abounds about the future of the traditional conference blueprint, no league appears worse positioned to weather the storm than the Big Twelve. Any one of the following scenarios will bankrupt the conference:

One scenario Commissioner Dan Beebe doesn't have to worry about -- at least in the immediate future -- is deflecting expansion overtures on two fronts. Despite talking the talk, the Pac 10's unanimous voting structure (requiring the approval of all ten member institutions to move forward) will severely hamper most expansion initiatives. The reason? Stanford. Don't forget that Stanford objected to Texas' academic qualifications when it threw its hat in the ring in the early 90s. If Texas doesn't cut it, neither will Colorado -- or Utah or BYU for that matter.

Which brings me to my final point. If the writing is on the wall for the Big Twelve, should Texas get out while the getting is good, like it did in the waning days of the Southwestern Conference? Our friend Frank the Tank addressed the possibility of a pre-emptive move by the Longhorns in his landmark expose on Big Ten expansion:

[I]f all of the Big 12 schools could be theoretically up for grabs, why the heck would the Big Ten go after a minnow (Missouri) when it could get a whale (Texas) instead? Why the heck would the Big Ten take Missouri or even Nebraska and let Texas possibly walk off to the much less financially powerful Pac-10? Why the heck would Texas just let a middle tier school like Missouri leaving for another conference put its future in limbo? Simply put, if a decent-but-not-great school like Missouri leaving could have that much of a potential impact on the Big 12, then that’s clearly evidence that the conference is unstable and maybe a powerhouse school like Texas will understand that it needs to start evaluating more stable options (if it hasn’t already). This presents a monster opportunity for the Big Ten to swoop in and solidify its place as the nation’s most powerful sports conference.

So, what do you think?