Share All sharing options for: Big Ten's Best Quarterbacks of the Last 20 Years

This popped up in a discussion thread and let me stress, this is like a discussion at the Unitarian Church, there are no wrong answers to the question. I just thought it would be fun to bring up the heavyweights.

In the last two decades, we've seen inventiveness in Big Ten passing systems and a focus on the pass like never before. So I wanted to focus on the players that benefited from this change and who I actually have seen play, instead of discussing how Benny Friedman and Bob Griese were the greatest Big Ten quarterbacks of all time.

He of the birthmark, he of the rocket laser arm, he of the "no back in the backfield, no worries I'll make something happen" era at Purdue. DB put up three consecutive years of record-breaking statistics and holds Big Ten records in passing attempts, yards, completions, and touchdowns. The surprisingly nimble Brees led Purdue to three bowl appearances in a row even though the Boilermakers defense was never that staunch. 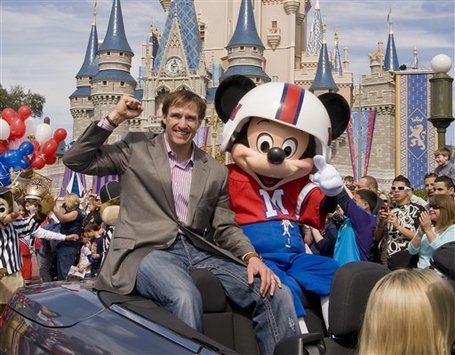 The BBall on Grass was especially groundbreaking in the Big Ten. It was legitimately weird to see a team so successfully move the ball with short, crisp passes, and the engineer was Brees. His profile on the Purdue website says 6'1'', 220 lbs., but the way he deftly moved in the pocket made him look a bit smaller. I realize Purdue quarterbacks could be derogatorily referred to as "system" quarterbacks, but Brees was going to be successful wherever he went. (see above).

That Heisman pushes him way up the ladder, the amazing passing efficiency through two seasons didn't hurt, and two BCS game appearances are icing on that scarlet cake. Smith's biggest problems in retaining any kind of Big Ten Legend status? Three main reasons:

We all hate Andy Katzenmoyer because he was allowed into college without the ability to read, but we remember the Big Kat killing that poor QB from the B12. We envy Craig Krenzel because he won a national championship while maintaining a 4.0 GPA, but we're confused how a man could have that much success without being able to throw a true spiral. 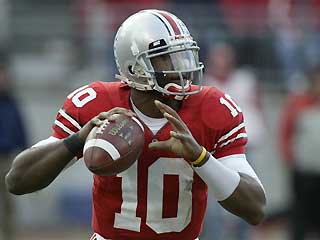 Smith doesn't really stick in the brain though. His 22-3 record during 2005 and 2006, along with those spectacular statistics, will have to suffice in lieu of actual legendary status.

The Big Ten's best dual-threat quarterback of all time will never live on in highlight packages or bowl games lore because 1) he played in Bloomington and 2) never ended up in a bowl game. The only Big Ten QB to pass for 40 touchdowns and rush for 40 touchdowns, Randle El also accumulated 2,500 total yards in each season he played. We rarely watched his games because Indi isn't a big draw and the BTN didn't exist. But when your team was facing him, you knew it would be a long day of flailing defensive ends and flat-footed linebackers. Switched to WR in The League because he didn't have the build or mentality to be an NFL quarterback...but that's why college ball is more fun. If anyone knows of video highlights of Randle El out there, please post them in the comment section. That would be a healthy refresher of this four year starter whose name lives on in the NCAA record books. 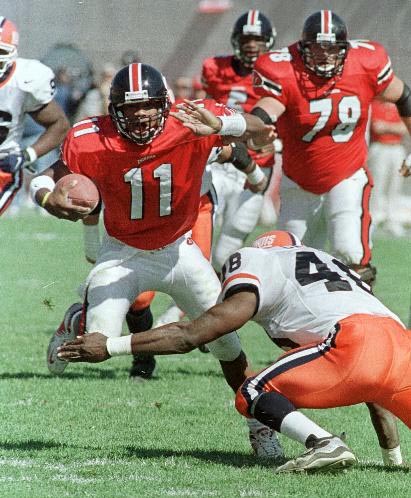 Here's a Hayden Fry quote on Randle El - "Their quarterback is one of if not the most exciting quarterbacks I've seen in this conference in years and years and years...He's extremely gifted, talented, he's got an excellent arm, throws the ball well, but he's probably as good an option quarterback as anyone in the country."

Kerry Collins won the Maxwell and Davey O'Brien in 1994 and according to Wikipedia, weighs almost 250 lbs. Good god. Michael Robinson plays fullback now in the NFL, but his leadership in 2005 helped bring the Nittany Lions back in the national picture. And Daryll Clark, skewered for not winning big in-conference games, holds numerous PSU records.

We shouldn't forget about Kurt Kittner, whose wedding picture album you can find here, or MSU quarterback Jeff Smoker, who was suspended and sent to rehab while attending State. And of course the Iowa boys, Drew Tate and Heisman runner-up Brad Banks, were named All-Big 10 a couple years apart. Kyle Orton's ridiculous 2004 season is worth mentioning too - 31 touchdowns, 3090 yards.

Brian Cupito was the head of some high powered Mini teams; his 55-25 career TD/INT output is outstanding. Asad-Abdul-Khalik has almost identical statistics and was a run threat too.