Past As Prelude: Predicting PSU's Defensive Success in 2010

Share All sharing options for: Past As Prelude: Predicting PSU's Defensive Success in 2010

Feel a little strange this week?  Weakness?  Headache?  You may even have symptoms of depression, anxiety, or craving according to Wikipedia's "withdrawal" article.  You're not alone: it's happens to most of us in the days following the first weekend without football since the beginning of August.  And no, the Nordic Combine and Women's Hockey are not going to scratch that itch.

There's good news and there's bad news.  The bad is that you still have about a month until the first days of spring practice in the Big Ten.  For Penn State fans like myself, you have to wait until March 26.  The good news?  For those of you interested in Penn State, I think I can help ease the pain by offering another opportunity to wildly reasonably speculate on our team's success next year on the defensive side of the ball.

My approach here is to to look at things in the macro, not contingent upon any hypothetical depth chart and without focusing on things like "individual players."  We'll have all spring and summer to examine starting lineups and specific team matchups.  For now, we'll take a broad, bird's eye view of Penn State's recent defensive performances and see how they may project into success on the field in 2010.

So The Rivalry, Esq. has finally retained special Penn State counsel.  First, as for "Paterno Ave": if you've been to State College before, then you know that the main street running through downtown is College Ave.  I've thought for a while that a great tribute to Coach Joe would be to rename the town's main avenue after him.  "Paterno Field at Beaver Stadium" is just too much of a mouthful, and it sound too 21st-century for such a traditional icon.  I'm sure I'm not the first one to come up with it or write about it on the internet, but there you go, just trying to spread the word.  Second, bear with me for the first few posts because I haven't written anything other than legal briefs for the past 4 years.  At least I made the post's title an alliteration and did that strikethrough thing so far.

Penn State's Defense: The Recent Past 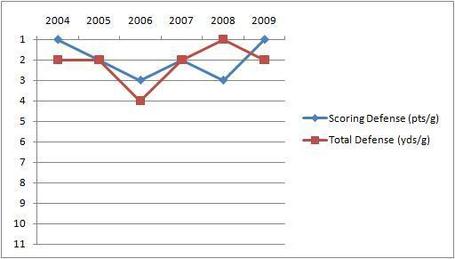 The chart above shows where among Big Ten teams Penn State's defense ranked when compared to other defenses in the conference.  This reflects all games, not just in-conference games.  CFBStats.com only goes back to 2004, but I think it's a enough for our purposes.  Going back farther may not even be very relevant.

At first glance you know the main story here: Penn State's defense has been among the top third of the Big Ten for the last six seasons.  Aside from a slight dip in 2006, you could argue that PSU has been among the top one or two defenses in the league for a while.  For our purposes here, I think the point is that they have been pretty damn good.  Aside from a handful of painful exceptions, the Penn State defense has reliably kept games in reach for the team to win.  Fans can argue over the merits/lunacy of the beloved "Bend But Don't Suck" scheme, but when you look at the stats, it's gotten the job done.

Now, when we look at the chart, do we see any clear trends?  Anything that would show some gradual (or sharp) decline, recent improvement, or otherwise?  I don't really think so.  The chart may not be perfect in this regard, however.  Using ranks, rather than a static metric (like yards per game or points allowed), allows us to see how the team compares to the rest of the conference in each year pretty well, but it may skew comparisons between different seasons.  2006 may have been a down year for Penn State, or it may have been the same for us and Iowa/Wisconsin/Ohio State did really well.  Generally, though, I don't see a trend that I could reasonably extrapolate to change the results next year.  Penn State isn't clearly slipping in the schematic arms race in the conference or anything like that, and I also don't think they have pulled away from the pack of other great defenses in the league.

Conclusion thus far: Penn State's defense has been consistently very good for the past couple years, and there is no clear trend that things should radically change in 2010. 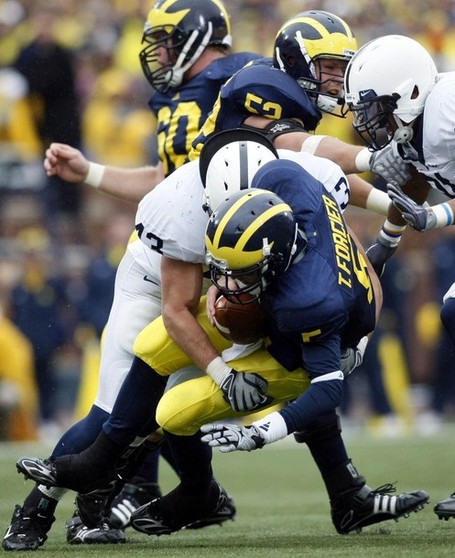 The question now becomes what, if anything, is a major factor that may throw off the expectation of another good defensive year?  Let's look at some:

Let's make this short and quick: we are talking about Penn State, and nothing has changed since the Cretaceous Period.  Actually, now they can actually tell us that the Tyrannosaurs JoePa recruited at linebacker in his early days had blue and white feathers.  The most recent change to the defensive coaching staff was the addition of safeties coach Kermit Buggs in 2003, before any of the above-referenced seasons took place.  Defensive Coordinator Tom Bradley has been on staff since 1978.  I only graduated in 2006, so one of my elders can feel free to correct me, but I believe the same defensive scheme has been in place for just about forever.

Nothing regarding Coaching or Scheme has changed  or will change: no reasons to lead us to believe that Penn State's defensive consistency is at risk here.

I'm about to talk about recruiting rankings.  It won't hurt, I promise.  What I wanted to see when I put together the following chart was two things: has the talent level of incoming players been consistent for the last couple years, and, if so, is it any different now? 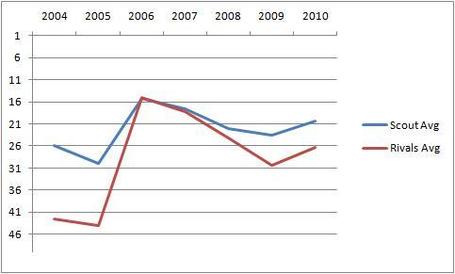 The chart above is the three recruiting classes' national rank, leading up to the year, averaged.  For instance, "2010" is the average of the national rank of Scout or Rivals' 2008, 2009, and 2010 recruiting classes.  "2006" averages the ranks of the 2006, 2005, and 2004 classes.  So it accounts for the True Freshmen, Sophomores, and Juniors playing in a given year.  The chart is NOT just defensive recruits or recruits who ended up playing defense.  Yes, that may be an issue.  Remember: birds' eye view.  This is just a very general measure of talent levels in the program at a given time.

The actual rankings of the recruiting classes don't matter here.  Regardless of the numbers associated with these classes, if they stayed consistent I think we should (theoretically, big picture) be able to reasonably expect the same coaches to produce similarly-successful defenses with the same talent levels.

This chart is not as consistent as the first.  That being said, I don't think anyone could come away saying the general talent level at Penn State has deteriorated in recent years.  The young blood coming up in the program is roughly as good as it has been in a while, and the staff has been able to put some good units on the field with that type of talent.

Now we get into the grey area of what is an objective, general statistic and what it getting into the nitty gritty of the 2010 starting lineup.  Phil Steele would lead you to believe it's as simple as "Penn State's defense has 5 returning starters."  This is another topic that is debatable, but I disagree that its that straightforward.  Maybe the number of returning offensive lineman is a consistent measurement.  You don't typically rotate that position during a game, O-lines need time to gel, etc.  Returning quarterback is probably also pretty straight: QB's need game time to get comfortable and then succeed.  But defense?  D-lines get rotated throughout a game; the best players may start but the backups get game time.  Nickel packages put non-starting defensive backs on the field on a consistent basis.

I wouldn't want to ignore this completely, but I don't know how much "Penn State returns 5 of 11 'starters' in 2010" factors into the above macro approach.  I don't have statistics regarding how much turnover there was in any particular year the last few years, but obviously it was occurring and the defense managed to retain a certain level of effectiveness.  Problems with ignoring this?  Skewer me in the comments.

So we have a defense that has maintained a very high level of play for the past six seasons.  They've stayed within the top third of the conference and flirted with the very top.  Penn State has managed to sustain this success over at least a six year period, despite the player turnover.  The same coaches have been in place during this time, and will be in 2010.  The same schemes have been employed.  Penn State has, roughly, been feeding the same talent into the system to produce these results, and will be at that level this coming season.

So what happens in 2010?  Penn State fields another defense among the best in the conference.

There are arguments to be made to the contrary, and we have months to discuss them.  But now, when you Penn Staters start hearing "No Sean Lee, no Navarro Bowman, No Jared Odrick....No good" all offseason, you will at least have some counterpoints available.  Pro bono, of course.