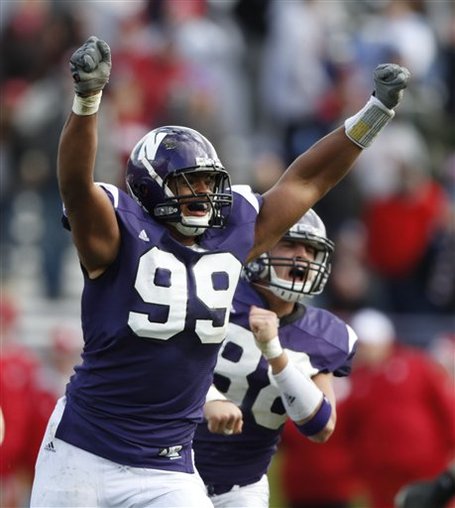 Hometown: Rutherford, NJ. Went to Don Bosco Prep where he played for the powerhouse football team...DBP has it's own Wikipedia page, making it almost as cool as MY high school, two-time Class B State Champions in Competitive Cheerleading. Take that DBP, take that. O-E (clap clap) O-E (clap-clap).

Weaknesses: Injury riddled in the last year, not fast around the edge, disappeared at times, not as big a motor as Brandon Graham

Discussion: Statistically dominant when healthy and why shouldn't he be? The tremendous reach he gets at 6' 7'' allows him to screw up plays just by falling toward the quarterback. Put on a little weight at NW and it didn't slow him a bit; as one commentor said, my god is he quick off the ball.

My favorite Wootton move? I love to watch him speed rush off the outside and when it seems he's blocked off from the QB, he'll pivot and push back into the middle to pressure the QB. It takes some effort and agility to execute that move.

Wootton's injury problems would drop him in many drafts, but he looked strong and healthy as 2009 progressed.

Different scouting services have Wootton all over the place -

Like Marissa Miller, the body is the selling point. If he shows any agility at the Combine (which he will), a 2nd round position is realistic.