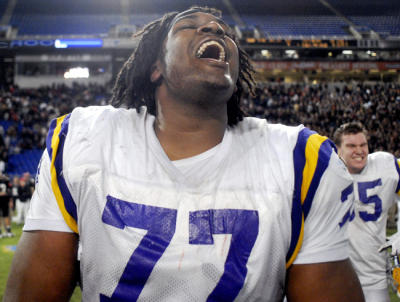 I'm sure a few of you have noticed that we don't do much coverage of recruiting on the site.  This is intentional.  Although we're deeply entrenched in Big Ten football year round, we believe that as a source we're ill equipped to keep up with the fast and fickle nature of the recruiting process.  We're also a bit limited in our ability to get unprocessed information.  Unlike covering college football, where games are broadcast live, and (with the help of a faithful DVR box) a casual pundit can turn a source inside out, access to high school media is inconsistent.  Because more often than not we can't see a prospect perform first -- or even second -- hand, it's a lot more difficult to offer objective coverage.

The exposure we do get is filtered through a professional lens.  I mean seriously, can you remember the last time you saw a highlight reel that showed a player drop as many passes as he caught?  If I'm truly honest with myself, my perception of recruits is hugely influenced by extrinsic qualifiers: stars and highlights.

It's because of this that -- just this once -- I won't pretend to be omniscient.  Today I'll watch signing day coverage just like everyone else: on pins and needles, and with a grain of salt.  Because no matter what Dr. Saturday says, ours is a sport where development matters at least as much as potential.