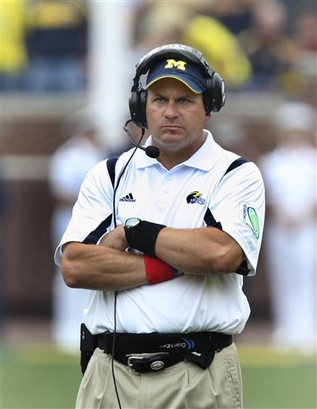 In case you haven't turned on the TV or fired up the ole' interweb (which is impossible, since you're reading this esteemed blog), you may have missed that the news about my beloved University that is being splattered across the ESPN bottom line. The University faces 5 NCAA violations, and has 90 days to respond. A recap of these violations:

• Football players were required to participate in more than the maximum allowed practice hours by anywhere from 20 minutes to two hours a week.

• Graduate assistant coach Alex Herron provided "false and misleading information" to NCAA enforcement staff on whether he monitored summer workouts he was not allowed to attend.

• Head coach Rich Rodriguez "failed to promote an atmosphere of compliance within the football program and failed to adequately monitor the duties and activities" of his quality control staff.

Not that we didn't know this was coming. Back in August when the Detroit Free Press's own joke of a journalist Michael Rosenberg broke his leaky and woefully underresearched, unsubstantiated, hyperbole-laden shot at Rich Rodriguez (but of course, I'm not biased), we knew this day would come. Admittedly, the charges are worse than many, including myself, had assumed them to be. However, it appears that many of the violated guidelines in question delineated by the NCAA are vague, misunderstood, and are commonly believed to be violated by pretty much every other major NCAA team. In terms of the violation, there are only a handful of REALLY bad charges in here (the dishonest grad student is shameful, but that's why he's not a coach). The blame lands squarely on Rodriguez for poor record-keeping practices by his subordinates, as well as a misinterpretation of the grey-areas in the NCAA guidelines concerning allotted stretching time and the roles of our "quality control staff." There certainly was no malicious intent. With this in mind, Michigan should emerge fairly unscathed from this whole ordeal. [Edit: the skinny on what exactly the allegations mean and their likely consequences are put in layman's terms here].

Let's just hope this is the end of it, and no backlash incident occurs that would further destabilize the already-fragile program. What kind of incident, you ask? Well, let's just hope somebody doesn't think it's an excellent idea to poll disgruntled former players on the matter for a bias-free opinion, blowing this whole thing out of proportion. D'oh! Ladies and gentlemen, Morgan Trent:

Morgan Trent, former U-M cornerback, played one year under Rodriguez: "I'm not surprised because I know what happened, and I know what kind of rules were broken. I couldn't see how they were going to get out of that.

"Whatever steps need to be taken (to restore Michigan's winning tradition), I'm all for it. What is happening right now obviously is not working. I don't know how long they're going to let this last until changes are made. This year is going to be the tell-all what's going to happen. We can't have three losing years in a row. Not at Michigan. To lose seven of last eight games (in 2009) is an embarrassment."

So much for promoting an environment of unity. You know what I think is an embarrassment? Former players who got regularly smoked during their career as a woefully average defensive back, then dish on a coach they only had for one year. Well, this is a fine mess we've gotten ourselves into.

The Freep's agenda is unfair, and it's irresponsible as a (formerly) respected "news" source. The worst part: it's obvious. Consider, for example, the Freep's all out indictment of Practice Gate 2009, with front page spreads about Rodriguez mistreating his players, making them practice for hours and hours (Rosenberg reported 9 additiona hours of practice on sunday. The actual amount of time exceeded was 20 minutes. Stretching.). Then, on signing day earlier this month, the Freep immediately persecuted Rodriguez, demonizing him as sullying the good name of the University, by signing the "criminal" mega-athlete Demar Dorsey (who was acquitted--read: all charges dismissed, not guilty--of crimes he was accused of committing when he was 16). Meanwhile, the freep relegates to the back page the news about MSU's Glenn Winston, who was released from 180 DAYS IN PRISON and was practicing the following week; reinstated immediately by Mark Dantonio. And it's not like this kid was drinking or smoking pot. Winston broke another human's skull. He spends 180 days in jail over the summer, and is back on the field in the fall. The lack of even any attempt to conceal the obvious double standard is laughable. To make matters worse, Michael Rosenberg, the Freep's king of anti-RR propoganda, is a Michigan grad. How's that for a laugh? But I digress.

What does this obvious anti-RR agenda accomplish? The answer may not be clear to those who wish to see RR fail, but it is painfully clear to the impartial observer, who is laughing as our program devours itself. The answer, of course, is nothing.

Allow me to illustrate. After several stellar recruiting classes, Rich Rodriguez finally has his type of players in the system and is building the program in a way that he sees fit. The consensus, especially amongst those of the elite coaching ranks, is that Rich Rodriguez has this program poised for a breakthrough. Logically, Rodriguez has consistently won big at every level with his type of players--which, by the way, he has been lacking his first two years at Michigan--running his type of system. Given a few years for these players to mature, there is little doubt that Rich Rodriguez will start to win.

Now, let's hypothetically say that Rosenberg et al succeed in ousting the embattled Rodriguez after 3 consecutive losing seasons. Let's say optimally, best case scenario, Meech hires Bo's former All American QB and current Stanford wonder-coach Jim Harbaugh to take over the reigns. What then? Harbaugh runs a pro-style offense, and finds the personnel recruited for Rodriguez's spread n' shred ill-suited for his needs. Another losing season as Harbaugh scrambles (ha!) to assemble his recruits. Then another disappointing season for good measure as Harbaugh's super recruiting class are all freshmen and need to mature. That will be a total of 6 years since Lloyd left that the program begins to win. Wheras in the first place if everybody had kept their mouths shut, Rodriguez would have had this program winning in a total of 4 years at the helm. Another coaching change only brings more instability, more uncertainty and more losses.

Doesn't Rosenberg realize that this is realistically the best situation that he can hope for? If he succeeds, his beloved University will stumble for more than half a decade and emerge a battered mess with it's integrity barely intact, a shadow of its former self, ruined by his own hand. And who suffers the most from this whole ordeal? Rodriguez? Think again. The student athletes. For example, it wasn't enough for Rosenberg to ruin one of most important days in young Demar Dorsey's life, the day he announces which University he will be attending for the next four years, for his own agenda. Now, thanks almost exclusively to Rosenberg, 18 year old Demar Dorsey will be scrutinized to a harrowing degree as soon as he arrives on campus. His every step will have the critics poised for him to screw up (or even appear to screw up) so that they can leap at the chance to indict Rodriguez again. That can't be a good feeling for an 18 year old (or anybody, really). But who cares, right? Score another tally for Rosenberg and the Freep. What about the athletes that RR has recruited, those that have bought into the system. If RR goes, these kids are hung out to dry as collateral damage until the next crop comes in. The impact on these kids' lives is insignificant when it comes to the agenda of the media, the boosters, disgruntled former players and the fans. They just want Rodriguez out at all costs. And apparently they're willing to compromise moral and ethical integrity by lying and exploiting young men in the program for their own gain (welcome to college football), all the while dragging their University's name through the dirt if that's what it takes. That's dastardly, if you ask me.

Like it or not, the pressure for Rich Rodriguez to win has now been dialed up a notch. Though new AD and all around badass David Brandon has specifically stated that RR's job is not in jeopardy, many wonder if RR is worth the trouble he's brought. Whereas previously, many fans agreed that in all fairness Rodriguez should be allotted four to five years to prove himself. Now in light of these recent allegations, that wiggle room has shrunk dramatically to be, what many believe, entirely dependent on the team's performance this season. This added element of desperation, for both RR and the team, will make this upcoming season a very, very interesting one to watch. Michigan fan or not.