Law Buck and I share quite a few similarities and interests (legal field, cigars, golf, cfb), but our closest bond is more philosophical than an actual tangible thing. We both like taking the most flavor out of life, making an experience out of normally dull or regular activities. Case in point - Out in Columbus one night for a routine beer, we stumbled upon old Miami friends. Instead of smiling our way through hurried "howareyas" and taking off, we ended up meeting their entire group of friends, knocking down a cigar outside and then retiring back to a townhouse where I tried Absinthe for the first time during an argument about the philosophical problems with Soviet Russia's government.

I say that to say this - College football is all about experiences. Downs and points are important, sure, but the 1000 other things that go into CFB is what makes it such a powerful drug. So in lieu of actual news, here are a couple of my favorite college football experiences that I witnessed live. Leave your own experiences, stories, cigar recommendations (those will be taken very seriously)...

Big Ben runs over a linebacker

Showing up late at Yager Stadium to see a Miami (OH) football game..typically doesn't pose a problem for seating. So imagine my surprise when I showed up five minutes after kickoff and saw 30,000 odd fans packing Yager for a chance to see Ben Roethlisberger and the ranked RedHawks play a night game on ESPN. Game details are sketchy in my mind (we won), but I remember one play like it was yesterday. 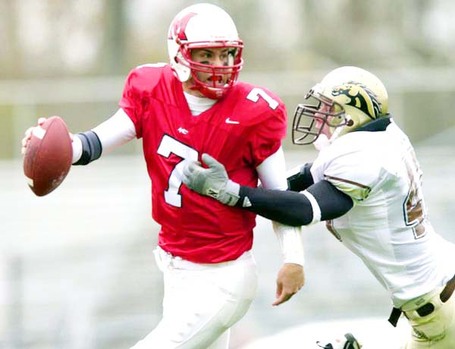 4th and 14, Miami is stalled around the opposing teams 35 yard line. Too close to punt, but too far to kick a field goal. Roethlisberger took the shotgun snap, avoided a blitzer, and crossed the LOS to scramble. Our section groaned, seeing a linebacker converging on Big Ben. To our surprise, the 240 lb Heisman candidate lowered his shoulder and punished the defender while his legs churned angrily. Skidding over the knocked down LB, Roethlisberger fell forward for the back breaking first down. We exploded in celebration, fueled by a feeling of surprise (he can run that fast?) and the general exuberance that envelopes college crowds.

Having a superstar on campus was nuts - I still remember seeing him get assessed two technical fouls during an intramural basketball game at Withrow Court for arguing calls. Or maybe I've stolen that memory from someone else; the story lives on either way.

A Big Blue comeback in the rain

The clouds had been threatening to explode all day, unlike the horrendous Michigan offense. But somehow, with two minutes left in East Lansing, the Wolverines were 92 yards away from tying their hated rivals in the 2009 edition of this annual rivalry game. The score sat at 20-13, which is vitally important because the lot of us were gambling with the "Squares" game and my stepdad had the MSU 0 and the Michigan 3. If you don't know what this game is, see below. 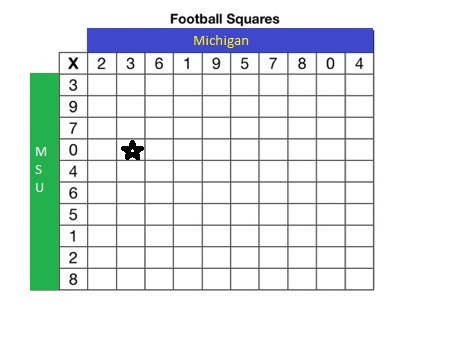 In deference to my stepdad's possible $300 jackpot, God allowed the clouds to furiously begin spitting rain into Spartan Stadium. An impossible comeback had just become a bit more improbable. But Forcier willed the Wolverines down the field and just when the moment couldn't get any more intense, a continuous wind began whipping the rain sideways. An entire crowd, unbowed and even encouraged by the sudden rainstorm, stood to scream at the young Wolverine quarterback, who responded by tossing a tying touchdown pass with seconds left. $300...gone. Lead...gone.