I took a frosh year history class at Miami (OH) and my study partner was the starting OLB for the football team, Terna Nande. Terna is a solid guy from Grand Rapids, Michigan; he was smooth with women, helped me understand some confusing rap lyrics in the song "Mo Money Mo Problems,"and graduated in three years with an education degree. Most importantly (for this blogs sake), he was well known for putting up impressive numbers in the weight room. Rumors began flying around sophomore year that he had broken the school bench press record by maxing out on something like 515 lbs and then subsequently put up the 2nd highest squad ever (620 lbs). For a 220 lb man, that's nuts, so I just figured he was a physical freak and left it at that. 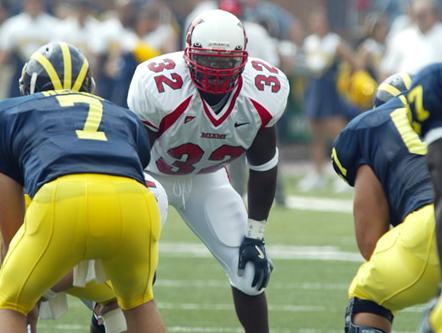 But the NFL Combine wouldn't let me leave it at that. At the Combine, Nande benched 225 lbs 41 times, the second best amount for any player that year and the most of the LB group. He also ran a 4.54 and sported a 39 inch vertical leap. Good times...I almost touched the rim last year.

I love the combine though - Individuals you invested in are put under a spotlight and asked to perform. Maybe you'll witness an incredible feat (Trindon Holliday running a 4.27 and being mad because he didn't break Chris Johnson's Combine record of 4.24)...or maybe you'll see Brian Bulaga bench 225 only 26 times. I also understand the "meat market" criticism. Those combine haters have even more to complain about now; if you go to this video of the offensive linemen benching, there are actually bleachers for people to sit and watch. I don't ever remember a raised platform of bleachers. Unfortunately, if you go to the above video, you'll have to hear the NFL commentators discussing how these numbers should be judged, as if anyone can gauge that.

For people with no background on Rolle, he was the All-American safety for Florida State who skipped his senior season at FSU because he was chosen to be a Rhodes Scholar. It's a script that Hollywood writers would pass up for being "too unbelievable," but that's not the end of it. Many people have went far, too far in my opinion, and called him the future of Black America while heaping praise his way. 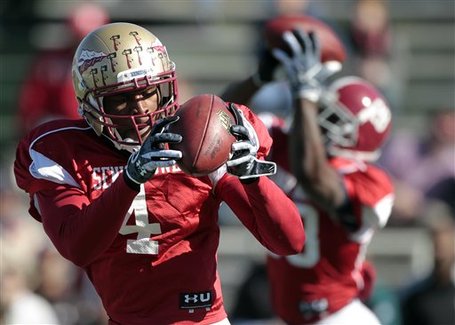 You can read the latest Outside the Lines article on Rolle here. The writer (Wright Thompson) probes the psychological battle that Rolle endures, questioning whether Rolle's tremendous ambition stems from a want to help people or from a need to fulfill others expectations. It's a great read, mostly because Thompson really gets into the head of an intriguing character and refuses to follow standard ESPN schlocky emotion-filled reporting.

But read these quotes and lines from this article below:

Rolle sings along -- except when the rappers curse. He skips those words.

A lifetime of unqualified successes...

Myron Rolle, it can safely be assumed, not only eats vegetables, he likes them.

He is a vessel for other people's dreams.

While Rolle was in D.C. for the inauguration, Princeton professor and African-American leader Cornel West spotted him on the street and bowed. Literally bowed down and said this: "You are the future of black America."

When he was in high school, riding on the New Jersey Turnpike with his dad, he asked one day, "What would it be like to be normal?" He's thought about that a lot.

A lot of things ran through his head: People want me to come back and save their country? I don't know if that's in my plan. I never thought of politics. This isn't me.

Building hype is one of the things America does well, really well, sometimes too well. So when Rolle does something "normal" like sing the cuss words or relax during the offseason, the same people bowing and making Rolle an unassailable character are going to go nuts. Myron Rolle is an amazing athlete (the #1 rated football player in the country coming out of high school), not to mention a brilliant student. But I always urge caution in putting so much pressure on an individual.