Ten Predictions for the Big Ten in 2010

Share All sharing options for: Ten Predictions for the Big Ten in 2010

Let's take a quick detour from the Decade in Review series to sneak a peek at the future of the Big Ten.  In the wake of its most successful postseason since 2002, the conference stands poised to strong arm its way back into the elite ranks. 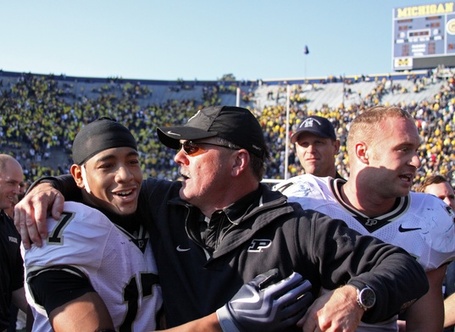 Could this be the scene in South Bend in Week 1?

Here are ten predictions for the Big Ten in 2010.

1. The Big Ten will continue to come up short against marquee opponents

Sure, we'll enter 2010 as one of the deepest -- if not the deepest -- league(s) in the sport.  But the Big Ten will continue its struggles against elite out of conference foes in September.  A young Penn State defense will get overrun on national television in the second week of the regular season when they travel to Tuscaloosa to meet (presumptively) No. 1 Alabama.  Similarly, Minnesota will get torched on September 18th when USC (and its new crop of 5-star tight ends) comes to town.  The lone bright spot will be the way Ohio State handles a Miami team that isn't physical enough to battle the Buckeyes on the ground

Counterpoint: Two of the conference's top three teams won't play an elite opponent.  The closest Iowa gets is a September 18 visit to Arizona.  Wisconsin's visit to Arizona State is next best.

2. The good guys will win the Big Ten/Pac 10 Challenge

In 2009 the league earned its first victory in the Big Ten/ACC Basketball Challenge.  In 2010, it will represent itself well against the West Coast for the first time in three seasons.  Iowa will dominate Arizona, and Wisconsin will outlast Arizona State to give the Big Ten a 2-1 edge against the Pacific 10 in out of conference play.

3. Purdue will open the season with a win in South Bend

A talented, underrated Boilermaker squad will shock the Irish in Brian Kelly's first game as head coach by upsetting Notre Dame in South Bend.  Purdue will start the 2010 season 5-1, before losing at Ohio State.  Danny Hope's squad will become bowl eligible the following week at Illinois, and the Boilers will end the regular season 8-4.

4. The Big Ten Championship will go through Iowa City

If the Iowa Hawkeyes don't claim at least a share of the 2010 Big Ten title they've got no one to blame but themselves.  Wisconsin, Ohio State, Penn State, and Michigan State -- four of the league's top six -- will play at Kinnick Stadium. 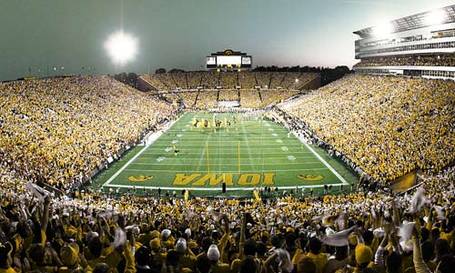 5. If Wisconsin wins on October 16th, it will do no worse than share the conference title

When Ohio State visits the foul-weather fortress that is Camp Randall Stadium, the Badgers will have an opportunity to pay the Buckeyes back for a trilogy of defeats in 2007, 2008, and 2009.  As Bret Bielema says, they'd love nothing more.

If the Badgers can upset the Buckeyes in Madison, this source says they'll do no worse than split the conference title.  How so?  Well, even with a loss the following week in Iowa City, I'll bet a resurgent Ohio State team takes down the Hawkeyes on November 20th.  The result would be a 3-way tie at the top.

I'm being serious.  Although the Wolverines hit rock bottom in 2009 -- dropping seven of their last eight contests -- embattled head coach Rich Rodriguez will finally taste success in Ann Arbor in 2010.  The introduction of 27 hand-tailored recruits will be the catalyst for a revitalized program.  The Wolverines will jump out to a 5-1 start in conference play (8-2 overall) before losing to Wisconsin in Week 11.  They'll have the chance to secure a New Years Day bowl bid the following week against Ohio State.

And by the way.  The "Rivalry" will feature two ranked teams for the first time since 2007. 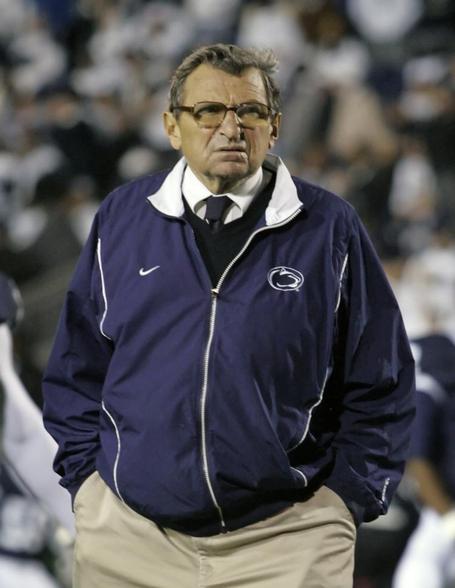 Will next year be a forgettable one for Joe Paterno?

With the loss of a veteran quarterback, and bushels of defensive experience, Penn State will struggle to re-gain its traction at the top of the conference in 2010.  After an embarrassing loss against Alabama in Week 2, the Nittany Lions will again be frustrated by Iowa.  Losses to Michigan and Ohio State will complete a lackluster season.

8. At least one Big Ten coach will be fired by season's end

After several years of relative stability, Big Ten sidelines will get shaken up at the end of 2010, with at least one head coach getting shown the door.  Illinois' Ron Zook leads the layoff list.

9. If a Big Ten team plays for the national championship, it will bring home the crystal football. 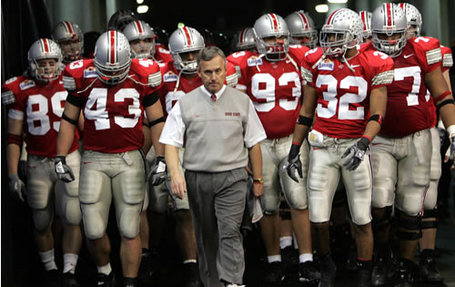 Does Jim Tressel still have a few tricks up his sleeve?

Don't get me wrong, it's a big if.  But if a team from the Midwest earns a spot to the BCS National Championship Game in Glendale, Arizona, it will have what it takes to get the win.  It's no secret that the team in the best position to make the MNC is Ohio State, who will almost certainly open the season in the Top 3 in the polls.  If the Buckeyes can handle an early out of conference showdown against a ranked Hurricanes club, and run the table in conference, they'll be primed to return to the big dance.  If they get there, they'll get even.

10. The Big Ten Conference will announce plans to expand

Exactly one year after opening the flood gates, the Big Ten Council of Presidents will bless plans for expansion by announcing an agreement in principle to add a twelfth athletic member.  Just who will get the nod?  Only time will tell...