Revisiting Big Ten Bowls in 2009-10: A sweet BCS win for OSU in the Rose Bowl

Share All sharing options for: Revisiting Big Ten Bowls in 2009-10: A sweet BCS win for OSU in the Rose Bowl

F-14s! I love when jets fly over me at stadiums but in the back of my mind I always think - So that's what it's like to be attacked by jet airplanes.

Oregon's white pants, White helmets, green jerseys are probably their best combination. I'm excited for this game and I already know the outcome.

O's all over the place.

First Drive and the Bucks  are looking sharp baby yeah. Pryor scrambles easily for 25 yards as he murders a safety, completes a nice out, completes a nice slant, completes a flanker screen, and it's first and goal. Devier Posey drops a perfectly thrown out, but it doesn't matter as Pryor checks down to a running back for a 7-0 OSU lead. 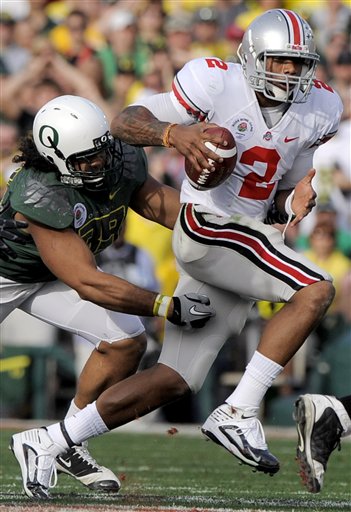 Bigger, faster, stronger is what the Bucks look so far. Two negative plays lead to a Duck punt - Your read-option is nothing to Cameron Heyward. Oregon isn't chopped liver here - an incredibly athletic sack by an Oregon DE crushes another promising Buck drive. But OSU is winning the field position battle.

Luke Wilson and the AT&T commercials are especially humorous here in Michigan, where Verizon coverage is so much superior to AT&T. Everyone loves to see those commercials in bars and then turn to their friend with an impotent, serviceless IPhone and shrug their shoulders...

Biggest play of the game so far is an incomplete pass. Jeremiah Masoli puts the ball into Anderson Russell's breadbasket, 15 yards from another OSU touchdown, and the ball clangs off Russell's chest. That would have blown this wide open.

Tough OSU D helps slow Oregon inside the Buckeye 10. It's 10-3 OSU and we've finally seen some life out of the Duck O. Oregon got it's RB's outside easily on that drive and I'll revisit that point later. Looks like the Oregon D found out how to slow Pryor - blitz and put moving people in front of him. Looks like the Bucks found out how to slow Oregon - keep the ball in Masoli's hands. A gutsy 4th and 9 conversion and a couple tough runs by LeGarrete Blount and LaMichael James put the ball in the endzone and tie the game at 10-10. 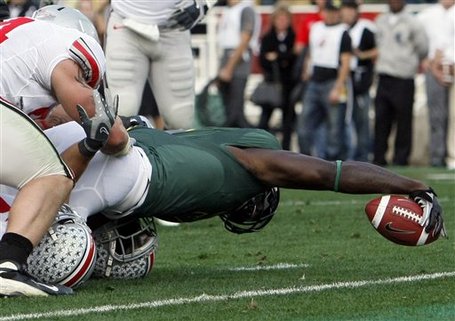 Blount just did the "tattoo on each arm, cross arms together to make a saying" thing as Lisa Salters explains how he made it from punching a Boise State player to playing in this game. It's complicated, Chip Kelly explained, and I'm inclined to agree.

TP is really zipping the ball today and dumping the ball down to his backs. See? God does perform miracles. The Bucks are moving again, throwing on any down/yard situation. I guess this is what happens when TP is confident in his throwing motion. Pryor has thrown the ball 13 times and run it another 7. Tress is putting the game on TP's shoulders and it's working so far. A drive stalls deep in Oregon territory, but Devin Barclay swishes a 30 yarder for a 13-10 OSU lead. In my notes, I have this written next to Doug Worthington: "Tall." That scribbled note becomes relevant as he deflects a Masoli pass into Ross Homan's arms toward the end of the half. Another sweet TP pass and Barclay FG make it 16-10 OSU at the half.

OSU's cheerleaders are wearing outfits that deserve to be worn at an Ugly Christmas Sweater Party. Picture...following...now. 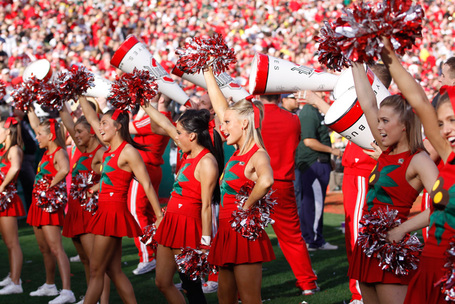 The second half has begun and Oregon picks up 7 yards on another successful first down run! Every single time...unfortunately, Kelly cannot harness this first down success throughout the game as most Duck drives will sputter out on incomplete passes. Masoli's 81 yards passing will be his fewest of the year.

Then the ref calls a phanton PI call on Antwon Chekwa for...not turning his head. Herbie explains: "It doesn't matter if the CB makes contact with the WR; if the ref doesn't see a head turn, he's going to call that." Now this is sounding like the NBA.

0-5 on third down for Oregon and make that 0-6. But they're 2-2 on fourth down, so the Ducks march on. MORE tough inside running - it's 17-16 Oregon. The Ducks are making their money on tough, hard nosed plays, not the flash and dash they're known for.

But who cares really because OSU is driving again after some incredibly accurate passes. Let's stop here - We at TRE have shredded Jimmy T all year for keeping TP in the pocket. It seemed that he was breaking out of it though v. Michigan though, utilizing his star's running power and ability to improvise. Tressel has tapped into these attributes again today. 18-28, 200 yards, a TD for Pryor, but another Buckeye drive stalls and Devin Barclay knocks a 38 yarder through for a 19-17 OSU lead. Musburger just called this game "a dandy" and somewhere, Keith Jackson smiled.

Kickoff Coverage? The Bucks have been giving up chunks of yardage to the Oregon kick returners. Absolute chunks. Barner has rushed for 60 yards and picked up hundreds more in the return game. Oregon is absolutely gashing OSU until LaGarrette Blount boots the ball through the endzone. But TP decides, to hell with it, I'll make my first arm punt of the day...and promptly throws a pick while Brandon Saine streaks wide open deep.

PUT FOUR FINGERS UP! PUT FOUR FINGERS UP! The Bucks are clinging to a lead and Oregon is picking up 5-7 yards on first down every time. The ball sits around midfield but Oregon's third down problems (2-10 as of now) are killing any chance of success. What's at the root of those issues? An inaccurate Masoli is being asked to throw slants and sit down routes into tight coverage - this is not his specialty.

But apparently, that is EXACTLY what TP wants to do today. The Oregon defenders are extremely athletic and fast, but TP is giving them fits with short, effective passes mostly to Dane Sanzenbacher.

Jake Ballard, former basketball star and the heir apparent to David Tyree when it comes to "Oh He Couldn't Possibly Catch That High Pass OH HE DID GDMN" catches in big games. Touchdown Posey and lots of people are going O-H-I-O! Yay! OSU 26-17.

Blahblahblah Great kickoff return, missed field goal, game over. Musburger wins mucho respect for his "now, the Ducks are under the gun" comment which makes me think of... 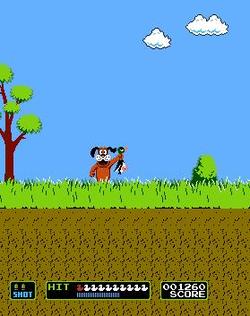 My defensive MVP's are Worthington and Kenny Rowe of Oregon. Worthington dominated the interior all game while Rowe's chased down TP about three times from behind, which is no small feat.

What were my keys to the game? The Buckeye pass coverage was flawless, never allowing open lanes for Masoli and aggressively blanketing the receivers. I know that Chip Kelly was not used to be forced into a one-dimensional running attack and his playcalling suffered. The field goal and field position battles were soundly won by the Bucks also. Each time it seemed OSU would be pinned deep, Pryor would complete a pass or pick up a first down with his legs. Time of possession dominance followed these timely first downs.