Summation: Illinois in the Aughts

Share All sharing options for: Summation: Illinois in the Aughts

This concludes our series recapping the last ten seasons in the Big Ten. 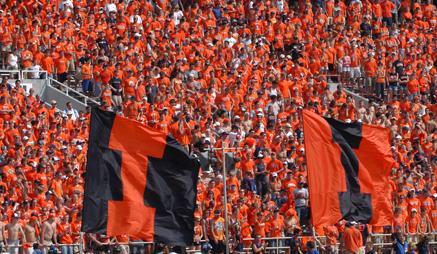 I was trying to think of the best comparison for the amazing decade that the Illinois Fighting Illini just completed. 10 seasons - only two with winning records.  But those two good seasons landed the squad in two BCS bowls.  That makes them great.  After looking through other sports, I finally found the right match.  Illinois spent this decade as the Cincinnati Bengals.  Let's go to the tape.

If you add in the fact that the two squads combined to lose their 4 bowl/playoff games, it's a really good match.  Go big, or stay home. In the NFL, it's not quite as odd to have teams rising up for one season and falling back to mediocrity.  The rules are stacked to encourage that.  But in college football, recruiting, easy non-conference schedules, and the overall arc of programs are designed to limit one year blips. Yet, Illinois managed two in a decade.  It's odd; it's not necessarily good.  Let's take a look...

A. Most Painful Loss

Where do you go with this for Illinois?  Do you pick a merciless beating? Like maybe the 45-0 loss to Minnesota (Minnesota?) in 2004.  Or do you pick a loss that kept you from a bowl game.  Like maybe the 27-23 loss to Western Michigan in 2008.  Or do you pick the bowl losses, that kept Illinois from elevating their two great seasons to historic?  It's probably that.  The 47-34 Sugar Bowl loss to Nick Saban's LSU Tigers prevents the 2001 team from having a strong argument as to being the best team in the post-Zuppke era (it's still 1951). 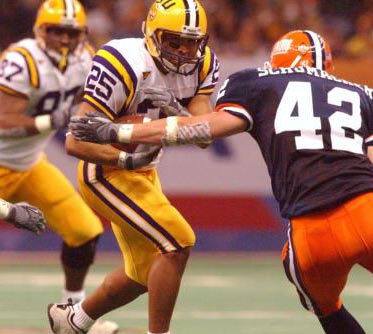 It's 2003, and Illini fans hate that there are so many others to choose from.  That squad went 1-11, with the lone victory coming over in-state rival Illinois State.  At least they beat their riva---wait, Illinois State is a I-AA school that isn't a rival?  Yeah, that's a bad year.

By the way, if you want to choose the 2005 squad that went 2-9, but was outscored by 248 points on the season (that's more than 20 points a game) including a combined 77-5 showing in back-to-back weeks against Ohio State and Purdue, I won't argue with you.

No, it's not now.  It's December 2003.  After the 1-11 season, the Illinois administration surveyed the carnage and decided that, yes, Ron Turner should remain as the head coach.  Finally, after a 3-8 debacle the next year, the plug was finally pulled.

This is the easiest one in the article.  On November 10, 2007, Illinois went on the road to Columbus to face the undefeated and top ranked Ohio State Buckeyes.  A touchdown right before half put the Illini up 7.  Another in the third made it a fourteen point lead.  Ohio State cut the lead to seven and had the ball with 8 and change left in the fourth.  The Illini picked off Todd Boeckman at the Illinois 24 yard line.  When Juice came onto the field, there was 8:09 on the clock.  In one of the most impressive individual drives you will ever see, Ohio State never saw the ball again.  Final score, Illinois 28, Ohio State 21.

There are two choices - 2001 and 2007.  I'm going with the 2001 squad.  It won the Big Ten title (the last non-Michigan or Ohio State squad to win an outright title).  It finished 10-1, and became the first Big Ten outright champion to not go to the Rose Bowl in almost a half-century.  Yes, the Sugar Bowl loss to LSU dampened the season, but those Illini were a great team.

It's December 2007.  Illinois has just finished the season at 9-3.  They didn't win the Big Ten, but they stunned Ohio State, which is headed to the BCS Championship game.  Despite three losses, the Illini are ranked highly enough to go to the Rose Bowl - their first trip to Pasadena in 24 years.  Juice Williams has harnessed his immense talent.  Ron Zook has shown that he can not only recruit talent, but coach it, too.  It looks like the perpetually sleepy giant of the Big Ten was awake and ready to become a serious player in the Big Ten.

Yes, we know how this story goes.  USC pummels Illinois.  Rashard Mendenhall leaves early for the NFL, and Ron Zook, for all of his recruiting abilities, can't seem to find a back to replace him.  The Illini start losing.  A lot. Again. We know that now. But in December of 2007, it looked like the Illini had finally figured out the formula for their success.

Even in the victory over Ohio State, there wasn't one defining play that makes your jaw drop. So, I'm going with my favorite Arrelious Benn play.  It's the last week of September 2007, and the unranked Illini are hosting #19 Penn State.  Watch the kickoff after Penn State scored a field goal on the game's first possession.  It's impressive, but that's not the play.

Move ahead to the 2:07 mark and watch the catch and the run.  Yes, we see players break tackles and keep going. But those are typically running backs - not speed receivers.  Amazing.

I know that I may be excommunicated by a certain blog that has an unending fascination with J. Leman for not selecting the initialed one. But I don't know that one player has ever embodied an entire program more than Isiah "Juice" Williams has embodied the Illini.  Talented?  Yes.  Able to consistently harness that talent? Not on your life. Does a previous game's performance have any bearing on the next one?  Never.

In the aforementioned Ohio State game, Juice was transcendent down the stretch.  Getting a first down on 4th and Inches at the Illinois 33 was the key play as Illinois was able to run out the clock (I would be remiss in not mentioning the three third down runs that Juice executed, each gaining a new set of downs).  In that game, Juice showed he was the player that every Big Ten opponent feared when he was recruited to Illinois.

Two years later, when Illinois returned to the Horseshoe, Juice went 13 of 25 for 77 yards (that's 3.1 yards per attempt) with no touchdowns, two interceptions, and 15 carries for 18 yards.  He was benched for the following week's game.  I can't think of two games (or performances) that more accurately depict Illinois this decade.

Here's the video proof.  Watch the beautiful throws in the highlights as Juice torches Syracuse.  Then notice the stats of the current game against an Iowa squad that would finish the season 6-7.  Ladies and gentlemen, that is Illinois/Juice.

Two things about Illinois.  First, we're all in agreement that Ron Zook can't coach, right?  That said, if he was fired tomorrow, wouldn't you hope that your head coach called him immediately and offered him a role in the program as a recruiting guru.  He's the Big Ten's Ed Orgeron.  There is a role for those guys in college football.  It's just not heading a squad.

Second, if you think you know what the next decade will be like for the Illini, you're lying.  Could they finally get the right coach who is able to not only lock down the ample Chicagoland talent but coach it as well?  Will they hire two more mediocre coaches that lead them to sporadic greatness?  You just don't know.  There is no reason that Illinois can't be as successful as Wisconsin and Iowa have been over the last two decades.  If you look at the recruiting bases, Illinois should be better.  Yet decade after decade, they can't pick themselves up.  I'd love to be able to say that I had reason to believe that this was the decade that changes.  But it would only be a wish.