Big Ten 2010 // Remembering an Indiana win from a decade ago

Share All sharing options for: Big Ten 2010 // Remembering an Indiana win from a decade ago 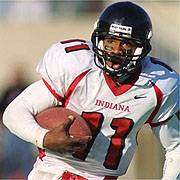 As a Gopher fan, the Hoosiers have always been a bit of a breath of fresh air.  There aren’t many "gimme’s" for my Gopher football squad (unless you’re talking about Mason-era non-conference foes… then it’s gimme-city), but in their last 10 meetings against Indiana, the Gophers have won 6.  That doesn’t sound like much, but when you’re a Gopher fan, believe me, that feels like domination.

But Indiana has played the spoiler for Minnesota in the past.  In 2004 the Gophers rolled into Bloomington with a 6-2 record, ranked in the top 25 in the nation, and feeling good about getting their 7th win.  Instead the Hoosiers handed the Gophers their 3rd loss of the season, which was the beginning of a 3-game losing streak to end the Gophers season.

But the game that sticks in my craw (no, I’m not from the south, but I do have a craw… don’t I?), happened on October 21, 2000.  The Gophers walked into Memorial Stadium on that Saturday with a 5-2 record, and ranked 22nd in the nation.  More importantly, they had just come off of a potentially program changing win over the then 6th ranked Ohio State Buckeyes IN Columbus… yes, you read that right, the Gophers really HAVE won a game in Columbus.  Shocking, I know!

Instead it was the classic Gopher Football letdown game.

Indiana, or more specifically, Antwan Randle-El, absolutely tore the Gophers apart that day.  If there was ever a game where a single player "stuffed the stat sheet," it was Randle-El against the Gophers in 2000.

Indiana finished the 2000 campaign with just 3 wins, but Randle-El’s performance on that day against the Gophers will always be stuck squarely in my craw (if I do, in fact, have a craw).

WEDNESDAY: Remembering an Indiana win from a decade ago