Share All sharing options for: Big Ten Expansion - Six Weeks Under the Influence 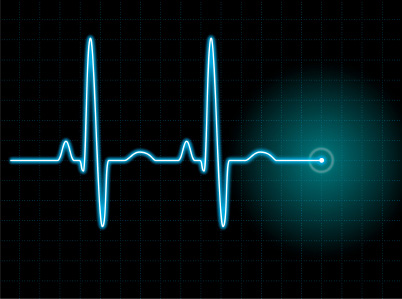 Ever since expansion became a "front burner" issue, rumors have swept across the college football landscape like wildfire.  From the mundane (Pittsburgh to Big Ten), to the spectacular (Texas to Big Ten), to the outrageous (Brazil to Big Ten), ethics in journalism have been cast aside in a race to make much adieu about nothing...or something.

Barry Alvarez's comments last week that the Big Ten hired a third-party to conduct its search, and the conference had received an initial report with 15 names on the list, fueled a parade of speculation that has reached fever pitch.  Jim Delaney's follow up that a recommendation might be made to the Council of Presidents/Chancellors by summer, keeps an answer so close, yet so far away.

Murmurs on Big Ten Expansion are sensitive creatures.  What better way to measure them than elecrocardiography?  Sadly, we can't attach electrodes to the mainstream media.  But we can keep our ears to the ground.  What follows is the first edition of an ongoing series tracking expansion hype on a weekly basis.  Let's go to the board: 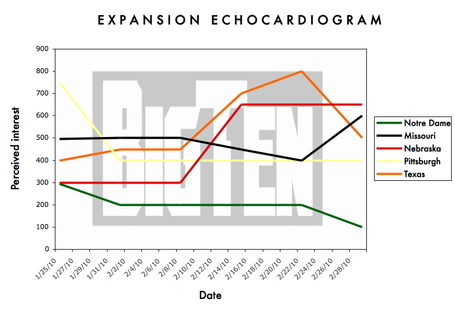 I've taken the five most popular targets for Big Ten expansion and charted six weeks of developments relating to popular perceptions.  The index works on a zero to 1,000 point scale -- the former signaling a team is completely off-the-radar, and the later indicating a program is ready to sign on the dotted line.  I think we can learn a lot about large-scale trends from this kind of seismographic approach.

Here's what the last month and a half has taught us...

1. Big Plans for the Big Plains?

Sure, the Big East put its name on the map after several student-athletes claimed via Twitter that Pittsburgh had  agreed in principle to become the Big Ten's twelfth member in late-January, but since then the switchboard has been dominated with reports that the conference is looking to rob the Big Twelve's cradle.  Missouri has been a featured, if not fervent candidate since day one.  Early last month, Texas was linked to expansion plans.  Not to be outdone, Nebraska AD Tom Osborne went on the record shortly after stating that if the Big Ten called, the Big Red would listen.  If you believe everything you read, Big Twelve teams hold three of the top five spots on the Big Ten's wish list.

No rumor reached the relative level of certainty over the past six week as Texas to the Big Ten.  A reputable print source's report that the Longhorns had been directly approached by the conference sent shock waves across the country and resulted in an avalanche of editorials.  Fans on both sides of the aisle debated the pros and cons ad nauseum, to the point where it felt like it just might happen.  Then, Texas spoke, denying that it had been contacted by the Big Ten, and swearing that it was happy in the Big 12.  While the Longhorns certainly aren't out of the question, their curt response let a lot of air out of the bag.

Not surprisingly, Texas and Missouri seem to be inversely related on the ECG.  When the Longhorn-hype was at its peak on February 22nd, Mizzou was a distant third in coverage.  As soon as Texas turned a cold shoulder, pundits went back to the tried and true Tigers.

Although much has been made about shortcomings in population, the media continues to talk about the possibility of a Nebraska move to the Big Ten.  The Cornhuskers are currently the highest rated school on the ECG because there have been no real developments since Tom Osborne spiked their stock in early February.  Although Missouri is closing the gap quickly, the two schools seem to be inextricably linked in the press.  In fact, this edition of the ECG reflects the media's belief that Nebraska and Missouri might be a pair deal.

4. The One That Got Away

Notre Dame wasn't exactly high on press confidences heading into the past six weeks, and Wisconsin AD Barry Alvarez's comments that the Irish want to continue to play a national schedule -- and that he doesn't blame them -- put this ill-fated relationship on ice.  That's where it's bound to stay for the indefinite future.

Also, there appears to be a recent resurgence in Big East candidate mentions, probably having something to do with the exposure the league gets in basketball.  It's very likely that by the time we release our next table, Rutgers, Connecticut, or Syracuse will have passed Notre Dame in honorable mentions.

Additionally, there's new talk of Maryland, and even Colorado joining the fray.

Stay tuned for more monitoring under the influence...