Seeing EDSBS reconstruct the famous "Herschel Walker steps on the face of the entire state of Tennessee" run gave me an idea. Why not pull up the 2009-2010 bowls with Big Ten contestants and give a blow by blow with commentary? Welcome to the 2010 Orange Bowl, featuring Iowa and Georgia Tech...and the rise of Adrian Clayborn's 2011 NFL Draft stock.

Georgia Tech Jerseys: I don't know. That yellow is pretty diluted. +1 for Iowa sticking true to the pee yellow. Wait, a quick wiki search of GT says their colors are old gold and white. So the dilution was purposeful. 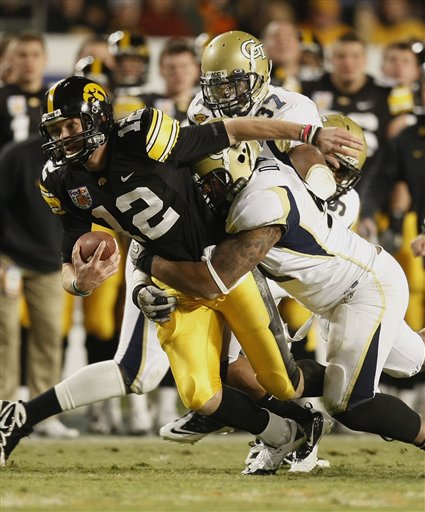 Commercials: The Flaming Lips sold "Do You Realize" to an investment company, Howie Long pushes his arrogance on GMC buyers, and Ryan Seacrest has tears in his eyes, probably from hearing too many horrendous auditions.

Kickoff: Most of you readers picked Iowa to win. So what follows should be no surprise, right? Marvin McNutt's success this year might be one of the Big Ten's biggest surprises this year...oh wait...

Fumble! McNutt fumbles after a successful slant reminiscent of the MSU game winner. Okay, now I'm watching Iowa's linebackers. They are trying to maintain their position pre-snap, but they love having no pass coverage responsibilities, so they keep inching forward. And Shaun Prater is limping after picture perfect bump and run coverage. GOD I LOVE PHYSICAL CORNERBACKS AND THE DEFENSIVE COORDINATORS WHO ROLL THEM UP TO THE LOS.

IOWA offensive success: I actually thought Brandon Wegher would break more tackles than he did this year; physical runner with a low center of gravity and all. Maybe he'll add some weight? Ended up with 113 and a touch v. the Yellowjackets anyays. Whoops Bulaga just tossed Derrick Morgan around. Whoops there goes Moeaki for 54 yards on a groundbreaking play action dump down. FOX announcers are terrible, by the way. TOUCHDOWN McNutt. McAwesome catch in the back of the endzone. You know, the Georgia Tech defenders look like football players, featuring ripped muscles and menacing stares...but they don't play that tough. Iowa 7, GT 0.

Howie Long: "If you buy a Ford, you suck in the bedroom. If you buy a truck from Toyota, you hate America. Honda? Go **** a lawnmower, you're not a man."

Vaunted Triple Option: What's the problem? Too much backside pursuit, too many men in the box, too much sideline pursuit.

Taco Bell's Diet Menu: Has anyone tried things on this menu? When you're almost passing out at 2 in the morn in the back of your friends LeSabre, you are not thinking about a light meal. When you apologetically weasel yourself into a TBell, you're not thinking about dieting. 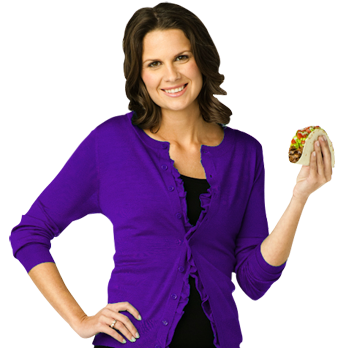 Iowa's Back: And driving. DJK catches a 31 yard pass on a double move post corner. GOOD GOD touchdown SandMan on another perfectly thrown pass from Ricky America. Iowa 14, GT 0. I was laid out on a DC couch thinking, you know, I predicted Iowa to win, but this seems surprising just the same.

Vaunted Triple Op..Nevermind: Pat Angerer makes three straight tackles. GT cannot get a lineman to the 2nd level. 3rd and 22. And Clayborn picks up a sack after beating two linemen to the edge, pressuring Nesbitt, pivoting back, and then tackling the frantically scrambling QB. Fun, fun times.

Pick 666: Ricky Stanzi has a perfect delivery. He throws a soft ball. He loves America. But he chooses to give the ball to the other team once a game for a score. Iowa 14, GT 7.

SEE???!! Another beautiful throw to the sideliness. Stanzi is 9-10 for 100something yards, 2 touchdowns and a pick6. Not one of his passes has touched the ground.

Stops, stops: Iowa punts, GT...punts again. Iowa has outgained GT 196-24. Still a long way to go though...One thing I'm noticing that I did not see before? Iowa is dominating up front on offense; the guards are pushing DT's around, the fullback is getting to the 2nd level easily.

With 7:20 left in the 2nd quarter: GT gets their initial 1st down. Angerer and Clayborn are just dominating. Clayborn is shedding blockers and tackling Nesbitt in every manner imaginable. This is like watching high school football highlight tapes on YouTube when one person is just that much better than everyone else on the field. Someone needs to make a highlight tape of all his plays in this game. I would watch that. Clayborn ends the half with a sack.

Stanzi's Wristbands: He has 10 of them, read again, 10 of them. Or more. And he's wearing them for an inspirational cause. So for all of you jerks who make fun of wristbands, I give you Ricky's Bands. Let's get a picture of that. 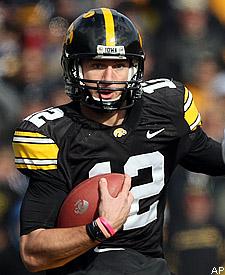 Robert DeNiro: Why does he make such bad movies now? Did he lose Martin Scorcese's phone number?

Halftime...there was a performer, but all I heard was "Ladies Night" and I kept pushing fast forward.

Running Away From AC: First 5 runs...all to the opposite side of Clayborn. That's called an adjustment folks. So then Paul Johnson goes after Clayborn, gains no yards, gets his QB smacked, and picks up a holding penalty. That'll teach ya.

Moeaki/Clutch: Tony Moeaki, currently strutting his stuff at the NFL Combine, makes a high-pointed catch for 23 yards on 2nd and 19. This is a VITAL play for this Orange Bowl. So much momentum was gained here; Iowa is driving and keeping the Yellowjackets offense on the sidelines, Stanzi is looking confident even after the pick6 and most importantly, the Hawkeyes are eating clock with first down after first down. Derrick Morgan, the All-American, is not being contained at all; instead he is being dominated by Bulaga, Moeaki, whomever. Sandeman drops a pass which would have resulted in a sure first down and goal to go. Kicker Daniel Murray says: Iowa 17, GT 7.

Running Away From AC 2.0: Nine runs away from AC result in 5 first downs and an eventual score. I watched a bunch of GT games this year and I don't remember the Yellowjackets abandoning one side of the field like this. Iowa 17, GT 14. I still feel like Iowa is in absolute control of this game. 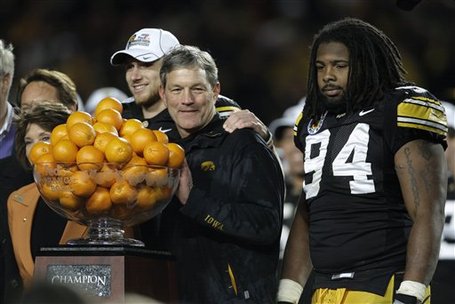 Time to worry: 8:53 left in the game and GT is within a score. 90 yards from pay dirt...What will GT do? Throw a pick. On first down. Deep in their own territory. Not a great play call against the Big Ten's best pass defense. A large problem with the triple option is, of course, the inability to make a sustained attack via the passing game.

OH GOD Jonathan Dwyer running backwards: Georgia Tech's running backs never got comfortable during the Orange Bowl. Their cuts weren't authoritative (because the LB's were waiting to kill them). The dives lacked that falling forward power (because Hawkeye defenders were cutting across the middle running lanes).

Well, that was satisfying: Iowa's running game helped change the field position in the 4th quarter and Brandon Wegher put the game away with a long TD run. Iowa 24, GT 14. I had discussed game strategy with a relative right before the game. He asked me for my two keys. My #1 key? Norm Parker, the Iowa defensive coach. Parker had healthy and talented players who fit his system perfectly this year. I didn't know if that would translate to slowing the triple option, but I hypothesized that if Parker can slow a Spread HD (PSU), an option read attack (UM), and a power run game (Wisky), why couldn't he successfully gameplan against Georgia Tech? My #2 key? Iowa's need to dominate the highly hyped Tech front 4. If Ricky got pressured early and the underwhelming Iowa halfbacks (read: Not Shonn Greene) didn't have lanes, I thought it might turn into a rout.

Both of my keys turned in Iowa's favor and this game capped an outstanding week for the Big Ten. I think I'll do Ohio State's Rose Bowl win next week, as we watch Terrelle Pryor possibly turn a corner in his development into a big-time quarterback.