SECOND IN A SERIES: THE MICHIGAN SPRING FIELD GUIDE

Oh my, where to begin. The Wolverines have had what one might call an "eventful" offseason.

Coming off a 2009  season that began with promise (4-0) then ended in a face-first plummet (1-7 Big Ten, Overall 4.33-7: I'm counting Delaware State as a third of a team), Rich Rodriguez and Co entered this offseason having endured a  second consecutive losing season second, as well as second consecutive season without a bowl. For the winningest program of all time, there's certainly room for improvement. All we wanted to do was to limp into the offseason, lick our wounds, and just be free from all the stresses of an underachieving and disappointing Wolverines football program, if just for a few months. Unfortunately, the offseason was not without its fair share of distractions that would serve to further destabilize the team and put more heat on Rodriguez, about which I opined on The Rivalry a few weeks ago. 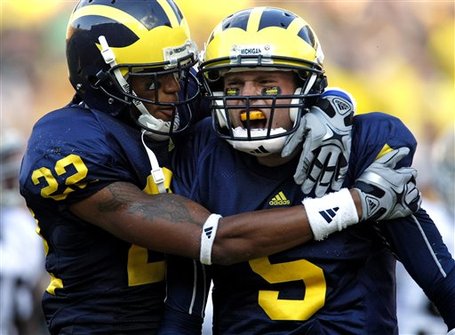 The controversy flared in February with the signing of a 27-man recruiting class that included blue-chip safety prospect Demar Dorsey out of Florida. Wolverine fans were up in arms due to Dorsey's legal history--which included 2 arrests for armed robbery as a teenager, for which both charges were dropped. Most recently, the Wolverines were in the news again for the long-awaited (though largely innocuous) NCAA allegations. Not exactly the quiet and relaxing offseason we had hoped for.

But chin up, Wolverines fans; there are causes for optimism! For one: the defense, widely considered to be the greatest weakness of the Wolverines throughout the 2009 season, took a significant step forward in the last game of the season against rival Ohio State. Motivated by the bitter rivalry (though decidedly one-sided as of late), the D played passionate and intense football for the first time all season; this was particularly true for Mike Martin and Brandon Graham, who headed this tragic glimpse of what had gone unrealized all season. Also: In February, the Wolverines signed the 12th best recruiting class in the nation according to Scout.com;(summarized/evaluated here by yours truly on The Rivalry), which addressed dire needs at CB, Safety and QB (including the RR-prototype QB, #1 dual threat QB in the nation Devin Gardner). With this recruiting class, the pieces are finally in place to make this team resemble a traditional Rich Rodriguez football team.

With the departure of linebacker coach Jay Hopson for the D-Coordinator job at Southern Miss (he will not be missed... our LB's actually worsened considerably in his tenure), the Wolverines have shifted around coaching duties. In addition to his duties as D-Coordinator, the veteran Greg Robinson will now be coaching the linebackers and hybrids, which is his area of expertise. In a very Bo-like move, the coaching staff elevated the young assistant Adam Braithwaite to safeties coach rather than seeking an outside hire. How that decision will fare, we shall see...

total returning starters: 15 (take this with a grain of salt, friends. With RR's rotating starting lineups and our lack of depth last year, "starter" by no means implies "experienced" or "good") 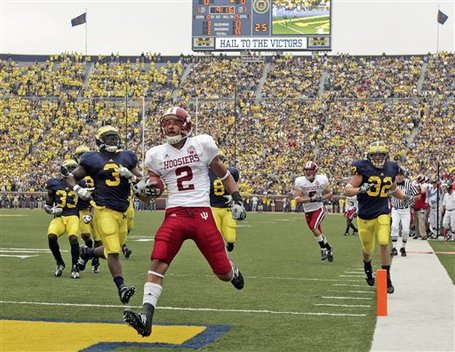 Now in the second season under D-Coordinator Greg Robinson, the defense is looking to improve on a simply awful 2009 campaign. With the departure of arguably three of the four best defensive players (All Big Ten first teamer-Brandon Graham, Senior LB/DE Stevie Brown, and Junior NFL-bound...hopefully... DB Donovan Warren), the D looks to junior Mike Martin and true sophomore (!!) Craig Roh to build upon their impressive 2009 seasons. Roh in particular, having put on 11 lbs in the offseason to bulk up to 249 lbs, has generated some noticeable offseason buzz amongst the current players as being poised for a(nother) break out season to strengthen an already solid DL unit. The Wolverines will have to show marked improvement from the LB's and safeties in particular, where significant dearths of depth and talent (at one point, a walk-on RS Freshman was starting at safety while another walk-on RS Sophomore started at LB) both critically hindered the performance of this unit in 2009.

Now with a year of on-field experience and a full offseason to heal the shoulder injury he sustained early in the season, Forcier looks to lead a more consistent offensive attack in 2010. You can read about the QB race for Michigan later on this week. With the departures of senior O-linemen Mark Ortmann and David Moosman, there is much competition between the more experienced members of the unit (Mark Huyge, w), and the more talented bevy of young linmen waiting in the wings (Quinton Washington, Elliott Mealer). Look for RS Sophomore Pat Omameh (the talented 2* engineer from Ohio) to bridge that gap by getting some minutes this spring. The RB position race is wide open with the departure of the oft-injured, yet bruising senior RB Brandon Minor, and the injury of the diminutive (5'6") Vincent Smith, who sustained an ACL tear against OSU. The favorites are the speedy yet injury prone junior Mike Shaw, the large and athletic 210lb RS So Mike Cox and RS freshman Fitzgerald Toussaint. With Rich Rodriguez's emphasis on competition, there should be many exciting position battles on both sides of the ball this season.

The key for the Wolverines this spring is to stay healthy. Injuries hurt Michigan significantly on both sides of the ball last season. A number of Michigan players are still out this spring with injuries, most notably C David Molk (foot), RB Vincent Smith (ACL) and DT Mike Martin (shoulder).

1) Will somebody... ANYBODY... step up at linebacker PLEASE?!

2) How does freshman all-everything QB Devin Gardner look? Good enough to get some minutes this season or will the staff choose to redshirt him?

3) Do any of the other young O-linemen make a strong case for cracking the starting lineup (here's looking at you, Q Washington)?