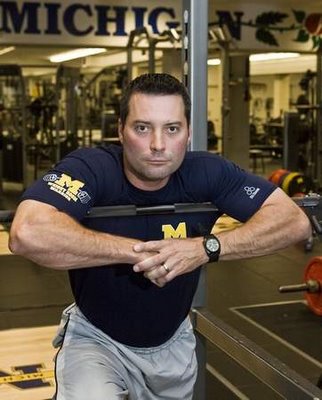 Can you name the Director of Strength and Conditioning for your favorite college football team? No? Can you name any Director of Strength and Conditioning in the entire country? You've got to be kidding, right? That's an alternate universe of obscurity that's beyond the scope of even the most rabid super fan. But if you're at all familiar with the University of Michigan Wolverines football program under the leadership of Coach Rodriguez, you've probably heard the name that is synonymous with strength and conditioning at U of M: Mike Barwis. So what makes Mike Barwis the greatest contemporary cult figure in all of Michigan sports? A mixture of toughness, grit, passion, excellence, love, fear (of him, that is), with a little bit of intrigue sprinkled in for good measure.

Through these doors walks the best-conditioned, hardest-working team in America.

This is the phrase that adorns the entrance to the newly-revamped weight room in Schembechler Hall at U of M. The phrase is a reflection of the central tenet of any Rich Rodriguez-coached team: Take pride in a superior level of physical preparation and conditioning. This pride is a direct product of being systematically (and painfully) torn down and rebuilt by Barwis, who has personally developed and implemented what is widely regarded to be one of the most effective strength and conditioning programs in the country. Don't take it from me, though. The testimonials from the pros who come back to Ann Arbor to train with Barwis (from whom he does not accept compensation)--such as Victor Hobson, Mike Hart,  Lamarr Woodley--are either in the vein of this one from All-Pro Braylon Edwards:

Mike is a high energy, high spirited type of guy. He is very intelligent and very knowledgeable. Everything is geared toward maximum performance. I haven't worked like this since ... well ever.

Or of Larry Foote:

The dude simply exudes fitness. Just listen to him talk:

I have no idea what he's saying, but it sounds like it's going to hurt (for more videos, see below).

Barwis's workouts are almost as legendary as the man himself. Of these workouts, two things are certain. You will be the strongest you've ever been. And you will throw up. Last offseason, Barwis had a sand pit, affectionately referred to as Barwis Beach, installed in Michigan's indoor training facility Oosterbaan Field House. Of the sand pit:

They like it now, said Barwis, adding they won't when they find out throwing up in sand is just as unpleasant as vomiting on a hard surface. 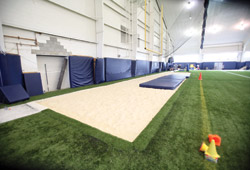 Though it is known Barwis's background is in Mixed Martial arts, the details of his past are shrouded in myth. Rumors and legends of his toughness abound and circulate freely, creating an almost Chuck Norris-esque badass halo around the man. The best ones, though, are the true ones: Barwis owns two wolves, which he is known to sleep with (true). Barwis made a WVU wrestler cry (also supposedly true). This anecdote from a local West Virginia paper must be posted in full:

According to a December 20, 2007, article in the Charleston Daily Mail of West Virginia, Barwis was once jumped by two basketball players, Patrick Beilein and Mike Gansey. "'We thought we could catch him off guard and go get him.' That was a mistake [Beilein said]. 'Bad idea,' Gansey said. 'We both jumped on him and you know how every part of his body is like a rock? He had me on his back and gently put me on the ground and gave me a neck strangle and blacked me out for like 20 seconds. No lie. All my teammates saw it and at the click of his fingers I was back to normal. Crazy, huh? But that showed how strong he was and all the stuff he can do - and nothing was wrong with me afterward.'" After this event, the rest of the basketball team decided to jump on Barwis. "'The whole team was lying on the ground a little later,' Beilein said."

Despite the epic toughness and the rigorous workouts, Barwis isn't universally feared by his players. Quite the contrary, actually. Barwis has stated on many occasions that the key to the success of his training is the mutual love, trust and respect that he develops with his players:

"That's the bottom line. These kids know that they are my family and I love them ... You have to respect somebody as much as they respect you to get them to do what you need them to do," he added. "If you don't truly care about a person, then you don't truly have their best interests at heart."

The feeling is mutual from his players. Some former players even refer to him as an uncle. An uncle with a heart of gold who makes you vomit and cry whilst enabling you to crush your enemies.

The man is a legend, plain and simple. Keep an eye out for Barwis this season on the sidelines. He's not difficult to spot: he's often the guy who is first to congratulate the players. 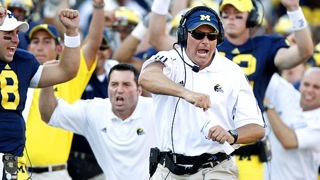