Bloomington and Ann Arbor are in the rear view mirror.  Let's head west to the twin cities of Champaign and Urbana to continue our conference road trip.

THIRD IN A SERIES: THE ILLINOIS SPRING FIELD GUIDE

Illinois at a glance...

Graham called it the Big Ten Game of the Year, but it was an out of conference matchup between Illinois and Fresno State and the good guys lost.  Strike that.  The Illini limped into the offseason on the wrong end of a miracle after Pat Hill's club came back from a seven point deficit with a smooth 20 yard post on fourth and ten with six seconds remaining in regulation.  Not content to try their luck in overtime, the Bulldogs opted for a do-or-die two point conversion.  What happened next is the stuff of legends.  The Illini brought the house, forcing Ryan Colburn to retreat and release off balance.  The errant pass was tipped directly into the arms of a 310 lb Fresno linemen who fell into the endzone like a giant Redwood.  Poor run defense and open field tackling would leave a bad taste in the mouth of the Illini faithful.

Sure, some things were out of Ron Zook's control in 2009.  Injuries saddled the Illini defense, and allowed opposing offenses to chew up turf at will.  But on the whole, our writers weren't impressed with Zook's stubborn inflexibility in game planning, and bizarre attempt to make Juice Williams a drop-back passer.  Zook earned a D- on the year, and seemed destined for the chopping block, until he was given new life by an interim Chancellor. 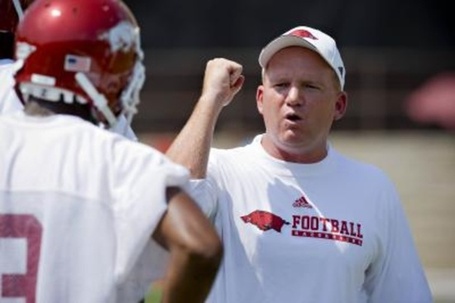 Will new offensive coordinator Paul Petrino be worth every penny?  We'll see.

The condition for Zook's reprieve?  Clean house.  Zook brought in Arkansas' Paul Petrino -- who shares his brother Bobby Petrino's appetite for the pro form -- and also stole quarterbacks coach Jeff Brohm and tight ends lord Greg Nord from Louisville.  On the other side of the ball Kansas State's Vic Koenning is primed to perfect an 8-man front in Champaign.  They're two of the best coordinators money can buy.  It remains to be seen whether Ron Zook can buy his way out of another coaching cluster----.

On signing day the Illini let several vaunted in-state players slip away, but Zook was confident that his 20 man class would "defy expectations."

The good news for the Illini faithful is that a defense that lived in the infirmary in 2009 will enter this year primarily in tact, with seven returning starters.  The bad news is the Illini must replace a four-year starting quarterback (Juice Williams), their best receiver (Arrelious Benn) and their best lineman (guard Jon Asamoah).  Yikes. 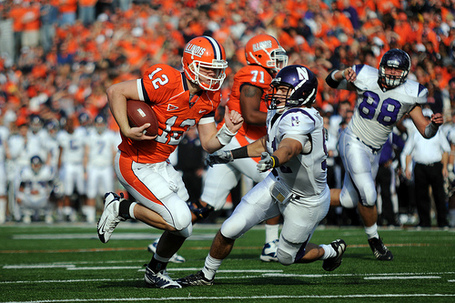 Jacob Charest is as experienced as it gets.

All three of the new kids on the quarterback block are woefully green.  As USA Today describes:

Redshirt sophomore Jacob Charest (28 of 56, 382 yards, two TDs, two INTs), [is] more of a conventional thrower, [who] started one game and appeared in three others last fall. Redshirt freshman Nathan Scheelhaase, who's more of a spread-option guy, wore a headset and ran the scout team last year. True freshman Chandler Whitmer, a four-star recruit known for his accuracy, showed up on campus in January after graduating a semester early from Downers Grove (Ill.) South High School.

Not exactly battle tested.  The good news is Illinois boasts an up and coming running back Mikel Leshoure, who has drawn comparisons to Wisconsin's John Clay.  Leshoure turned in three 100 plus yard performances down the stretch in 2009 -- and many expect the junior-to-be to break out this season.  If he does, it will be a welcome weapon in the Illini attack.

1. Will Illinois' transition from the spread-option to a more traditional pro-form offense be a smooth one, or will the system athletes be fish out of water?

2. Will former five-star Florida recruit WR Jarred Fayson live up to his potential with an injury free 2010?

3. Is the eight man front the answer for an Illini defense that finished last in the Big Ten in 2009?

There won't be any sort of honeymoon for the Illini in 2010, as they meet arch nemesis Missouri right out of the gate.  If recent history is any indication, I'd go ahead and pencil that one in as a loss.  October is just as ugly with a three game stretch against Ohio State, Penn State, and Michigan State.  If Ron Zook has any chance of keeping his job, he has to win the close contests, like dates with Indiana, Purdue, Michigan, Minnesota, and Fresno State.