When I wrote a variation of this article last year, I heaped praise on the Illini's highly recruited and monster-truck sized wide receivers whom I called the "best in the Big Ten." Extenuating circumstances made my article pretty useless (read: no offensive cohesion or a player to get those WR's the ball).

This year, the Illini's backfield looks like a strength, featuring steady handed Jason Ford and Mikel LeShoure, a troubled but talented young man with experience and freaky physical talent. Could their success go unnoticed due to overall Illinois mediocrity? Yes. But tackling either will still be a challenge whether their on a bowl-bound or moribund Illini team.

Law Buck compared him to John Clay, but I see more of a Beanie Wells here. We'll call him LS, as in: You bought the Luxury Sedan because it looks great, but it's also got a great motor and some fun toys. LS, 6' and 230 lbs, fit fine in the zone-read offense by punishing safeties, cutting quickly to avoid tacklers, and effectively catching passes on wheel routes. His highlight tape shows a powerful runner who falls forward and possesses that coveted "other gear." 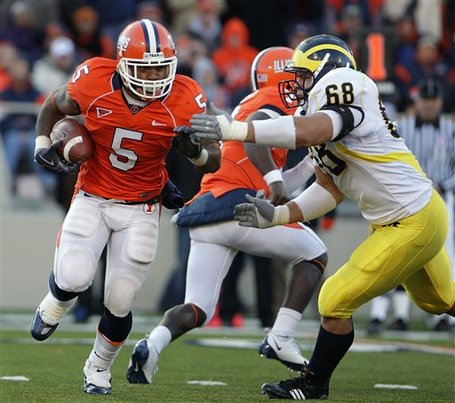 The way he runs, the confident way he jump cuts or bowls over safeties, you would have thought LeShoure's star would have been a bit brighter in 2009 and 2010. This lack of recognition seems to be his own doing. A quick Google search leads us to terms like "had to battle out of the doghouse" and "broke jaw in altercation with teammate." But after an early suspension in 2009, LeShoure did in fact battle onto the scene, running for almost 800 yards and earning Big Ten Honorable Mention honors.

Another freak athlete, Ford is listed at 235 but apparently ran something 4.4ish in high school. Though his explosiveness isn't as pronounced as LeShoure's, it will not hurt the Illini to have another experience back. Two years ago, Ford destroyed Indiana for 172 yards and accumulated 97 carries last year, third on the team. 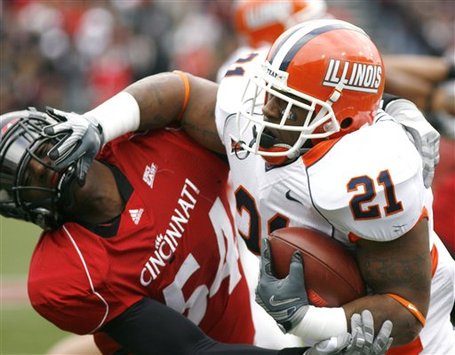 I would write more about Jason Ford, but he's never really broke out the way I expected him to. Was he hamstrung by defenses stacking the line and disrespecting Juice's throwing? Probably. Is he as talented as LS? Probably not. But with the move to a pro form style offense sure to ruffle lockerroom feathers and confuse some newbies, it helps to know that the two men in charge of rushing the football have years of experience under their belts, not to mention loads of physical talent.