Summation: Northwestern in the Aughts

Share All sharing options for: Summation: Northwestern in the Aughts 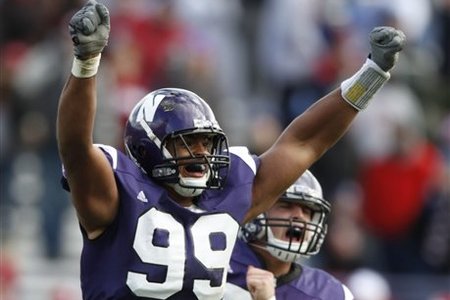 If I could pick a word to define the decade of the Aughts for Northwestern, it would be "resilience." The Aughts weren't a remarkable decade for the Wildcats. While they had ups and downs like every other Big 10 team, their highs weren't quite as high as those of the 90's, and their lows (fortunately) weren't quite as low as the pits of the program in past decades. And yet... If any Big 10 team of the Aughts could lay claim to representing that old adage of, "It's not how many times you get knocked down, but how many times you get back up" it would have to be Northwestern. You could see this in their many stunning comeback victories, in their season saving win streaks, in their perseverance in the face of tragedy, and in their year-to-year records. It would have been easy, after the decline in 2001 for the 'Cats to return to their old losing ways and finish the decade in the bottom of the Big 10 barrel. But they didn't do that. They got back up. Over and over again.

While the Aughts had many low points for Northwestern, none of them can come close to matching the futility of past decades, so I've decided to name this category "the worsers." Yes, I know it's not a word, but just go with me on this one.

Northwestern had a lot of losses in the Aughts. A lot of bad losses. Yet, my most painful loss comes in a recent game... the most recent in fact. Oh, I know, it's not quite standard to pick your worst loss as a bowl game, but this one still smarts. Therefore, I pick the Northwestern loss to Auburn in the 2010 Outback Bowl as the worst loss of the decade. 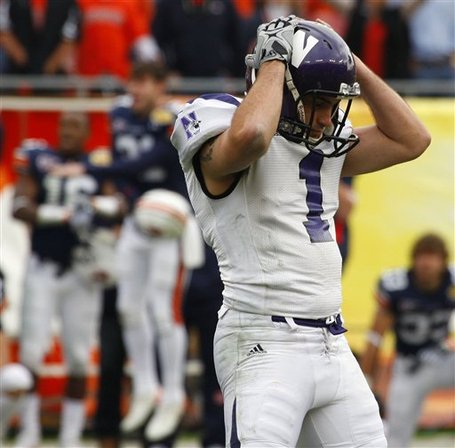 At this point you might be scratching your head. How can a bowl game qualify for worst loss? It's the post-season! And it came from a year with a winning record! I know I know... but I can't recall any other game where the 'Cats came back so many times... raised my hopes so many times... and then failed spectacularly. I guess I should have expected a bowl loss, it is after all, what we seem to be good at. Yet, this year felt different. We salvaged the season with the game at Iowa. We somehow hopped over Wisconsin to grab a spot in the Outback bowl. We came back from being down by 14 points twice! We went to overtime! We ran three end game plays! And we lost... on a fake field goal. A missed block. All that, all that for a missed block? I'm getting angry all over again just thinking about it. 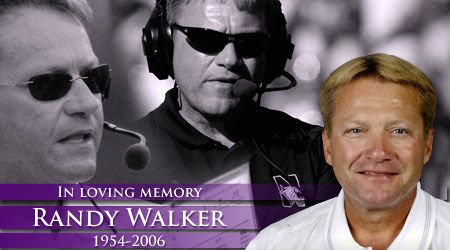 June 29th, 2006. The day Randy Walker died. It's true... my low point didn't occur during the season. And it wasn't really a game moment. Walker was a great coach. He wasn't officially the best at Northwestern, but he was great. He was 2nd in career victories, and went to 3 different bowl games. He introduced the spread offense. and even though the program was a bit uneven from 2001-2004, 2005 had looked up with a 7-5 record and a trip to the Sun Bowl. It seemed like things could only get better in 2006... but it wasn't to be. The Northwestern community and college football in general was robbed that day.

Because there's got to be some in the decade, right?

I'm going to cheat a bit here, and nominate two games. Minnesota, 2000 and Michigan, 2000. The games occurred back to back and were part of Northwestern's only Big 10 championship season in the Aughts. In the Minnesota game, Northwestern did what they do best and bounced back for an absurd comeback capped off by a last play Hail Mary tipped touchdown pass. That play is so amazing it even has a name. More on that later. 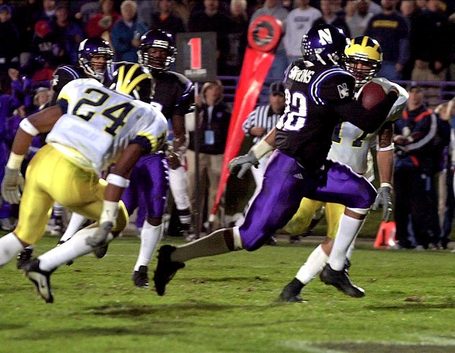 The Michigan game, the very next on the schedule, was notable for different reasons. Northwestern would eventually share the Big 10 championship in 2000 with Michigan, but even though they had to be content with a co-championship, they at least got to revel in a head-to-head victory. Northwestern managed to put up 54 points on a good Michigan team. That was nearly the most points that Michigan had ever given up. Oh, and I almost forgot, Northwestern DID set the record for most yards given up by Michigan in a single game, at 654. Take that, tradition.

I kind of have to go with the 2000 squad on this one. While they weren't as great as the '95 or '96 editions, they did give us a co-championship, a record breaking rusher, and a few amazing games. Let's just ignore that 66-17 bowl loss, shall we?

This one is sort of tough. Northwestern didn't have any bowl victories in the Aughts... so there's no obvious contender there. They didn't appear in the BCS. While there were many memorable games, it's hard to say that any individual game is head and shoulders above the others... Given all that, I'm just going to be completely arbitrary and select the end of regulation of the Michigan game in 2000. Sure, Northwestern would split the last two games of the season and it would take a gift from Purdue to even earn that co-championship... but... keeping your hopes alive in such a spectacular fashion over a great team? Awesome. Just awesome.

Could I really put anything here other than Victory Right? The name comes from the playbook, but the legend comes from the result of the game and the season. A four score comeback against Minnesota. An eventual co-championship. All because of a last play, hail mary, tipped touch down catch. Whew.

The set-up: Northwestern reeled off four scores in the 4th quarter against Minnesota to tie the game at 35. Three seconds left on the clock. One last offensive play. Just past midfield. Too far out for a field goal so... might as well throw the hail mary. Everyone knows it's coming. Going to be a jump ball in the end zone. The ball is heaved in the air... Northwestern's receivers and Minnesota's defenders jump for it and....... well you'll just have to watch the clip to see how it ends. 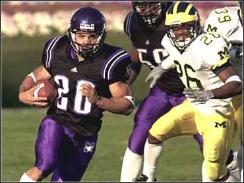 A case could be made for Tyrell Sutton, but I'm giving the award to Damien Anderson. It's true, he played only two season in the decade, but one of those seasons just happened to be his best. In 2000 he entered his name in the record books as one of the few players in Big 10 history to rush for 2,000 or more yards in a single season. His Northwestern records of rushing yards in a season (2,063) and rushing TDs in a season (23) still stand and don't look to be broken anytime soon.

He also managed to finish 5th in the Heisman voting that year, and was a runner up for the Doak Walker award (best RB). It is also worth noting who exactly Anderson finished behind for the Walker award. The winner of the award that year was none other than LaDainian Tomlinson. I'd say that's pretty good company.

As noted above, the theme for this decade has been resilience.  The 'Cats seem to be on an upswing, despite the terrible loss to Auburn in the Outback bowl. Hopefully we can continue this trend and snag that elusive bowl win in the 2010s.