Summation: Penn State in the Aughts

Share All sharing options for: Summation: Penn State in the Aughts 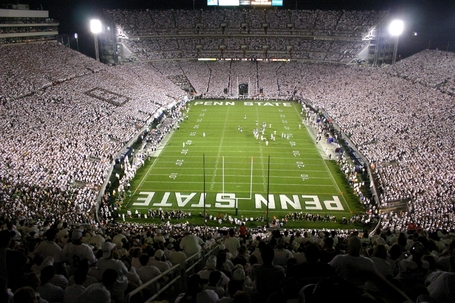 The last ten years have been a tale of two programs for Penn State.  From 2000-2004 Penn State went through the worst stretch of the Paterno Era, widely regarded as "the Dark Years."  That five year span saw a record of 26-33, with just one bowl appearance (and a loss at that).  Calls for Paterno's retirement/head were loud.  In fact, Paterno felt compelled to publicly address the criticism:

Speaking first to a small table of media members, Paterno suggested that he would consider retirement if this [2005] season -- one he believes is filled with promise -- instead leads to disappointment.

"If we don't win some games, I've got to get my rear end out of here," Paterno said. "Simple as that."

The man delivered on his word: the 2005 season was a renaissance following the Dark Years, and the team posted a record of 51-13 in the second half of the decade with two Big Ten Championships and three top-10 finishes. 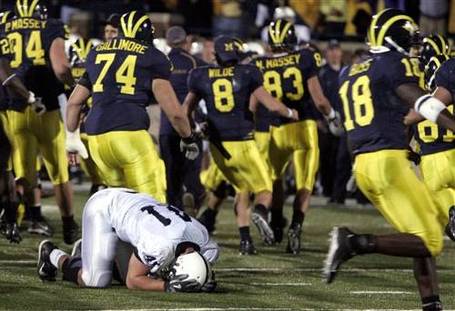 A. Most Painful Loss

There were some painful times in the 2000's.  Many of them preceded by an announcer saying the words "Morelli back to throw..." or "the Iowa Hawkeyes take the field."  The worst though?  2005, Penn State at Michigan.

Henne to Manningham (via bguman)

I'm on October break of my senior year at Penn State, sitting in a bar in Boston watching the game.  Carr has 2 seconds added to the clock with :30 left in the game.  Penn State is winning 25-21.  Our waitress comes over and starts congratulating us on the win with a Boston accent.  We are wearing Penn State jerseys and Yankees hats.  Words were exchanged.  With :01 on the clock, Henne tosses a TD and wins the game.  More words were exchanged. Louder.  We leave shortly thereafter.

Most painful loss I have experienced in my life as a sports fan.  Easy.

Probably the 2003 team.  I think the contributors on Wikipedia described it well enough:

Penn State finished a miserable season with a 3-9 record, 1-7 in the Big Ten, Paterno's worst ever at Penn State. It was the third losing season in the past four, and just Paterno's fourth losing season since joining the coaching staff in 1950. Nine losses were the most ever for a Penn State team, breaking the record set by the 1931 2-8 team, and did not win a road game for the first time since 1936.

Iowa at Penn State, 2004.  6-4.  Losing a bunch of games in a row is bad.  Losing a bunch of games and then being humiliated like this, well, that's your low point of the decade.  Unlike the 2005 Michigan game, which is the kind of loss that gets you fired up, this just makes you sad.  Why?  Well, because Iowa thought so little of the PSU offense that rather than punt out of their own endzone, they elected to give Penn State a free safety.  Penn State then received the ball and, on cue, Michael Robinson threw an interception to end the game.  Sigh. 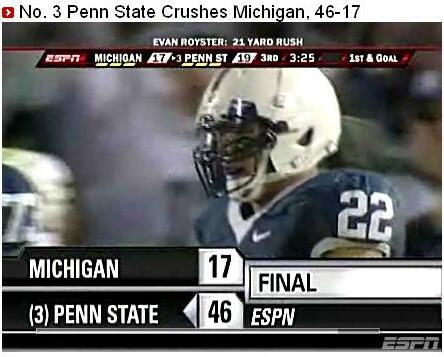 Another easy one:  October 8, 2005.  #6 Ohio State at #16 Penn State.  The first Paternoville.  The first White Out.  Kirk Herbstreit anoints the Penn State student section as the best in the country.  Second highest-rated regular season college football game ever on ESPN at the time.  Highest-rated GameDay ever at the time.

And after all the hype, the game lived up to its billing.  See 8:52 of the above video:  Down 17-10, Ohio State had the ball with 1:28 left on the clock.  Tamba Hali breaks free and turns Troy Smith into a scarlet-and-grey skidmark, the ball comes free and Penn State recovers.  The good guys run out the clock and I "may or may not have" rushed the field.

The win signaled a return to national relevance for a once-proud program.  After winning only three Big Ten games in the previous two seasons, the fans were finally rooting for the legendary Nittany Lions they had once known.  Despite the aforementioned loss to Michigan that still lay ahead, the 2005 season, specifically the Ohio State win, reinvigorated both the program and the fanbase and was a unforgettable chapter in Penn State's long history. 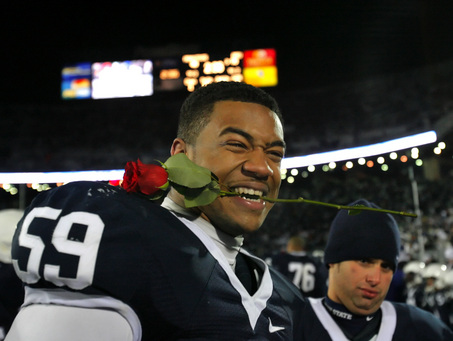 This is the kind of comparison that could easily be its own post.  Both years featured tough defenses, resilient spread offenses, and last-second heartbreakers that kept them out of the Mythical National Championship.  The 2008 team was a bit more impressive on paper: averaging 38.9 points scored and only giving up an average of 14.4, while the 2005 team scored 34.4 on average and gave up 17.0.

Really, though, I think the difference lay in the competition each team faced.  2005 beat a very good Ohio State team, but really had no impressive nonconference wins.  The #23 Florida State team they defeated in the Orange Bowl was no powerhouse.  In 2008, the squad beat another top-ten Ohio State team, but also managed to thrash Pac Ten runner-up Oregon State and end-of-season top-25 Michigan State.  The USC team they lost to in the Rose Bowl may have had as good a claim to play in the title game as any other team, and until PSU put 24 up on them was being hailed as one of the best defenses in college football history.

Hit me up in the comments with your opposition.

I would have to say either the 2005 Ohio State win or at the conclusion of the season when Paterno bested Bowden in the Orange Bowl, leading Penn State to an end-of-season #3 ranking.  Miami = awesome?  Miami = awesome.

The Tamba Hali sack is in the running here.  I think there are probably only two other plays from the past decade that are on that plane of awesome.  First, the runner up (see 2:50):

2005 Penn State vs Northwestern (via vinnymckee)

This play was really the moment that the 2005 season started to take on a special quality.  After the last two years of losing, our new, #1 in the nation recruit makes an incredible play to come from behind and win the game.  Penn Staters started looking at one another and thinking "maybe we can be awesome" for the first time in a long time.  It was a very special play, but really it was more setting the scene for the rest of the season.

It's recent enough that it probably doesn't need much introduction.  But, well, it deserves some explanation, right?  Their #1 in the nation recruit, trying to make a play to win the game, bumps outside and fumbles the game away.  Oh wait: he actually could have put them back in the game later, but he threw an interception to completely seal the deal.  And then he cried on the bench.  And then we won the conference had to share the conference title with them.

Anyway, first win for PSU in Columbus since 1978, and in front of a stadium record crowd.  A low scoring, defense-dominated game, and this one play really made all the difference.  Thank you, "LiC" Mark Rubin!

There were a lot of players in the "Aughts" that will live on in Penn State history: Larry, Tamba, Paul, Dan, Michael, Deon, and Darryl, just to name a few.  But no one player meant so much to the program as Derrick Williams:

Williams has been part of a remarkable turnaround at Penn State. Before his arrival, the Nittany Lions had suffered four losing seasons in five years. Since he first suited up for the team in 2005, they have amassed four winning seasons and three bowl victories and head into their regular-season finale against the Spartans with a chance to claim their second Big Ten title and second Bowl Championship Series berth in four years.

Individually, Williams is on pace to have his fourth consecutive 40-catch season and ranks third in school history with 153 career receptions. He’s caught 36 passes for 400 yards as a senior and has scored two receiving touchdowns. His impact on special teams has been, if anything, even greater. He’s scored three touchdowns on kick returns (two kickoffs, one punt) and was named a Mid-Season All-America kick returner by SI.com and CBSSportsline.com.

In the same article on scout.com, Williams is quoted regarding his legacy at Penn State:

"The thing is, when I was getting recruited, I had a chance to go pretty much anywhere I wanted to. But my main goal was to make a mark on a program, leave my legacy on a program and do some special things for a program to turn a program around. I think that I’ve helped out a lot as far as getting Penn State back to where it used to be. If we win this game on Saturday, that’s 40 wins in four years. There aren’t a lot of people in the country who can say that. So I definitely accomplished everything I wanted to do."

He and Justin King helped rejuvenate Penn State's recruiting.  His stats don't properly describe his impact on the field; he provided a game-changing, explosive threat every time he was on the field, and was utilized in a variety of ways by the staff.  Even now, Penn State fans speak of who will take over the "Derrick Williams Role."  Williams is synonymous with both the overhauled PSU offense that returned the program to relevance and with the "success with honor" mantra espoused by Coach Joe.