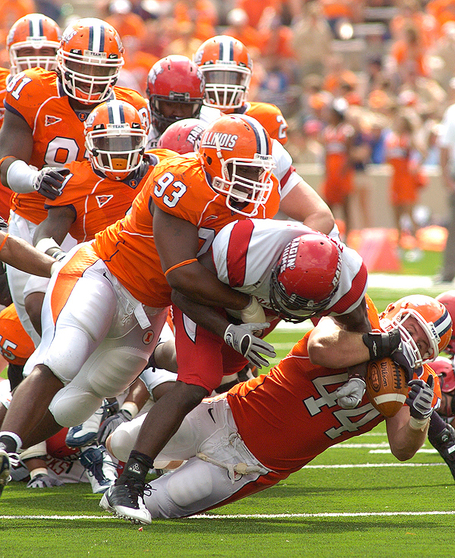 Ask me what unit will have the greatest impact on Illinois' success in 2010 and the answer might surprise you.  It's not the offensive line, or the skill positions -- although there's major room for improvement in both areas.  For Ron Zook to save his hide, he has to put a fundamentally sound defense on the field.  In 2009 the Illini ranked last in conference in scoring defense, and total defense.  Their rushing defense and passing defense also struggled.

It's easy to blame the team's defensive woes on the epidemic of injuries that depleted the squad last year -- but injuries are a part of the sport.  Ultimately, Illinois' systematic softness begins and ends at the line of scrimmage.  Consider this: Illinois ranked last in conference in 2009 in tackles for loss.  They recorded just 63 on the season, an average of 5.25 a game.  If Vic Koenning's defense is ever going to get off the field it has to get pressure on the quarterback.  That's where DT Corey Liuget comes in. 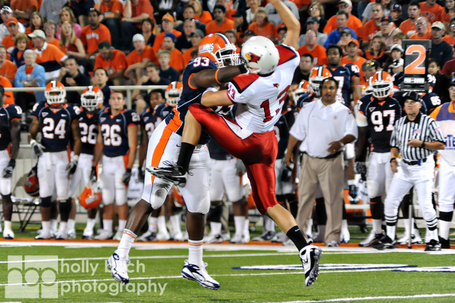 The 6-3, 300 lb junior was a four-star recruit out of Florida who picked Illinois over offers from Miami, Florida State, and LSU.  Last year he started four games up front for the Illini, and saw the field in all twelve.  Despite intermittent playing time, Liuget registered a respectable 36 tackles (15 solo), 8 for a loss.  For his efforts, Liuget was named one of the Top 10 Sophomore DT Draft Prospects.

Illinois opened spring practice Tuesday afternoon, and -- as Adam Rittenburg reports -- Corey Liuget is one of the guys Ron Zook is counting on to lead his defense.  "Corey’s had a great offseason," Zook said. "His whole mentality has changed."

Liuget's play is defined by his explosiveness off the line of scrimmage.  This tenacious tackler uses his long arms to swim past offensive linemen while maintaining his angle of pursuit towards the ballcarrier.  He's a sure tackler in space, and routinely locks up opponents by himself.  Liuget's ability to break into the backfield will help the Illini smother opposing offenses, but to truly get over the hump, they'll need to see contributions from Senior DE Clay Nurse, and returning linebacker Martez Wilson.