West Lafayette is the next stop on our regional tour.

FIFTH IN A SERIES: THE PURDUE SPRING FIELD GUIDE

Purdue at a glance...

Usually when things end in November, it's a sign of a season to forget.   But Purdue's 5-7 record (4-4 in conference) in 2009 is misleading.  On one hand the Boilermakers were every bit the model of a team in transition.  Poor special teams, and a record setting number of turnovers handcuffed the team in losses to Northern Illinois, Notre Dame, and Wisconsin.  On the other hand, the Boilers showed flashes of brilliance.  After taking eventual Pac 10 Champion Oregon to its limit in a 36-38 loss at Autzen, Purdue upset the eventual Big Ten Champion Ohio State Buckeyes 26-18.  Despite winning four of their last six games, the Boilermakers couldn't overcome a 1-5 start, and Purdue stayed home for the holidays.

Still, we couldn't help but call the squad's effort a "pleasant surprise."  In our opening Big Ten bowl predictions for the 2010 season, we put a 7-5 Purdue team in the Texas Bowl opposite Baylor.  In early February, we said the Boilermakers would open 2010 with a win in South Bend.  As for the man behind the mustache, our writers were impressed with the wrinkles Danny Hope installed into Joe Tiller's offense, and gave him a B+ grade overall.  Forever nostalgic, we also retraced the Purdue program through the Aughts. 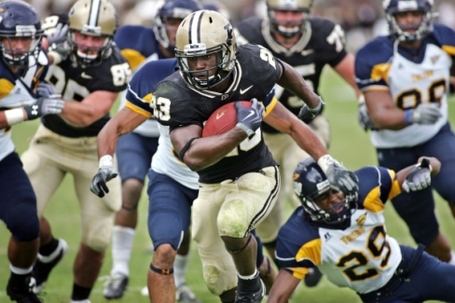 In February, Purdue signed a 24 player class that was ranked 7th in the Big Ten.  Although the coaching staff placed special emphasis on the defensive side of the ball, they did net several solid offensive prospects, including Florida four-star wideout O.J. Ross.

Last week, Ralph Bolden suffered a serious knee injury that will sideline the All-Big Ten running back for at least the rest of the spring and possibly the fall.

Purdue could surprise some teams, provided it patches up a shredded secondary and finds an adequate replacement up the middle of the defense for Mike Neal. The Boilers will again be explosive on offense with All-Big Ten selection Keith Smith (WR) and Ralph Bolden (RB) returning at the skill positions. QB Robert Marve should step in nicely for QB Joey Elliott, leaving Purdue's primary concerns across the defense. If nothing else, the Boilers should continue to score a lot of points. But teams don't typically win in the Big Ten without playing a little defense.

Although it's never easy to replace a veteran quarterback, Purdue fans have been waiting for a year to get a look at former Miami Transfer Robert Marve, whose journey to West Lafayette has been a strange and largely-forgettable one.  After being crowned Florida's Mr. Football in 2006, Marve was involved in a car accident that forced him to sit out the 2007 season in Coral Gables.  He returned in 2008, only to lose his starting job, and find trouble with the law.  He eventually decided to transfer to Purdue (Randy Shannon conditioned his release on his not going to certain ACC and SEC schools), and promptly tore his ACL.  There's no question that Marve has used his time on the sidelines to sharpen his football IQ, but it remains to be seen what effect the down time will have on his mechanics, and feel for the game. 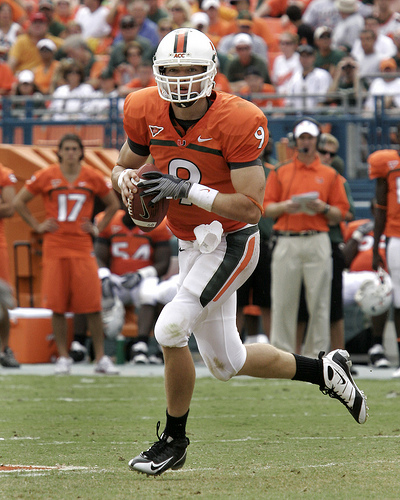 Is this the next Drew Brees?

Marve will have a more than capable target in Keith Smith, who led the Boilermakers with 1,100 yards on 91 receptions in 2009.  Things also appeared to be solid at the running back position, until Ralph Bolden went down with a non contact injury last week in practice.  Bolden averaged 77.9 yards per game rushing in 2009.  If he can't play, Sophomore Al-Terek McBurse will have to step into a feature role.

The Boilermakers also have to replace three guys up front -- with Sophomores Rick Schmeig and Andrew Brewer leading the pack.  Overall, expect Purdue's offense to continue its positive production under Hope's watch.

Not surprisingly, the real issues for Purdue are on the other side of the ball, where a ghost town for a secondary could keep the defense vulnerable to the pass.  Look for some combination of Gavin Roberts, Josh Johnson, Charlton Williams, Chris Quinn, Ishmael Aristide and junior college transfer Michael Eargle to fill the void.

1. Is Robert Marve ready to become Purdue's next big name quarterback, or have off field struggles, transfers, and injuries taken their toll?

3. What will an offensive line that has to replace three starters look like?

Purdue has a legitimate opportunity to start the season 4-0, which would go a long way towards helping the Boilers reach their first bowl game since 2007.