The bolded years indicate when Purdue's rush defense ranked last in the Big Ten. Statistics don't lie - to succeed against the Boilers, pound the rock. More statistics continue to not lie:

2008's horrendous run defense was understandable. An incredibly young defense took its licks as Tiller lame-ducked his way into retirement. But the mustachioed Danny Hope couldn't harness the real-game experience gained by his troops on the defensive side of the ball. 300 lb. Mike Neal prowled the middle, flanked by future NFLer Ryan Kerrigan and an experienced, if undersized, linebacker corps. Yet time after time, the Boilers would be overrun at the LOS, leading to time consuming, spirit killing drives by opposing offensive units.

The past is the past though, what will 2010 show? Neal is departed, but six of the other starting linemen and LB's return. The big DT, 310 lb. Kawann Short, was a Frosh All-American in 2009 and has athleticism for days, even returning a pick for a TD in the scrimmage this month. The other DT spot will be filled by, well, take it away Boiled Sports:

Bruce Gaston
6'2" 290 (+++) DT
Gaston, Melton, McDaniel, Short and Mondek in a season or so might be the most-formidable group of run-stopping DTs we've seen in WL ever. The depth at the position might lead to one of these guys heading to offense, but it won't be Gaston. I'm stoked Bruce made it to Purdue as I thought the Williams departure might push Gaston another direction.

Purdue is obviously, and seemingly successfully, attempting to improve their horrendous front line defense. The DE's return, Ryan Kerrigan and Gerald Gooden, with Kerrigan getting 1st Team All-Big Ten honors in 2010. I'm sure LawBuck or someone will profile Kerrigan, he's been a pass-rushing fiend ever since he hit the field in West Lafayette, even leading the nation in forced fumbles in 2009 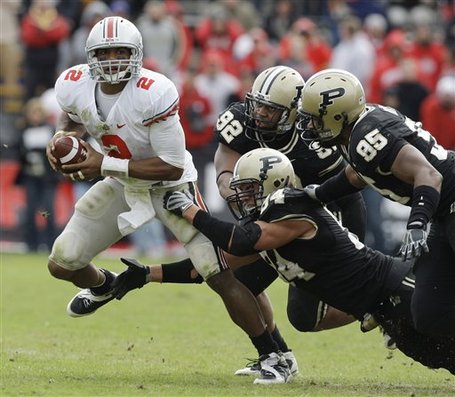 The linebackers should be a stalwart unit in 2010. Leading returning tackler (81 tackles) Joe Holland, Chris Carlino, and Jason Werner return, all with multiple years of experience.

All this discussion of talent and experience leads me to a much needed question: What the hell is really wrong with Purdue's defense? It doesn't seem to be a lack of toughness. Kerrigan won the team Pit Bull award for in-game tenacity. Werner takes great angles to ballcarriers and shows tremendous closing speed. Hell, Carlino even does his hair like The Undertaker.

Could it be a size issue? Kerrigan is 260, Gooden only 240...and the linebackers are all the exact same size (6'1'', 225 lbs). In the rough and tough Big Ten, this can be a constant problem as smaller players get beat up and lose weight as the season wears on.

As my statistical analysis showed earlier, Purdue got smashed up front throughout the 2008-9 campaigns. Although logic tells us they should be vastly improved in 2010 (experienced squad+depth+NFL talent on the line+schedule lacking opposing run threats=great success!!!), Purdue must figure out it's run-game issues before this team can contend.