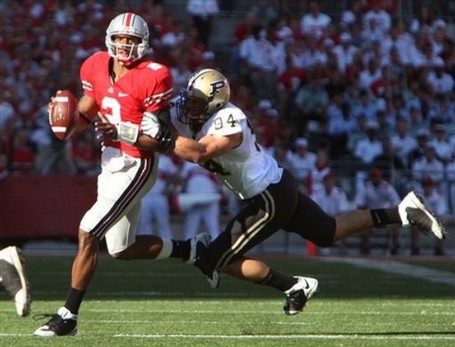 It was October, 17th 2009.  I wondered over to the 5th Avenue BW3's with a few friends to watch the seventh-ranked Buckeyes take on Purdue.  I was offered tickets a few days earlier, but declined to make the trip to West Lafayette.  The cost -- two tanks of gas, a hotel room in Indianapolis, and a pair of $65 tickets -- didn't justify the (perceived) benefit -- watching Ohio State coast past a 1-5 Purdue team.  Plus, the Red River Shootout was on.

Less than a minute into the game, I knew something was wrong.  Terrelle Pryor skated out of the pocket on a QB keeper on 2nd and 10, only to be shot out of the sky by a heat seeking missile.  Ryan Kerrigan, dressed in black (apropos?), had treated Ohio State's Jim Cordle like a subway turnstile.  The solo tackle forced a fumble at Ohio State's own 20 yard line.  It was a sign of things to come.

Kerrigan had his way with an offensive line that cranked out 200 plus yards rushing days against Penn State, and Iowa, and found ways to neutralize defensive laureates like Adrian Clayborn.  Kerrigan tied his record for total tackles (9) against the Buckeyes (5 solo), and registered a season best 3 sacks.  It's one thing to sack an ordinary drop back passer.  It's another thing to drag Terrelle Pryor to the turf.

As a junior, Kerrigan led the nation in forced fumbles (7), and was third in sacks (13).  He was placed on the Ted Hendricks Award watch list (for the nation's most outstanding defensive end, and voted first team All Big Ten, and second team All-American.  In a league stuffed with defensive line talent, Kerrigan's strength, vision, and intensity stand out.  Not surprisingly, he's earned the attention of NFL front offices.

All signs point Kerrigan putting the icing on the cake in 2010.  It's no stretch to say that he will be in the running for first team All-American honors.  The only question now, how will he adapt to leading a defense with a solid front seven, and a skinny secondary?  (Think Brandon Graham in Michigan's 2009 unit).  If opponents pick on the Boilermaker's inexperience by hitting quick slants, will Kerrigan have time to get to the quarterback?

If the past is any indication, this pass rushing phenom will continue to shine.